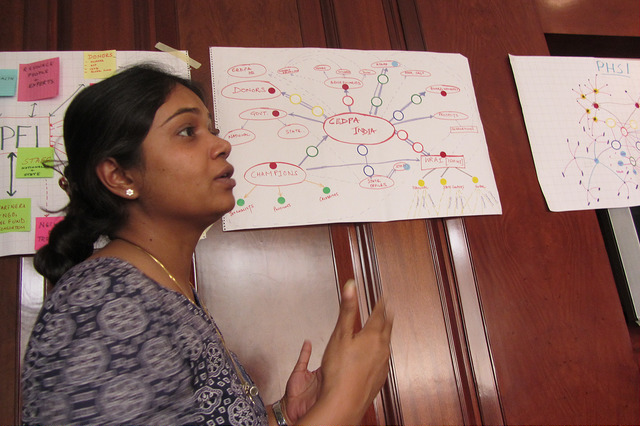 The first-ever Indian state exercise to map registered NGOs has disclosed that India has at least 3.1 million NGOs — more than double the number of schools in the country, 250 times the number of government hospitals, and one NGO for 400 people as against one policeman for 709 people. When there are so many of them, there is a race, an unhealthy one, for money and attention.

These NGOs raise 4,000 million rupees – 8, 000 million rupees in funding annually and most of it goes into maintaining the staff on payroll. NGOs form the no profit sector and are usually associated with selfless and committed work for the welfare of people. But sadly not all NGOs are necessarily formed for altruistic reasons, because in some cases forming an NGO makes good economic sense, to the founder. After all the NGO promoters come from the same society that all of us come from and there is no reason to believe that only the most honest will be involved. It does not help that “NGO” is a catchall term that covers agendas like “abolition of child labor, “ “promotion of good hygiene and sanitary practices,” “women’s rights, “ to international missions like “climate change “and “conflict resolution.”

The civil society is one of the key pillars of national governance serving as an informal watchdog and a key safeguard for human rights and fundamental freedoms. India has, however, been experiencing a exponential growth of this without the commensurate improvement in the quality of their governance. In fact the past few years have seen degeneration and unethical practices creeping into what was once a noble sector. Most NGOs are painfully mired in corruption and misappropriation of funds.

Civil society as a whole, and NGOs as a major part of it, has successfully campaigned to make human rights discourse and environmental issues a part of mainstream political agendas. They have also been instrumental in bringing into the limelight issues such as gender-based and religiously-driven segregation and discrimination, besides creating public awareness on issues pertaining to health, education and sanitation. But most importantly, they have been leading public opinion on the need to hold public representatives and government officials accountable, and on demanding transparency and rule of law in government postings, awards of public sector contracts, and the allocation and disbursal of public money.

NGOs working in the humanitarian and development sectors won official approval in the 1980s and 1990s, but there are signs now that they are losing favor. The NGO sector stands accused by some of complacency and self-interest, on the one hand, and of being ineffectual and irrelevant on the other. NGOs are increasingly challenged to demonstrate their legitimacy as representative voices of civil society. NGOs themselves are taking a hard look at their mandates, their core values, and their role on a changing international stage. My involvement with NGO sector for almost four decades has been a story of disillusionment. I have seen so many NGOs existing only in eye-popping websites and fancy brochures. There is often a total lack of professionalism. There is total lack of transparency and professionalism and exploitation of staff that are underpaid and much of the grant money is often siphoned off to the personal coffers of NGO promoters.

The Indian laws that govern NGOs are very weak and since most NGOs have political affiliations, the political parties have a vested interest in not arming them with stronger teeth. The two laws that govern the NGOs were framed more than a century ago by the British, when social and political ethics were of the highest order and the administration of laws was very stringent. These two legal regulations are: Societies Registration Act, 1860 and The Indian Trusts Act, 1882

With a mammoth size of the NGO sector, it is impossible for the State to effectively monitor and supervise them. The corporatized NGOs are subject to stringent supervision by the country’s central bank, the Reserve Bank of India, whereas the ordinary NGOs, which account for ninety percent of the sector, operate almost without any supervision. Critics have been quick to point out that NGOs themselves don’t practice what they preach. They say NGOs avoid accountability and transparency as much as they possibly can and, therefore, are quite averse to any form of regulation which they feel could be intrusive to their autonomy. Financial management and accounting is one area where they will fiercely resist external scrutiny.

There is abundant anecdotal evidence that suggests that the lacunae in laws have allowed the “family NGOs” where the board of directors and senior staff members all come from either the same family or consist of close relatives and friends. The flaws in the laws have also allowed many NGOs to resurface with new names and under a new registration, but with the same people, after donors or governments blacklisted them for mismanagement or corrupt practices. Absence of accountability sometimes leads NGOs to fund projects, which end up achieving results directly opposed to what they had originally aimed for.

One major weakness of the NGOs is they don’t have a specific mission. A project is announced and new NGOs spring up with their mission aligned with the mission of the project. Once the project is over, the mission is redefined to suit the new project. Some local NGOs do not have the institutional resources to spend even a fraction of the funds they receive. The country director of a leading international charitable organization used to dole out 20 to 30 million rupees to NGOs, which could not use even 20 per cent of the money. The same organization had to cancel  agreements with local NGOs when there was incidence of money being swept away without accountability. Several million dollars continue to be called back by the donors every year because the money could not be used due to similar problems.

Some fundamental attributes of good and committed NGOs are:

The flip side of the problem of mismanagement is over-bureaucratization of NGOs, which results in inefficiency and inertia. Many donors and their local partners sometimes incorrectly overemphasize institutionalization over effective service delivery. Some of them actually want NGOs to replicate corporate administrative structures so as to effectively take care of cash flows and other human resource problems. Such bureaucratization and corporatization of NGOs has entrenched new bureaucracies similar to the ones that the state has and which are equally cumbersome and inefficient.

NGOs engaged in service delivery are taking up the role of the state and thus enabling the state to abdicate its responsibility towards its citizens. Several NGOs are playing a big role in delivering services such as health and education belie the distinction between voicing the concerns of citizens – which is the function of civil society – and taking care of citizens, which is the responsibility of the government. An active civil society and a responsible government are both features of a democratic and forward-looking society. When NGOs are seen to possess more resources to deliver services, while at the same time still claiming to be a part of civil society, they are mixing the two factors and produce outcomes, which are not always helpful. One obvious result of the over-resourcefulness of NGOs is that the state itself starts relying upon them, for example, to carry out research or data collection.

The idea that NGOs constitute a middle space between the public sector on the one hand and the private sector on the other, is problematic. It was thought that they would be free of the profiteering and corporate methods of the private sector and the corruption of the public one. But in reality, NGOs have both features, a tendency to go after corporate salaries and perks as well as the tendency towards less transparency and accountability than is desirable.”

One major Indian sector that uses NGOs as conduits for delivery of small loans to the poor is the micro finance sector. For several years these NGOs were given soft loans for onlending to the poor to be recovered and then repaid to the lending agency after factoring their delivery costs.

There were stories emerging of beneficiaries resorting to suicides or absconding from their villages, which were attributed to the coercive practices of these NGOs, who were found to be charging interest rates almost on par with the usurious moneylenders. Some of these practices included NGOs resorting to unethical ways of recovering loans by confiscating title deeds, seizing assets, using intimidation and threats. People were reported to have had to pay unreasonable rates of overdue interest on loans in the event of even slight delay in payment of monthly installments.

This compelled the country’s central bank, the Reserve Bank of India, to cap interest rates charged by NGOs. But the remedial steps came too late. By then the economies of several villages had been ravaged and millions of poor families were driven to perpetual debt traps. One important policy change was that the NGOs had to be corporatized so that they would come under direct control of the Reserve Bank of India. There has been a significant improvement in the governance of these institutions engaged in handling microloans.

With some large NGOs having become heavily corporatized entities, where staff earn market-based salaries and where foreign money flows in regularly, it is natural to expect some kind of transparency and accountability. This includes to be able to ask if all those salaries are being paid to the right people and for the right purposes as well as to ensure that foreign funds are spent on the projects they are meant for.

But the non-corporate NGO sector, which is still huge, continues to attract huge grants, but continues to be plagued by inept financial management, poor transparency, and weak governance. When, in the past, governments have talked about bringing in new and broader legislation in this regard, NGOs have been quick to term such efforts as politically motivated curbs on their freedom to act. There may be some truth in their argument. Many NGOs are working on projects – such as reproductive health, the education of girls, etc. – which some political parties or the government may not endorse due to ideological reasons. If there exists a strong government regulatory body to oversee the working of NGOs, the fate of such projects and the NGOs working on them will heavily depend on whether a government approves of their work or not.

The burgeoning NGO sector is thus not a welcome sign. It signals continuing manifestation of corruption and embezzlement of precious grants and donor funds meant for the poor and marginalized sections of society.  These groups still languish even when huge funds continue to be deployed in the system for their welfare.