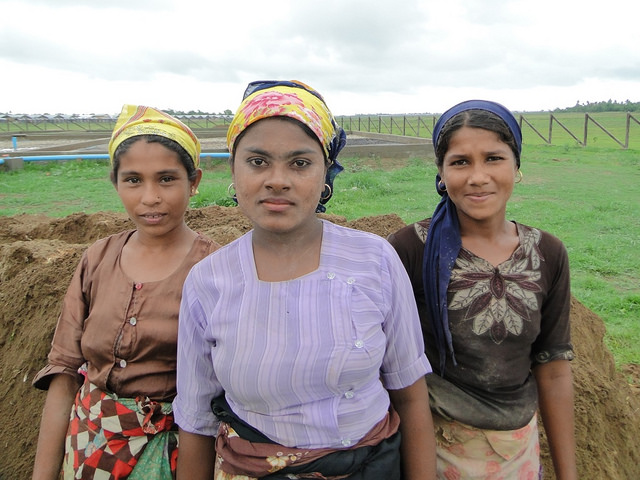 Facebook
Twitter
Pinterest
WhatsApp
Email
Print
On November 8th, the South East Asian nation of Burma will hold primary elections in what is being touted as evidence of its path towards democratization after long decades of harsh military rule. The day will have arrived as a result of years of internal and external pressure that sought to open Burma’s politics and economy. However, these efforts and indeed the very idea that Burma is transitioning to democracy is contradicted by the state sanctioned persecution and disenfranchisement of the beleaguered Rohingya Muslims; an indigenous Burmese minority.

The Rohingya are considered by the UN to be among the “most persecuted people” on the planet. In May, they were in the news described as Asia’s “new boat people” because they have been fleeing in droves from the oppression they face in their homeland—only to be denied refuge in most countries.

They are a stateless minority, whose indigenous rights and citizenship are denied by political leaders of the dominant Burmese ethnic group. Compounding their tragic situation is the factor of nationalist religion wedded to politics; a chauvinistic and Islamophobic Buddhist movement originally called 969, and now known as the Ma Ba Tha, views the Rohingya as the ultimate “other” whose very presence is an affront.

The Ma Ba Tha’s solution, in collusion and with the blessing of Burma’s political leaders is nothing short of genocide. One policy after another strips the Rohingya of their dignity and basic rights: banning Muslim schoolgirls from wearing headscarves, conjuring up fake terrorist organizations as a means to crackdown on the Muslim populace, restriction on humanitarian aid to Rohingyas forced to live in concentration camps, limiting their ability to marry and forcing them to have no more than two children.

The aforementioned are only a few examples of the policies and legislation making life a living hell for the Rohingya.

After all these indignities have been visited upon them, they are called upon to suffer another humiliating reminder of their third-class status: the denial of their right to vote. It was not unexpected, after all they have been through but still jarring in its coldness and in light of Burma’s “democratization” process.

It is a leap backward from 2010 when there was a glimmer of hope because the then military-junta issued “white cards” allowing minorities, including the Rohingya to vote in general elections. This brief hope was smothered when Thurein Htut, officer-in charge of Rakhine state’s electoral commission declared white-card holders will not be on the electoral rolls,

“Former white-card holders don’t have a right to vote in the upcoming general election according to the law despite being able to vote in the 2010 election. So they are not mentioned on the voting lists,” Thurein Htut told ucanews.com on Wednesday.

How would you feel in a country, which your family lived for generations and served its governments in various capacities, only to be repaid with hatred and state sanctioned violence? Rohingya leader Kyaw Hla Aung sums up the answer,

My father and I worked as government servants but we are regarded as foreigners. We have lived here for generations but we are yet to get national citizenship cards. And my two daughters who are former white-card holders will lose the right to vote in the election.

Disenfranchisement is part and parcel of disempowerment and its goal is exactly to make you feel as Kyaw Hla Aung does, a foreigner who does not belong in his own land.

Burma’s actions should not be unfamiliar to Americans, we still struggle with voter suppression and it is only in recent decades that we have granted universal suffrage and franchise to all our citizens. For close to two centuries rights such as voting were denied to African Americans, who faced one hurdle after another to achieve the basic rights that are due all Americans and to realize the promise in the Declaration of Independence that “we hold these truths to be self-evident, that all men are created equal, endowed by their Creator with certain unalienable rights.”

Today the Rohingya are subject to harsh laws, dehumanization and the constant threat of state sanctioned pogroms. They are denied the right to vote and face a blistering campaign of intimidation by a fundamentalist Buddhist movement that seeks their disappearance.

As conscience Americans who value honesty, democracy and abhor hypocrisy, we must tell it like it is: Burma is not on the path to democratization and progress. In fact by stripping the Rohingya of the right to vote, it is going backward.

Our own experience shows us that words of condemnation are not enough, we must actively lobby our nation’s leaders not to be short-sighted in their engagement with the Burmese government. Let us not sacrifice our principles on the altar of political expediency and economic gain – to do so would be a betrayal of the Rohingya and the values we claim to uphold and cherish.

In the midst of this sea of oppression there are efforts from governments, NGO’s and individuals to alter Burma’s anti-Rohingya policy. The Burma Task Force has organized a social media drive under the hashtag #LetRohingyaVote with the aim, at the very least, of making the world aware of the disenfranchisement of the Rohingya. Significant media attention and trending twitter hashtags will get the attention of the Burmese government. Here’s a chance, for all those moved by the plight of the Rohingya to contribute in a small way toward helping them; join the hashtag #LetRohingyaVote and make your voice heard.

Despite “Democratic” Election Hype, Life For Burmese Muslims Likely To Get Worse