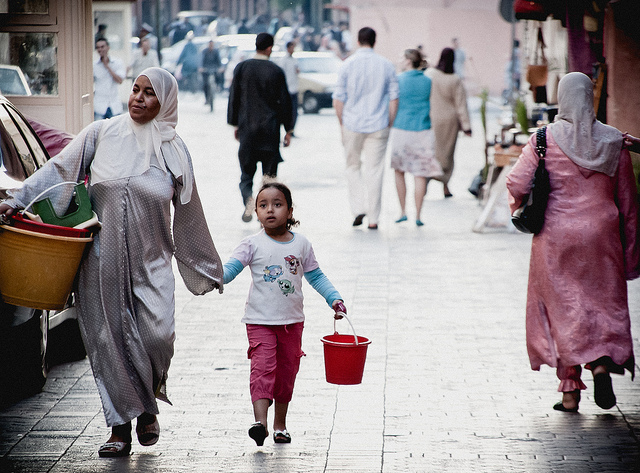 As the world draws its attention to the hundreds of thousands of refugees flooding into Europe, thousands of migrants – mostly from Sub-Saharan Africa – have poured into Morocco, escaping poverty and wars in their home countries. In a bold move by the Moroccan government, women and child migrants automatically received residency cards – a move which has left families divided: all mothers and children received residency, many fathers did not.

“I’m okay with [giving residency cards to] all women, including my wife,” said Serge Guemou, a 44-year-old refugee from Cameron. “But on the other hand, I feel like it’s kind of discrimination not to [provide residency to] husbands of the women.”

The new immigration policy came in response to a speech the king of Morocco delivered in September 2013, calling for a “humanitarian approach” to legalizing immigrants. His speech followed a report released by the National Commission for Human Rights in June 2013, titled, “Foreigners and Human Rights in Morocco: For a Radically New Asylum and Immigration Policy.”

Four months after the king’s speech, in January 2014, the government announced a year-long procedure to provide undocumented migrants with residency cards. The policy resulted from the country’s effort to implement a new immigration policy that offered migrants a path to legalization — the first immigration policy in North Africa.

The process to legalize migrants ended Dec. 31, 2014, according to Drais Cherki, a member of the Interior Ministry, at a press conference Feb. 11. The procedure was considered a success by the Moroccan government, he said, despite the fact that 9,000 migrants were rejected in the first round of applications. Rejected applicants may appeal the decision, but the committee for reviewing appeals has yet to begin.

Guemou arrived to Morocco in 2006 as a student in search of job opportunities that would offer financial support to his parents and family in his home country of Cameron, he said. Now, with a wife and son of his own to care for, he is constantly in search of work to provide for the family he has here – an already difficult task made harder for those without legal paperwork. Hoping that a residency card would lead to better job opportunities, he applied for residency in 2014 with almost 27,000 other migrants. His application was rejected.

Why? Good question, he said, shaking his head.

His wife and son, however, were among the nearly 18,000 migrants who applied for and received residency cards from the Moroccan government on Feb. 10, 2015.

For Guemou, not having residency papers means living in Rabat, where he has a better chance of finding work, he said. A 45-minute bus ride separates him from the apartment in Tamesna where his wife, Chantal Kunan, is raising their 1-year-old son.Residency cards provide migrants access to things like education, healthcare and work, said Bilal Jouhari, a spokesperson for the Antiracist Support Group for Foreigners and Migrants, a non-governmental organization known by its French acronym, GADEM.

As part of the new immigration policy, priority went to women and children because they were considered “a vulnerable case,” he said.

“[Getting residency] is a more urgent case for women,” Jouhari explained. “There are many women who are pregnant, victims of harassment, prostitution – [women are] considered a vulnerable category.”

Kunan, who arrived to Morocco at the beginning of 2013 to escape war in the Ivory Coast, said she is grateful to the Moroccan government for ensuring that all women and children received residency. Sitting on the floor of her apartment with her legs outstretched and her son balanced on one leg, she referred to it as “a royal pardon.”

“[Without any paperwork] I couldn’t go out. I stayed in my house or the house that I worked in as a maid. I had just two destinations,” she said. “I was scared of Moroccan police.”

Although her residency card has brought her a sense of security and safety, the fact that her husband does not have one poses a challenge for the family. It puts a pause on her life here, she said. There are many things he can’t do without a card.

Between odd jobs here and there, Guemou said he fills much of his time as an activist for migrant rights.

“The solution is activism,” he said. “I’m taking part in several activities and demonstrations… defending the rights of migrants. We don’t have other things to do but… to make them feel us and take care of our situation and find a solution for us.”

Amadou Sadio Balde, president of the Council for Sub Saharan Migrants, said that the strict criteria on the application for residency are what caused there to be cases of divided families. He, like other migrant activists, advocated for there to be no criteria. In the 2014 procedure, there were six criteria and migrants had to meet at least one of them – a difficult task for many migrants to meet when official proof of residency, marriage or labor isn’t easily accessible.

“This is what we strongly criticized,” Balde said. “If there were no criteria, we could avoid such problems that can give certain separation and split of families.”

According to the International Organization of Migration in 2014, family migration is one of the largest categories of migrants in most countries, accounting for about 50 percent of international immigration flows. Family migration includes family reunification and migrating as a family from one place to the next.

The NCHR approached the Council for Sub Saharan Migrants for advice on how to carry out the residency request procedure, according to Balde.

But to live in a country is not a right, said Aminata Pagni, in charge of migrants at the NCHR.

“All countries are free to receive who they want on their land, so in this [operation to grant residency], the authorities can make the criteria they want…. However, I agree that what happened with the families and children can be a problem and a violation of the right to live in a family.”

All Guemou can do is wait until his application and 9,000 others are given a second look by the appeals committee. Until then, he will do his best to support his family – even if it must be from a distance.

“I would like to live with my family in the same area,” Guemou said. “But since I don’t have the residency card, I can’t find a good job there… I decided to live in Rabat, far from them, where I can find opportunities to make a few dirhams.”