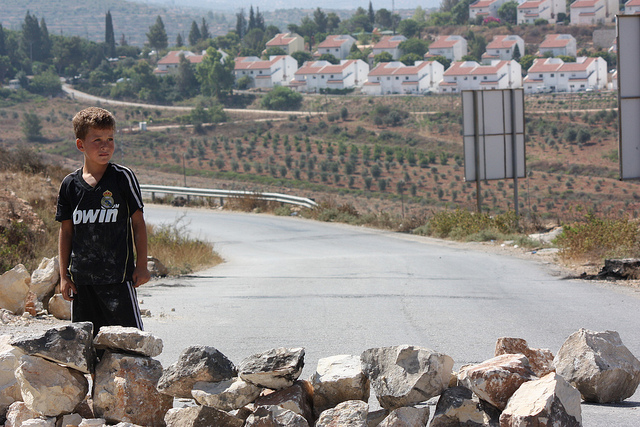 Many media outlets portray Palestinians as terrorists. However, the story of many Palestinians living through each day of the occupation of their land the best way they can is rarely told. I am fortunate to be living in a city like Chicago that has a very active Arab-American community plus many organizations that promote human rights, justice, and self-determination for the Palestinian people. Unbiased news outlets constantly remind us of Palestinian suffering as well their unreported suffering.

Modern times have created a more informed generation. The more people are aware of their rights and of human rights in general, the more there will be a push for justice. Many Palestinians have fought back with non-violence. Throwing rocks at Israeli army trucks has become so common that it has become adopted into Palestinian culture as a more peaceful defense against Israeli soldiers’ aggressiveness against unarmed Palestinians. Most people are aware of the Israeli-Palestinian conflict going on since 1948, but many still do not understand it.

Growing up, I was very involved in the Arab community on the South Side of Chicago. Because of my involvement, I never felt disconnected from my Palestinian roots, as the culture was always being reinforced and re-instilled in me apart from my family.

Bassem Tamimi is a globally recognized Palestinian human rights activist from the West Bank farming village of Nabi Saleh, with a population of about 600 people. There, he participates in continuous nonviolent demonstrations opposing illegal Israeli settlement construction and military occupation. Tamimi was invited by the president of the Student for Justice in Palestine (SJP) chapter at the University of Illinois at Chicago (UIC) campus on September 11, 2015 as part of his month long U.S. Speaking Tour. The tour is taking place nationwide from September 7th until October 19th with locations that include Wisconsin, Indiana, Illinois, New York, Pennsylvania, New Jersey, Georgia, California, New Mexico, Massachusetts, South Florida, and Washington D.C.

I was one among the full room of attendees at the SJP-UIC event. As a Palestinian-American, it was a powerful experience to hear Tamimi speak in detail about his personal, first-hand experiences as a Palestinian native, especially in a 21st century occupied Palestine. He also shared his past experiences growing up in Nabi Saleh. Tamimi explained how he has been in and out of Israeli authority detainment for more than a dozen times. He said that the Israeli justice system is nothing but unjust explaining how he spent about three years in detainment without trial. That is something unheard of in the United States, yet the U.S. allies itself with such an unjust system. Tamimi experienced brutal torture in 1993 as a result of interrogation, which left him unconscious for over a week and paralyzed for some months afterwards. For this, he has been recognized by the European Union and Amnesty International as both a “human rights defender” and “a prisoner of conscience.” In 2013, The New York Times Magazine reported on Bassem Tamimi, his family, and the popular resistance movement of which he is a part.  Recently, the Tamimi family and the village of Nabi Saleh were headlined in national U.S. news when videos and photographs of Bassem’s wife and daughter physically preventing the assault and arrest their son/brother by an Israeli soldier went viral over social media.

On August 30th of this year, an Israeli Defense Forces (IDF) soldier strangled Bassem Tamimi’s son as Tamimi, his wife, and daughter tried to stop the IDF soldier from hurting their son and brother. Tamimi spoke about this incident step by step with ease and calmness. He described it as if it was to be expected and as if it was just another day. Of course, in Tamimi’s eyes it probably was just another day living in an occupied Palestine since that has been all that he has been accustomed.

Tamimi said two things that really stuck out to me. The first was “I don’t hide my kids.” What he meant by this, as he explained to the audience members, is that he chooses to expose his children to the occupation. He said that he brings his kids with him to the demonstrations so they can be familiar with the occupation. He feels that they should know what is going on because they need to know how to react should something happen to Tamimi preventing him from protecting them. Most American parents hide their children from television shows that may seem unsuitable Tamimi probably wishes that unsuitable television shows for children were the worst things to hide from children in an occupied territory. Tamimi must be as strong as the West Bank wall to not have fallen apart after all that he has been and continues to go through with his family and community members. Aside from being a family man, he is also working just as hard to take care of his fellow neighbors and protecting what is left of his homeland. All of this is accomplished through peaceful actions such as demonstrations and/or protests.

During his talk, Tamimi noticed some teary-eyed audience members, but immediately addressed them:

We don’t want your tears because we have enough tears from the tear gas.

Bassem Tamimi is what true strength looks like in a Palestinian who is defending his family and his community within an occupied territory. He is the type of internationally recognized human rights activist that should equally be recognized in this country.