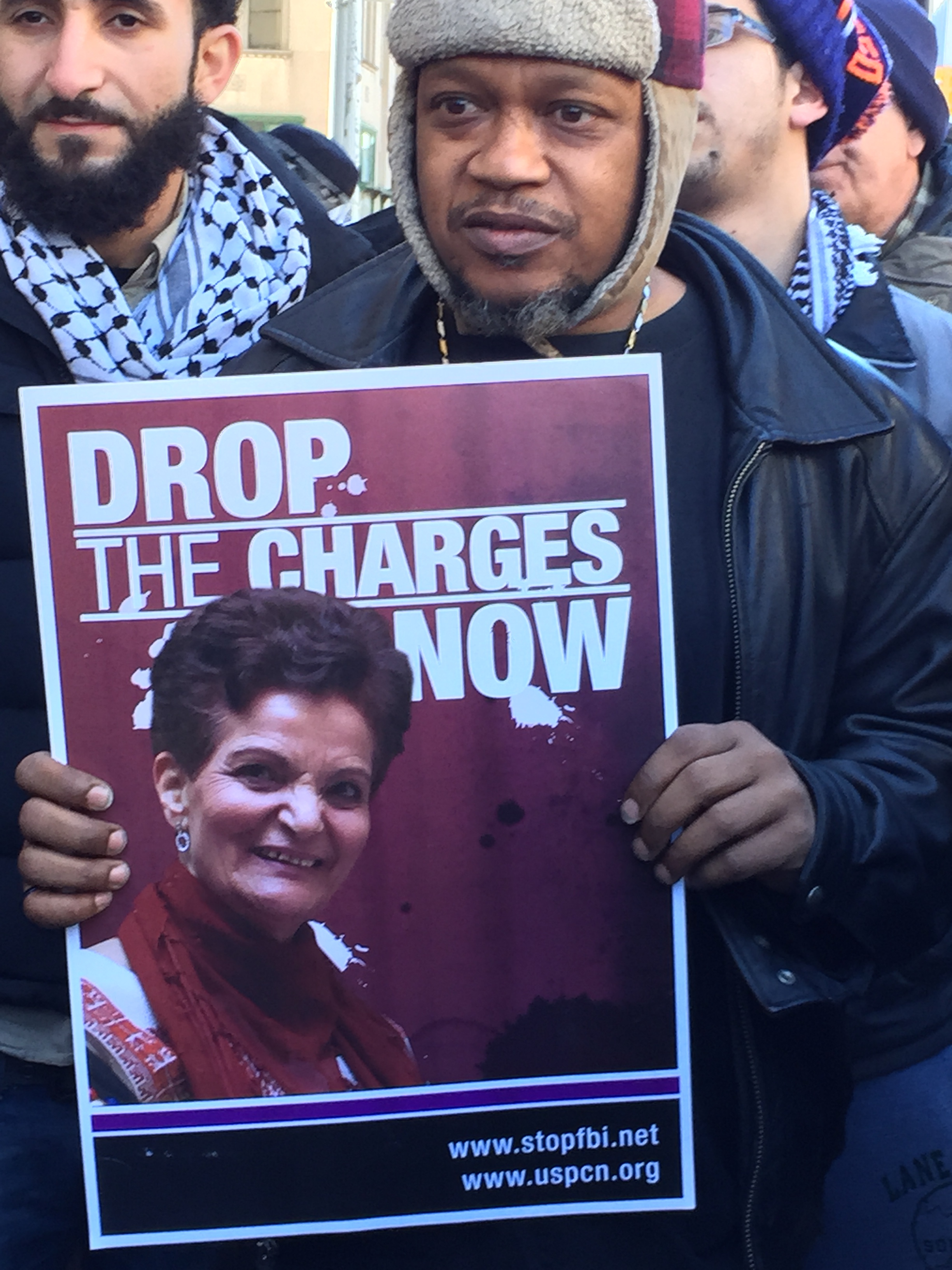 Rasmea Odeh, her attorneys, and hundreds of supporters will appear before the Sixth Circuit U.S. Court of Appeals in Cincinnati on October 14 for oral arguments on the appeal of her November 2014 conviction for “unlawful procurement of naturalization.” Her defense team insists that “justice requires Rasmea’s conviction be reversed and she be afforded a fair trial.” Odeh’s trial and conviction represents the trend of criminalizing Palestine activism that has only escalated over the last two years.

Odeh was sentenced on March 12 to eighteen months in prison, fined $1,000 and will be deported to Jordan after completing her prison time pending the results of this appeal. After sentencing, the U.S. prosecutors did agree to a deal that allowed Odeh to remain out of prison on a $50,000 bond during her appeal.

“The appeal urges the court to reverse the conviction, arguing that Odeh was denied her right to present her complete defense, and that the trial court was wrong to allow prejudicial documents from Israel’s military court. It also calls on the appeals court to resentence her to no additional prison time (she was jailed for 5 weeks after the November conviction).”

If oral arguments are allowed, it can take one to six months after the arguments for a decision. As explained by Michael Deutsche, there are a number of options that the appellate court can take.

The government case is based on the claim that Odeh unlawfully gained U.S. citizenship by giving false answers on her visa application in 1995 and on her naturalization application in 2004. The government claimed that she failed to disclose that she had been convicted by the Israelis of participating in bombings in 1969. This conviction in a military court was the result of a coerced confession made after she was tortured and raped by Israeli military authorities. As a result of that torture, Odeh has been diagnosed with chronic Post-Traumatic Stress Disorder, which, in the words of the appeal “blocked her from understanding the time frame in the questions that were answered falsely.”

At a court hearing on October 21, 2014 without the jury present, Judge Drain heard the testimony of the defense expert witness, internationally recognized, impartial expert on survivors of war trauma and torture, Dr. Mary Fabri. Dr. Fabri told the court that Odeh suffers from “chronic” Post-Traumatic Stress Disorder (PTSD) and did so at the time she filled out her citizenship application. Judge Drain ruled that Dr. Fabri’s testimony could not be presented to the jury and that Odeh could not testify about her experience with the military court, her torture, or her ongoing symptoms of PTSD.

While testimony that might have benefited the defense was denied, all of the biased Israeli government documents from 1969 describing Odeh’s conviction in a military court by a coerced confession were admitted. As the appeal brief states, Israeli military courts use “systematic use of torture, forced confessions, and other procedures wholly inconsistent with Due Process and U.S. principles of Fundamental Fairness.” Israeli, Palestinian, and other human rights organizations have continued to criticize the Israeli military court system even since a 1999 Israeli High Court ruling against torture.

In a live stream session to supporters, Michael Deutsche explained that the treaties between the U.S. and Israel that the prosecution used to justify the admission of these documents only discusses civilian court records, not those from military courts. The admission of these documents created a highly prejudicial atmosphere during the trial as the prosecution continued to discuss the details of the bombings and the names of those killed. The brief also argues these documents from Israel’s military court contained inflammatory language that unduly biased the jury against Odeh. This atmosphere was extended to those who came to support Odeh. The jury that convicted Odeh was not only shielded from all of the evidence concerning Odeh’s case, but they were also “shielded” from Odeh’s supporters (or the “protesting mob” as prosecution documents called them) by being partially sequestered and having armed marshals in the courtroom.

The defense also argues that the 18 month prison sentence should be thrown out due to Judge Drain failing to apply standard sentencing guideline adjustments in consideration of Odeh’s age, her chronic PTSD, and her over ten year contributions to the Arab community in Chicago. At the very least if the verdict is not overturned, the defense believes Odeh should serve no additional jail time.

Further Actions on the Appeal

On June 19th, the Center for Constitutional Rights filed an amicus curiae (“friend of the court”) brief on behalf of the International Rehabilitation Council for Torture Victims, Bellevue/NYU Program for Survivors of Torture, Public Committee Against Torture in Israel, REDRESS, and the World Organization Against Torture, arguing that Odeh’s trial judge, Gershwin Drain, erred when he did not allow mention of the torture or expert testimony on its effects.

“Rasmea’s Odeh’s appeal is based on her claim that her Fifth and Sixth Amendment rights were denied by rulings of the lower court which prevented her from presenting her complete defense at trial. At bottom, this claim is based on her fundamental constitutional right to a fair trial, the most basic right of any criminal defendant.”

On September 30, Palestine Legal and the Center for Constitutional Rights released a report, The Palestine Exception to Free Speech: A Movement Under Attack in the US, documenting the suppression of Palestine advocacy in the United States. The report focuses on the increasing number of cases directed at activists at colleges and universities as well as non-students involved in protests supporting Palestinian self-determination. The report states

“In 2014, Palestine Legal—a nonprofit legal and advocacy organization supporting Palestine activism—responded to 152 incidents of censorship, punishment, or other burdening of advocacy for Palestinian rights and received 68 additional requests for legal assistance in anticipation of such actions. In the first six months of 2015 alone, Palestine Legal responded to 140 incidents and 33 requests for assistance in anticipation of potential suppression. These numbers understate the phenomenon, as many advocates who are unaware of their rights or afraid of attracting further scrutiny stay silent and do not report incidents of suppression. The overwhelming majority of these incidents—89 percent in 2014 and 80 percent in the first half of 2015—targeted students and scholars, a reaction to the increasingly central role universities play in the movement for Palestinian rights.”

There is little doubt that Odeh was originally targeted for her role as a Palestine community leader and activist when she was first arrested in 2013 charged with a crime that had occurred twenty years ago. The ramp up of “incidents of censorship, punishment, or other burdening of advocacy for Palestinian rights” that escalated after the protests over Israel’s attack on Gaza in 2014 had already begun the year before. As the report notes,

Odeh is one of a long line of targets whose right to free speech is being suppressed by manipulating the legal system so that she not only is prevented from being a Palestinian leader, but that she is also deported from her country of twenty years.

Nesreen Hasan, a leader of the Rasmea Defense Committee, also emphasized this point: “This case is not only an attack on Rasmea, but an attack on all Palestinians everywhere.  When we defend her, we are defending ourselves.  And when she wins her appeal, it’s going to be a victory heard across the world!”

After her experience in court and being sentenced, Odeh said the following to her supporters

We can find justice someplace. Maybe not in this court, maybe in another place. There is justice in this world, we will find it. We will face injustice and we have to change this world, not just in this country, in all the world in all the places there is no justice, we have to bring the justice together. In spite of everything, we are the stronger people, not the government who is unjust.

The Rasmea Defense Committee has organized both cars and buses of supporters to attend the hearing in Cincinnati next Wednesday at 9:00AM.