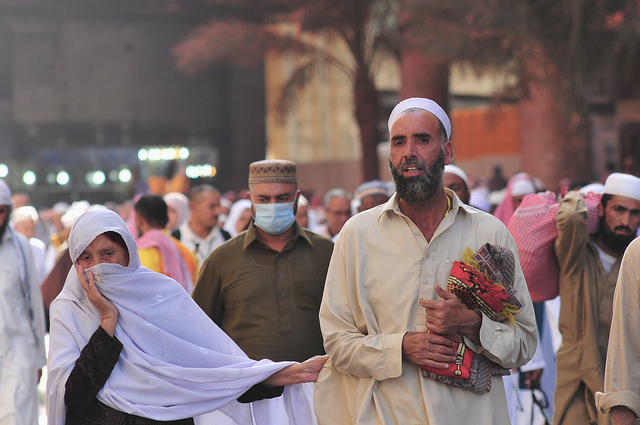 Facebook
Twitter
Pinterest
WhatsApp
Email
Print
The recent tragedies in Saudi Arabia that have led to hundreds of deaths has revived the debate on Islamic fatalism. The question of man’s control over his destiny has been a topic of philosophical debate since ancient Greece. The dilemma goes like this: If humans have the ability to make decisions, this diminishes God’s universal powers. But if God makes all decisions, humans have no responsibility for their own deeds, negating such concepts as justice and punishment.

It has become a commonplace for many to believe Islam is a fatalistic religion which teaches that everything is determined in advance and that man has no power over the consequences of his actions. But it is not as well known what this “fatalistic” attitude really means, what place it occupies in the totality of Islamic religion, and how it originated and has developed. Some critical Western scholars contend that this doctrine leads to a kind of passive fatalism, but Islamic theologians strongly deny that qadar (divine will) negates a person’s freedom to act. It merely means that when some misfortune befalls us, we resign ourselves to it as something coming from God, instead of despairing. Those who reject the theory of fatalism argue that if we are to accept this position then there should be no accountability of disasters which in many cases are attributable directly to human negligence. Also the victims of these tragedies should desist from filing suits and claiming damages against the labeled wrongdoers by accepting the event as a divine ordainment of fate.

Pre-Islamic Arabs believed that humanity was left to an inexorable fate that determined the course of life, regardless of human desire. Islam replaced impersonal fate with a sense of divine direction of all of life, as well as of personal moral accountability. Nonetheless, affirmations of God’s absolute power in the Quran and traditions led some to affirm a different kind of fatalism, sometimes called predestination, in which God’s foreknowledge supersedes human free choice. The prevailing theological compromise posited a middle position whereby God’s created actions are acquired by humans. Contemporary Islam stresses the Qur’anic support of human potential and responsibility under God’s guidance.

Today most Muslims have little knowledge about these old debates, but they live within cultural codes largely defined by the dogmatists, who gained the upper hand in the war of ideas in early Islam. In these codes, human free will is easily sacrificed to fatalism, science and reason are trivialized, and philosophy is frowned upon.

Consequently, “God’s will” becomes an easy cover for intellectual laziness, lack of planning, and irresponsibility. Muslims in positions of power often refer to “fate” to explain away their failures, while never hesitating to take pride in their successes.

Actions which may appear to us completely trivial are cast into the balance, but good and ill are not alike in weight. The Quran tells us also that a good action, however small in itself, will be rewarded many times its own weight whereas the crimes or sins we may have committed will weigh no more and no less than what they are as such. It might even be said that the scales are themselves weighted in favor of the good and since God is the source of all that is good, all that is beautiful, all that is harmonious, this is in the nature of things. So far as human justice is concerned, the Prophet Mohammad counseled all those who are obliged to sit in judgment over their fellows to “avert penalties by doubts” and this is clearly in accordance with the requirement of the British legal system that guilt must be proved “beyond reasonable doubt.”

In the present age, at least in the West, the notion of justice and, in particular, of rights has taken on a coloring that is specifically modern. People are unwilling to accept that misfortunes are a part of life and not necessarily the fault of someone else or of the system. Earlier generations in the West were taught the virtue of resignation, as are Muslims still to this day. The cry “It’s so unfair!” is heard now on every side and the subjective conviction that one has suffered injustice or that one’s rights have been infringed is a source of bitterness and unhappiness. The Muslim, while he must uphold justice so far as he can, has no right to such self-indulgence or to suppose that he can be judge in his own case. To complain against destiny is, in effect, to enter a complaint against Him who holds all destinies in His hand and whose justice is beyond questioning. Here certain Quranic verses are particularly appropriate: “And surely We will try you with something of fear and hunger and the loss of wealth and lives and crops. But give good news to the steadfast who say, when misfortune strikes them: ‘Truly we belong to God and truly to Him we return’. These are they upon whom are blessings from their Lord and mercy. Such are the rightly guided”. Life’s vicissitudes test our metal and reveal what we truly are in ourselves.

Clearly the question of balance arises once again: on the one hand the obligation to strive for justice in this world, on the other to accept the injustices which are woven into our earthly life in a spirit of resignation. Circumstances dictate which of these alternatives is appropriate. The story is told of a merchant in Muslim Spain who, when told that his ship had sunk with all his goods aboard, looked down for a moment before exclaiming: “Praise be to God!” Later a man came to tell him that the ship had been saved. Once again he looked down before exclaiming: “Praise be to God!” He was asked why he had looked down. “I wanted,” he said, “to be sure that my heart was untroubled.” Equanimity is a basic virtue in Islam. Here, perhaps, there is a clue to the reconciliation of the alternatives with which we are so often faced – to take up arms against injustice we have suffered or to accept it with resignation. The right choice can only be made if we detach ourselves from our emotions and from all subjectivism.

Men at some time are masters of their fate :

The fault, dear Brutus, is not in our stars,

But in ourselves that we are underlings.

As Malcolm Muggeridge says in his autobiography, “In all the larger shaping of a life, there is a plan already, into which one has no choice but to fit.”

We have to agree with Hamlet in Shakespeare’s immortal words:

There’s a divinity that shapes our ends,

Rough-hew them how we will

The believers in the doctrine of predestination argue that that this world, with all its frailties, weaknesses and uncertainties, was very imperfect and could insistently goad an individual towards materialistic goals – whether it was a personal selfish goal or one which had the interests of the community at large. The slings and arrows of an outrageous fortune are continuously flung at us, and as life takes turns which an individual can hardly anticipate, a thought naturally comes to our mind about the imperfectness of this world. But the knowledge of the God’s world and deep thinking (dhikr) over the vast mysteries of creation would clearly reveal to us that this world is certainly an endless phenomenon, the understanding of which is not fully within man’s reach. But there is a more perfect world beyond the one in which we live where man is not subject to the vicissitudes and uncertainties which confront him here. This world is a preparation for the world hereafter, a journey in the destination of a more perfect and eternal world. When man becomes fully convinced of his mission and purpose, the uncertainties of life are resolved and the ebb and flow of happiness and misery begin to appear as a natural cycle destined in the life of an individual. This is where the role of fate comes in. While declaring that every action of man is ordained by God, the Qur’an makes it clear that man has been given the power of reason whereby he can discern between right and wrong, and thus he alone shall have to bear the burden of his wrong acts.

There is a good summary of the attitude of Islamic fatalism in the following words in the story of Khalfah the fisherman:

“I seek refuge with God the great, beside which there is no deity, the everlasting. I turn unto him, for there is no strength nor power but in God, the high, the great. What God wills comes to pass, and what he wills not does not come to pass. Subsistence is to be bestowed by God, and when God bestows upon a servant, no one prevents him, and when he prevents a servant, no one bestows upon him “. (The Thousand and One Nights, transl. by E. W. Lane, new ed. by A. S. Poole, London 1889, III  p. 485..)

Here the religious aspect of belief in the great and good God is combined with the fatalistic aspect of God’s unalterable decree. Finally, an interesting observation can be made in the Shāhnāmah of Firdausi, the national epic of the Persians. Here we find a great number of instances where ‘Destiny’ plays the role of retributive power rewarding virtue and punishing evil. In this case we might, of course, think of an “order” or a kind of justice inherent in the nature of the world, but in the context it seems clear that Destiny is here simply a manifestation of God’s justice. (Ringgren, Fatalism in Persian epics, Uppsala 1952, pp. 17 f., 61 ff)

It is pertinent to quote here the great Indo-Muslim poet-philosopher Mohammad Iqbal, who in one of his last poems tells a praying person that even though his prayer might not change his destiny, yet it can change his spiritual attitude by bringing him in touch with the Absolute Reality:

“Your prayer is that your destiny be changed.

My prayer is that you yourself be changed.“