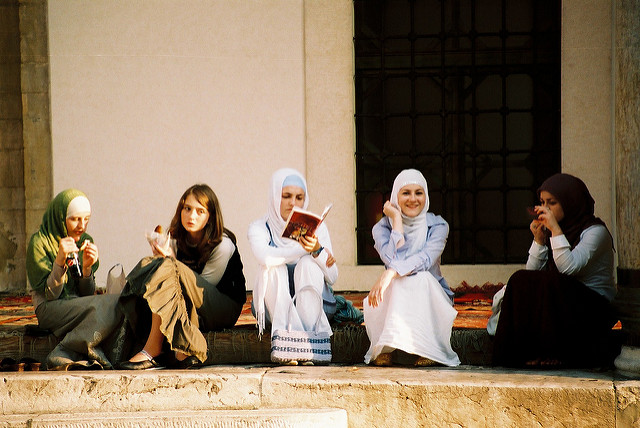 Facebook
Twitter
Pinterest
WhatsApp
Email
Print
Islam is often portrayed as an inherently oppressive religion with no possibility of cultivating gender equity. As a result of this inaccurate picture, many believe the religion of Islam contains mandates that oppress Muslim women. These misunderstandings are evident in conversations centered on the Muslim headscarf, or hijab. Muslim women across the world are often stereotyped as victims and are frequently targets of mainstream feminist and human rights campaigns. Yet these campaigns selectively ignore a history of strong Muslim feminists; therefore, ridding Muslim women of agency and privileging a created narrative of passivity and inaction.

Feminism is commonly defined as the advocacy of women’s rights on the grounds of economic, social, and political equality to men. It was not until the late-1800s that people came together as “feminists” in places like Great Britain and the United States. This initial period is called first wave feminism. Advocates during this period, specifically in the United States, were focused on women’s suffrage and more access to education. These women mostly came from privileged backgrounds and had a limited set of goals. Activists like Elizabeth Caty Stanton and Margaret Sanger came from well-off families and were had more of an ability to protest against government policies than other women at that time. With the achievements of everyone involved, Western first wave feminism brought women closer to social gender equality, but the feminist struggle continued into the latter half of the century.

The Islamic world also saw a rise in feminist thought and many a feminist—or women’s—movement started at the beginning of the 20th century. Islam was not the only influence early feminism had in Muslim majority countries—Western secular thought also greatly influenced early Muslim feminists. Ideals such as nationalism and equality were at the heart of women’s struggles in countries like Iran and Egypt, similar to their Western counterparts. While feminism in each Muslim majority country took different forms and happened at different times, Egypt has a noteworthy feminist history that can be used to better understand Muslim feminist thought.

Egypt’s women were quite involved in the country’s 1919 Revolution, an uprising in opposition to the British occupation of Egypt and Sudan. This revolution gave Egypt independence and provided every Egyptian citizen something to rally behind. The inclusive slogan “Egypt for the Egyptians” gave both men and women both reason to be included in the struggle for independence. One woman was particularly instrumental in bridging the gap between the burgeoning feminist movement and the overwhelming sense of nationalism.

Huda Sha’arawi, one of Egypt’s first prominent feminists, advocated for nationalism and women’s rights during the 1919 Revolution. During the revolution, she is cited as having “organized one of the largest anti-British demonstrations, bring out Egyptian women to the streets to protest British presence in Egypt”. It is important to note that Huda operated from a position of great privilege. Just like Stanton and Sanger, Sha’arawi’s elite status allowed her to push back against her country’s government with minimal interference. To the benefit of many Egyptian women, the activism of Sha’arawi and her colleagues continued into the following decades. The actions of these elite Egyptian Muslim feminists positively affected the lives of many women in Egypt, creating a society where women continually gained legal and social rights.

In May 1923, Sha’arawi attended and spoke at the 9th Congress of the International Women’s Suffrage Alliance in Rome. It was during this event when she discussed her vision of feminism and asserted that Islam granted women equal rights to men, but those in power misinterpreted the Qur’an. Sha’arawi’s approach to gender equality and feminism was purposefully subversive of the Egyptian patriarchy. To suggest that gender inequality was a result of those in power meant one assumed those individuals were religiously corrupt. In her logic, Sha’arawi poignantly creates a space where Islam is protected, and the blame is shifted on the restrictive laws and social impediments put forth by the government. Arguably strict interpretations of sharia and the Prophet’s life (hadith), not Islam itself, are what deprived—and continue to deprive—women of social, political, and economic rights in Egypt.

The imagined dissonance between feminist and religious identity has polarized the opinions of many women over the years. Many have felt as though their acceptance of Islam conflicted their feminist ideals. Recently, a number of Muslim women have come to the conclusion that these two identities can co-exist. Just like with more Western versions of feminism, from where Muslim women derive their feminism varies. Islamic feminists, women who draw their feminism from their faith, differ from women who happen to identify with feminist ideals and happen to be Muslim. Women of both types have helped to push for the participation of women in society.

In recent years, Muslim women have made it a point to assert their agency as Muslim women in a society that continually attempts to paint them as victims. For example, Manal Al-Sharif challenged Saudi Arabia’s driving ban in 2011 and led a movement against the patriarchal system in which she lives. The Saudi government arrested her, but she held strong to her ideals and was released shortly after the event. On the same note of women’s involvements in movements, historians and political analysts have claimed that women were key players in the Arab Spring. Muslim women are fighting for the equality of men and women—the central purpose of feminism.

There are also women who are trying to explain to the masses that their choice to wear the hijab has not been forced upon them. In a video posted in The Guardian, Hanna Yusuf tells viewers that she actually finds her hijab to be an empowering garment. If people would listen to the stories of Muslim women, these videos would not be needed. It is ignorance that continues to condemn a peaceful religion and patronize strong women.

Despite the extensive work done by Huda Sha’arawi, Al-Sharif, Yusuf, and Muslim women all over the world fighting for gender equality or equity, their stories are not well known. It is difficult to imagine Muslim women advocating for their rights when the media portrays them as helpless individuals. Their histories are not at the forefront of our minds. As a result of this media bias, many people believe that Muslim women need saving. Muslim women do not need saving. Muslim women can be, and have been, feminists and still practice their religion. They have been their own advocates for more than a thousand years. Muslim feminists do not need anyone’s assistance, just a bigger stage.