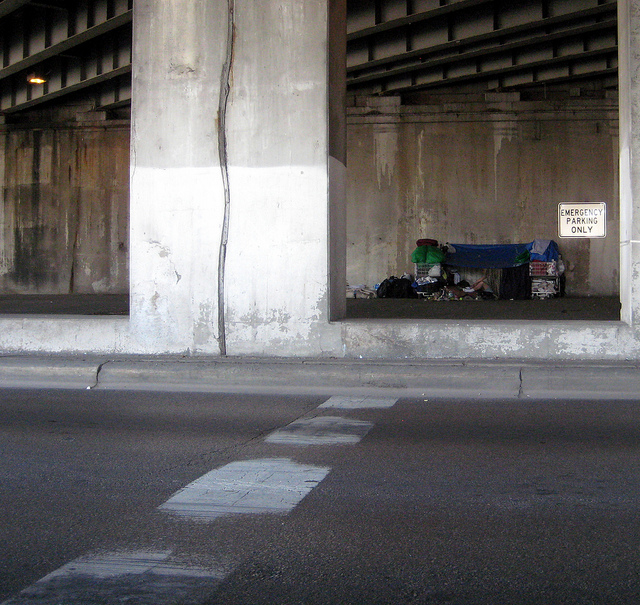 As winter approaches, many families will be seeking warmth and comfort in their homes. However, many individuals do not have the accessibility to shelter, and struggle to find safety and relief on a day to day basis. The National Alliance to End Homelessness says “On a single night in January 2014, 578,424 people were experiencing homelessness — meaning they were sleeping outside or in an emergency shelter or transitional housing program.”

There is a vast variety of causes that leave many individuals homeless. The National Student Campaign Against Hunger and Homelessness (NSCAHH) says the reasons for homelessness range from economic to social and mental factors. The NSCAHH states that “There is a severe lack of affordable housing in the United States. The growing gap between wage earnings and the cost of housing in the United States leaves millions of families and individuals unable to make ends meet.” According to the National Low Income Housing Coalition (NLIHC), “There is no state in the U.S. where a minimum wage worker working full time can afford a one-bedroom apartment at the fair market rent. The federal minimum wage remains at just $7.25 per hour in 2015 and has not been raised since 2009.” Organizations such as the Fight for 15 has sprung up to fight against low wages of the working class. The Fight for 15 campaign seeks: $15/hour living wage and the right to form a union without retaliation. So far New York has been the first to raise the minimum wage to $15. Just several months ago Chicago raised their minimum wage to $10 an hour. “Chicago is the latest major city to give minimum wage employees a raise. Last year, Seattle officials approved a phased-in $15 wage. In California, San Francisco voters approved $15 in November, while Oakland OK’d an increase to $12.25.”

According to the 2013 National Homeless Assessment Report, 32 percent of the homeless were 25 years or older (or 70,868). Nearly one-quarter (23 percent or 138,149) of all homeless people were children, under the age of 18. Ten percent (or 61,541) were between the ages of 18 and 24, and 67 percent (or 410,352) were 25 years or older. Child homelessness in America is at a significant high. Newsweek says that the data from the U.S. Department of Education (DOE) “identifies six major causes contributing to the unprecedented rate of child homelessness: high poverty rates, lack of affordable housing, racial disparities, challenges of single parenting, domestic violence and other traumatic experiences, and the lingering effects of the recession.” These major causes about homelessness are not properly conveyed to the public. Often, the mainstream media stereotypes the homeless portraying them as lazy, insignificant, mentally ill, or battling an addiction. However, that may not always be the case. There are various factors that contribute to why an individual might be homeless.

Dr. Aviles, Assistant Professor of Education at Northeastern Illinois University, and also author of a new book “From Charity to Equity—Race, Homelessness, and Urban Schools” spoke with me about some of the issues of child homelessness. She expressed that a few of the significant factors that contribute to child homelessness is a lack of affordable housing, issues of abuse and conflict, and often occurs with LGBTQ youth or youth that question their identity/gender. Dr. Aviles described how race and class is also a significant factor in homelessness. In an article by City Limits, it was expressed that

The blunt reality is that black Americans are greatly overrepresented in homeless shelters across the United States. In 2010, one out of every 141 black family members sought refuge in a homeless shelter, a rate seven times higher than members of white families.

Aviles talked about how poor people of color are marginalized, and they are not treated the same way as other poor people. Often, people’s perceptions are based on race and class. Throughout U.S. history, housing discrimination has been ever-present, both in the form of official government policies and societal attitudes. Aviles also spoke with me about how the new budget cuts are affecting many of the homeless shelters. Since Illinois Governor Bruce Rauner was sworn into office in January of 2015, services have had to bear the brunt of losing many of their programs, because of Rauner’s new budget plan. Homeless shelters are just one of the many services negatively impacted because of the recent budget cuts. According to an article by the Chicago Coalition for the Homeless,

Governor Rauner’s proposed cuts to critical homeless services would impact an estimated 12,582 households, eroding an already insufficient safety net for families and children. Even at this year’s funding levels, emergency shelters will turn away more than 45,000 households due to lack of capacity. With these cuts some of our state’s most vulnerable members, including more than 1,300 homeless youths, would lose life-saving shelter and services.

Many of these shelters do not have enough funds to provide youth with the proper services they need. Although these shelters are struggling with low funding they are still running strong. Aviles said a few of Chicago’s youth shelters include the Teen Living Program, La Casa Norte, and Unity Parenting & Counseling, Inc. All of these shelters strive toward the goal to provide housing and many other services to the homeless. Aviles also expressed that we must develop a better understanding about housing instability. Homelessness is more of a complex issue than it is made out to be. Most people when hearing of homelessness assume adults only experience it, but we must also remember that there is a growing number of child homelessness in the U.S. According to a report card on child homelessness “2,483,539 children experienced homelessness in the U.S. in 2013. 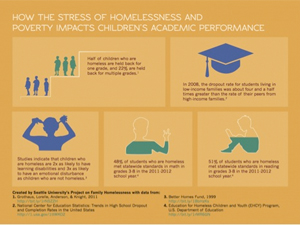 There are numerous cities across the country with large homeless populations, and it continues to rise. Chicago is the 18th city with an increasing population of homeless. According to the Chicago Coalition for the Homeless, “Chicago Public Schools (CPS) served 22,144 homeless students during the 2013-14 school year, another year-end record for the city’s public schools. It is an 18.6% increase from the prior year’s homeless enrollment of 18,669 in 2012-13 – which itself was an 8.2% increase.” As one can imagine, not having stability and a proper home can take a heavy toll on a child’s well-being and development. Only 51% of homeless students meet state standards in reading, grades 3-8. Only 48% of homeless children meet state standards in math and science.

Homeless youth also go hungry at twice the rate of other children, they’re four times more likely to show delayed development, and twice as likely to have learning disabilities as non-homeless children.

Homelessness and poverty can have an extreme impact on a child, behaviorally, emotionally, mentally etc. The National Traumatic Stress Network expressed that “Half of school-age homeless children experience anxiety, depression, or withdrawal compared to 18 percent of non-homeless children.

By the time homeless children are eight years old, one in three has a major mental disorder.

Many homeless youth also face extreme difficulties just trying to make it to school. The New York Times spoke with a few people who have faced eviction or became homeless. One in particular was a straight A student whose family had been evicted and was placed in a shelter on the other side of the city. The girl “described the two-hour journey she had been making each way between the hotel and Brooklyn Latin School, riding two trains, the ferry and a city bus.” These children struggle to find stability in their lives, but still they persevere and show up to their classes. This can be seen as resilience, and courage in the face of crisis.

Many organizations, and groups, are taking the initiative to reduce the number of homeless. “In 2009, President Barack Obama created the Homelessness Prevention and Rapid Re-Housing Program (HPRP), a $1.5 billion program funded by the American Recovery and Reinvestment Act (ARRA). This new federal program represents a significant change in the way the country has approached homelessness – moving from an emphasis on shelter and soup kitchens, which manage the problem of homelessness, toward rapid re-housing and prevention strategies, which can help end it.” The government also passed a law in 1987 called the McKinney-Vento. This law “…ensures immediate enrollment and educational stability for homeless children and youth. McKinney-Vento provides federal funding to states for the purpose of supporting district programs that serve homeless students.”

While the government is taking steps to help reduce homelessness, and provide them with better services, there have also been many organizations and shelters that have sprung up to help aid the homeless. One of Chicago’s organizations that supports the homeless is the Night Ministry. According to their fiscal year fact sheet, in 2012 “The Night Ministry’s Programs provided housing, health care, and human connection to over 7,891 youth and adults throughout FY12 (July 1, 2011−June 30, 2012). The Youth Housing Programs provided safe shelter to over 650 homeless youth and their young children. The Night Ministry also provided over 189 former residents with continuing care services.” As previously cited. The Chicago Coalition for the Homeless (CCH) is another organization that dedicates itself to helping the homeless. The CCH was founded in 1980. They describe their organization as “the only non-profit in Illinois dedicated to advocating for public policies that curb and can ultimately end homelessness.” The organization leads strategic campaigns, community outreach, and public policy initiatives that target the lack of affordable housing in metropolitan Chicago and across Illinois.”

Just recently, The Los Angeles Times announced that L.A. has the largest homeless population in the U.S. “L.A.’s chronically homeless population has grown 55%, to 12,536, since 2013, accounting for almost 15% of all people in that category, HUD reported. More than one-third of the nation’s chronically homeless live in California.” “An analysis by CCH estimates that 125,848 Chicagoans were homeless in the course of the 2014-15 school year.” These homeless Chicagoans, especially the children, are not receiving the full services they require. Governor Rauner’s existing and planned cuts to aid to the homeless will only make this problem a major crisis over the next winter months. Organizations like CCH and The Night Ministry deserve to be fully funded by our state government. If you want to take action on this growing problem in Chicago, contact the Governor’s office and your local state representative to demand that this funding be restored.

This is not a rising problem in Los Angeles and Chicago alone, this is a problem that our nation is facing. The homeless population is increasing, the cost of living is increasing, and for many people living wages are not enough to afford housing or other basic necessities. Our country must do more to help the homeless population by providing better services and affordable housing for everyone.