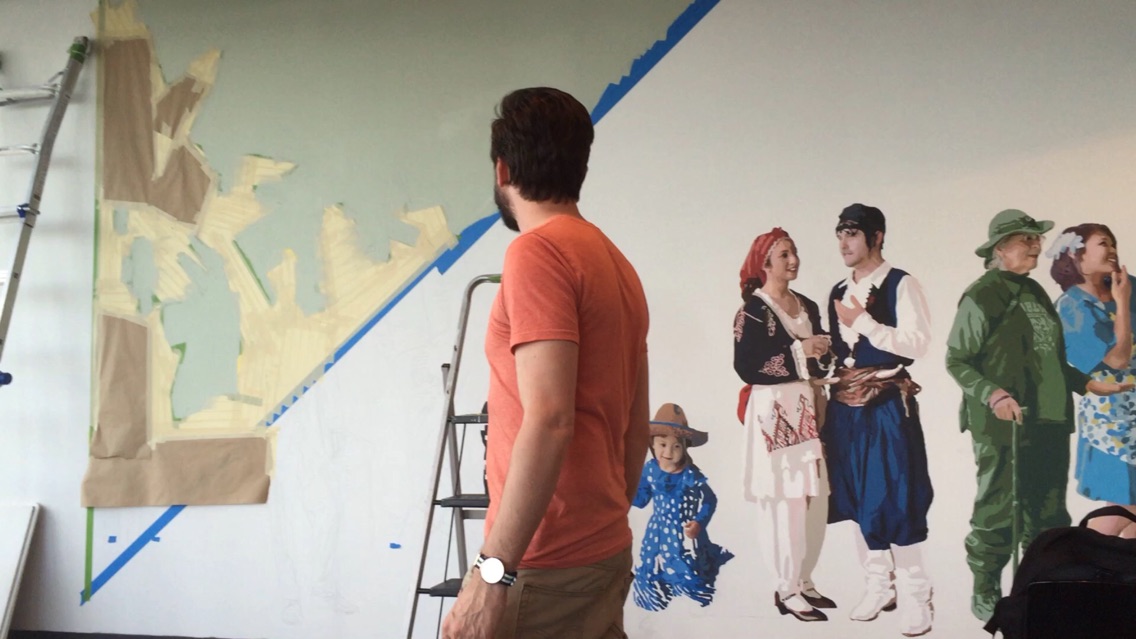 Facebook
Twitter
Pinterest
WhatsApp
Email
Print
Pete Nawara may have completed Navy Pier’s 100-foot-long mural only a month ago, but he’s already referred to as the “artist who painted the mural” by many, including colleagues and friends. The mural, which depicts Chicago’s diversity through its “Neighborhood’s of the World” series at the Pier’s Crystal Garden, is Nawara’s biggest commissioned project to date.

“I heard through a friend that there were lots of renovations happening at the pier, and so I put in a proposal suggesting the concept of sourcing a mural’s subjects from the visitors at the pier.” said Nawara. “The organizers got excited and mentioned the neighborhoods of the world event held February until the end of March, with a different culture presented every Sunday.”

Nawara, 37, took almost 10,000 pictures for the mural, spent days choosing the most engaging photos, and then pieced them together as a series for the Navy Pier Mural.

Indeed, the mural includes men, women and children of various ages, dressed in both traditional garb and casual outfits. Indian women in dancing positions and sightseers overlap to create a mural depicting Chicago’s many peoples.

“I’ve always painted and drawn, but have been doing it from a professional standpoint for ten years,” he said. “I like to play with color and composition, rather than blending things softly.”

Yet his signature artistic style, which focuses on the human figure with a “topographic feel,” a style that spurred his career as a commissioned artist, is expanding to include more artistic detail. It’s all part of an effort to produce new work for Chicago galleries.

The 2005 Parsons Paris School of Art & Design graduate says he feels his experience as a traveling artist and working on individual projects spurred his current efforts to create a new series of paintings.

“Almost immediately upon my return [to the US], I got an offer to do live paintings while touring around the nation,” said Nawara.

“I’m taking a breather from hustling and taking a month to lock myself in studio,” said Nawara. “I’m really interested in time to do personal and creative work.”

By “hustling” he’s not only referring to commissioned work, but also to work produced quickly. For the live paintings, he traveled with bands and produced a painting in 3-4 hours; the work also focused on themes of silhouettes and human form.

“The Pier was really great because they took a hands off approach where it came to creativity and design.” he said. “It was really an amazing opportunity that has afforded me the opportunity to work around more personal concepts.”

The Logan Square artist says he’d like his new art to be a journey that will incorporate both his traditional style and fine-art detail.

“I’m hoping to create a new collection of works that will not only include paintings on the wall, but also some installation works that will add an interactive and interior design feeling.”

Nawara’s studio is located beneath the interior design firm Studio K (where he is the resident artist), and he finds himself inspired by the work that they do.

The Chicagoland native says studio work is slower and more detailed than work done live or on murals. It now takes him weeks to complete a single piece. Two canvases were recently prepped before he meticulously painted details of his subject’s features and form.

Though his income is on a still stand, his experience and detailed efforts will pay off: paintings done for live shows in 2007 costed $40/sq. foot; today he’s charging $300/sq. foot for studio paintings.

As he focuses on creating installation spaces that could work in a gallery as well as in local homes, he can’t help but feel a greater connection to his roots.

“This is my city,” he said. “I’d love to have shows in other cities, but Chicago is my home, and right now that’s where I’d like to show.”

Additional examples of Pete Nawara’s work can be found on his website.