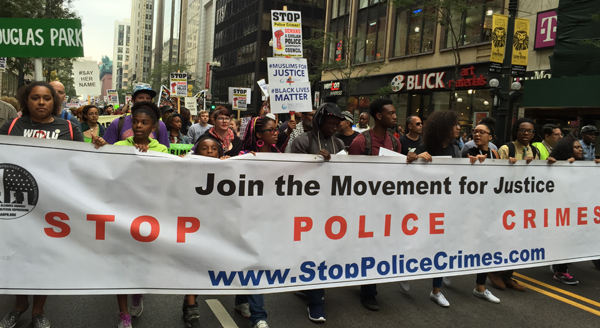 Here in Chicago, on August 29, 2015 when we took 3,000 people to the streets calling for community control of the police, we said the movement had entered a new stage of struggle. Now we are faced with new challenges as we transition from spontaneous rebellion to organized resistance and conscious political struggle. As a result of our work in the neighborhoods (in Chicago) we have 25,000 supporters and about 800 volunteers. We need to study closer the ideological, political and practical implications of this change, this new development.

This change in and of itself means that we have been and are passing through some very difficult times. Constant police assaults that brutalize and murder our people, increased economic and social devastation of the urban proletariat, shameless acts of racist violence accompanied by the spread of racist driven terrorism, spontaneous rebellion and chaos in organization aggravated by the overall intensification of racist and political repression. These are the conditions that inevitably confront us as we continue to build a mass movement to stop police crimes. These are the very conditions that agitated our movements into existence in the first place.

With the murder of Trayvon Martin we saw the emergence of organized resistance in Florida with the Dream Defenders and in the nation with Black Youth Project 100.

With the Ferguson Rebellion came a new wave of protests and organized resistance that was simultaneously local, national and international. It was greeted with solidarity demonstrations in the U.S. that resounded around the world. It was clear to us that Ferguson ushered in a new era in the struggle against police crimes and a new political challenge. Ferguson charged the atmosphere so that when no indictment was issued against the murderer of Eric Garner, the people rose up stronger, and thus emerged the Black Lives Matter Movement.

The powers that be are working overtime to destroy the emerging centers of resistance to police tyranny in Ferguson, New York, Baltimore, Cleveland and other cities. And in Chicago they are putting forth a stupendous effort to prevent an organized, united struggle against police crimes.

Of course our answer to every attempt to create disarray and disunity in our movement is to intensify our efforts to organize the people. That is why we will go to the Department of Justice (DOJ) again this year (December 10, 2015) demanding investigation of the police criminals and full blown prosecution.

For the last three years, we have responded to the possibly of mass uprisings against police crimes by calling for and organizing a mass struggle for an all elected Civilian Police Accountability Council (CPAC). Through peoples’ hearings on police crimes, community forums and mass protests in the streets we have heightened the consciousness of our movement and played a significant role in dispelling illusions of the police being held accountable by the present Police Board and the Independent Police Review Authority. In Chicago, as in the nation, police crimes are not prosecuted, they are covered up.

On August 29, 2015 we marched on City Hall demanding enactment of CPAC. On a rainy day we had 3,000 people come out. This was an expression of the fact that the movement has developed to a higher plane, that the broad masses of workers and racially and nationally oppressed peoples are acquiring the practical experience needed to bring about a systemic change, a change that will empower the people to hold the police accountable for the crimes they commit.

It is important for all strands of the peoples’ movement to join us in the campaign for CPAC, this fight for the democratic right of our communities to control the police.

The democratic rights of the people to organize and protest against social injustices is eroded and destroyed by racist police repression and tyranny. That is why we must all rise up together against this tyranny and demand community control of the police.

JOIN US! Contact the Chicago Alliance Against Racist and Political Repression at (312)939-2750.

Would the Chicago FAIR COPS Ordinance Make a Difference?