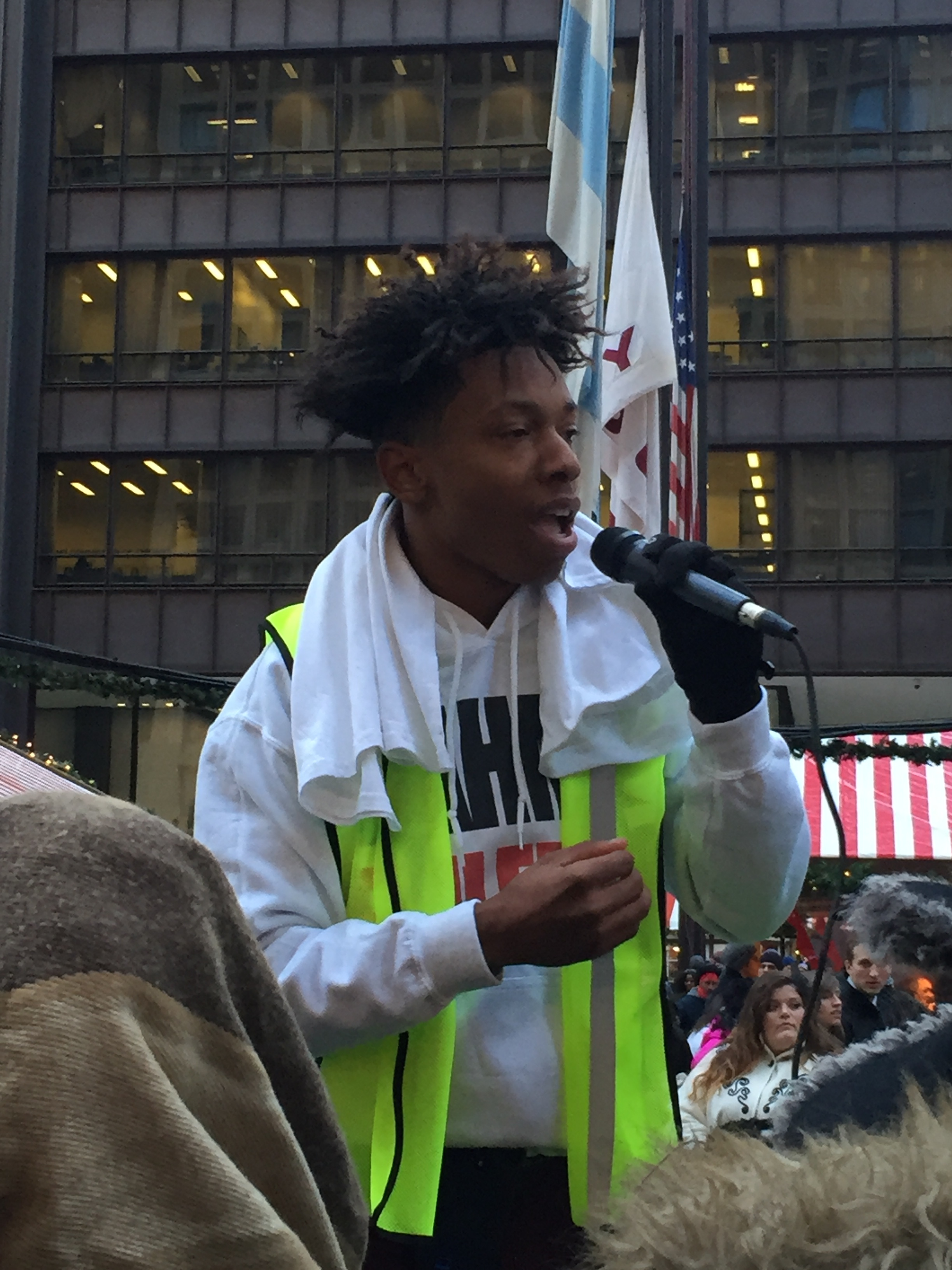 Yesterday Chicago youth activists from groups like Fearless Leading by Youth (FLY) and from high schools around the city lead 500 protestors from Daley Plaza to City Hall to Michigan Avenue demanding the ouster of Mayor Rahm Emanuel and Cook County States Attorney Anita Alvarez. Coming off of the success of the resignation of Police Chief Gary McCarthy, the crowd now chanted “One down, two to go.”

After a rally at Daley Plaza, where multiple speakers challenged the city to “stop killing our youth” and to support “community control of the police,” the youth led protestors in a march around City Hall and beyond, tying up holiday traffic in the Loop to remind Chicagoans that “No justice, no peace, no racist police.” Youth activist Lamon Reccord called for the resignation of both Rahm Emanuel and Anita Alvarez for their part in the cover-up of the killing of Laquan McDonald. He also emphasized people needing to come out and vote – especially to get Anita Alvarez out of office. Rousemary Vega, along with Reccord the protest organizers, threw T-Shirts with “Rahm Failed Us” out to the crowd chanting “16 shots and a cover-up.” Balloons were released to remember all sixteen shots that CPD Officer Van Dyke had made into Laquan McDonald’s body.

Another youth activist, Jamar Green, reminded the crowd of the “schools shut down, while millions went to families who were victims of police violence.” The power of youth in the city to affect change was called out by Reccord to Fearless Leading by the Youth (F.L.Y.), who were recently successful in their long campaign to demand that the University of Chicago Hospital provide a trauma center for the south side. Frank Chapman from the Chicago Alliance Against Racist and Political Repression (CAARPR) commended the youth for leading this struggle, reiterated the demand for community control of the police, and finished with “Power to the People!”

To chants of “These are our streets, these are our kids!” and “Stop killing our young people!” the well-organized and peaceful marchers circled City Hall and continued onto Michigan Avenue to remind all holiday shoppers – “Hey hey, ho ho, Rahm Emanuel has got to go!”

This is the second walk-out protest in one week where students and workers have left their jobs and schools to demand the Department of Justice not only investigate police killings in Chicago, but also Mayor Rahm Emanuel’s role in the year long cover-up of Laquan McDonald’s shooting. Every community in Chicago has been participating in these protests for weeks and there is no indication that the holiday season is going to bring an end to the demands for true change in the city’s justice system.