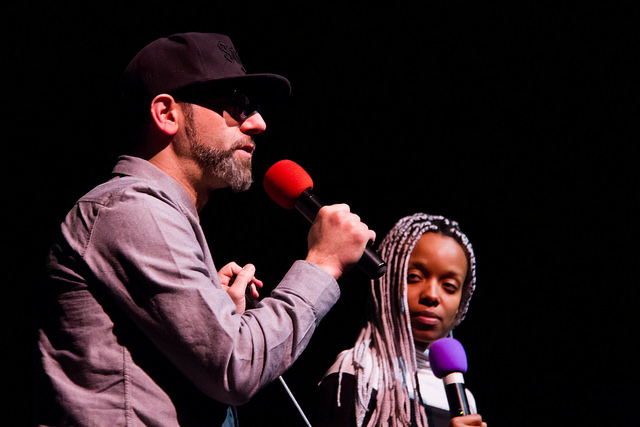 On December 2, 2015, Maine East High School in Park Ridge hosted their seventh annual poetry slam called Louder than a Lawnmower (LTAL). For those that may not know, LTAL is a sister slam of Louder than a Bomb (LTAB). Co-founded by Chicago poet Kevin Coval in 2001, LTAB has become the largest youth poetry festival in the world.
According to The Young Chicago Authors (YCA) host of LTAB “the event attracts 1000 participants from 120 schools in over 100 different Chicagoland zip codes.” The suburban poetry slam was held from 10:00AM to 4:00PM with eight schools competing. Each of these high schools has a poetry slam team led by a coach. The rules are that poets from each school are able to perform a poem they’ve written and judges score them from one to ten with ten being the highest score. There are four bouts, so each school is able to compete four times, with either a separate individual piece, or a team piece.

The day began with a writing workshop led by Coval. Everyone in the room was handed a poem called “Ode to the First White Girl I Ever Loved,” By Jose Olivarez who is another teaching artist at YCA, and a graduate of Harvard University. Coval read the poem out loud, and then there was a short discussion about the piece. After the discussion, there was a ten-minute writing exercise. The audience was asked to make a list of a few different things. Some of the things included writing a list of places you go to hang out, or celebrate, write about words you use, that other people may not such as slang, and write about things you like that you are not supposed to. After that, the audience was asked to write their own poems about one thing from the list. A type of ode, maybe a poem praising something good that is not often praised. After ten minutes of writing, everyone was divided into groups to share their poems. Around 11:00AM everyone took a lunch break and the first bout of the slam began at 12:00PM.

The slam was hosted by YCA teaching artist, Jasmine Barber. Between breaks host Jasmine Barber would share her wisdom with the crowd. During the lunch break, Barber had everyone stand up, and raise their hands above their heads and push down any weight they may be holding into the ground, and breathe. She advised everyone to get that negative energy out. She said “You’re different, embrace that. There is nobody else like you.” The crowd gave a cheer of agreement.

Each performance was heartfelt and sometimes chilling. Many of the performers wrote about their personal stories, and experiences. One poet from Niles West High School wrote about her mother, and the Bosnian Genocide, two poets from Schaumburg High School performed a piece about Asian stereotypes and Westernized culture. There were poems about war torn countries, body image, being a LGBT youth, families, and love. Each performance ended with loud applause, and snaps from the crowd. If a performer forgot a line, people from the crowd would shout encouraging words and quietly snap. There would be people in the crowd saying things like “it’s okay”, “you got this.” It was a homey atmosphere, and everyone was there to support one another. Towards the evening, it was announced that Schaumburg High School took third place, Maine East High School took second, and Niles West High School took first place.