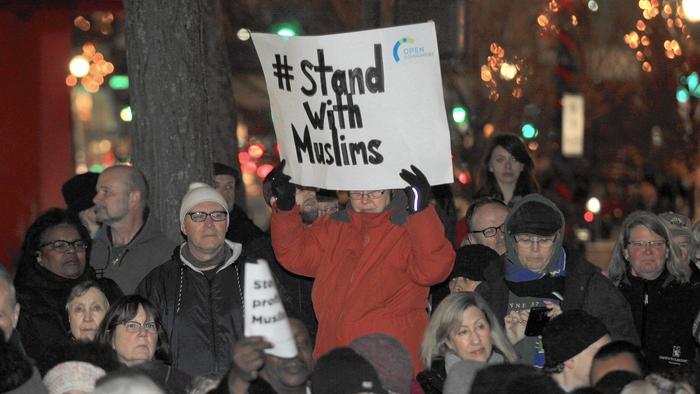 Over 200 supporters gathered in Evanston Fountain Square to express solidarity with Muslim-Americans on Tuesday, Dec. 15. The event coincided with the airing of the fifth GOP debate. Numerous speakers expressed their frustration with Islamophobic rhetoric in election campaigns and its effects on America.

Lesley Williams, the event coordinator, welcomed supporters to the square where a colorful Christmas tree and menorah lit up the night. Williams said she decided to plan the #StandWithMuslims event last week and found almost 20 organizations willing to help even at short notice. Co-sponsors that joined in objection to Islamophobia included the American Friends Service Committee, Council on American Islamic Relations – Chicago, Interfaith Action of Evanston, YWCA Evanston/North Shore, and Jewish Voice for Peace Chicago.

Speakers shared stories of discrimination and called for action. Tahera Ahmad, a chaplain at Northwestern University, began the meeting with a recitation from the Qur’an. She told supporters that she was frustrated with being viewed as less of an American because of her faith, but that she has hope for the future because of events like #StandWithMuslims.

Renner Larson, Communications Director of the Council on American-Islamic Relations – Chicago, spoke about the concepts of patriotism and diversity. He listed local attacks on Muslims or those perceived to be Muslims by the attackers. Holding a pocketsize Constitution, he said the conflation of patriotism and hate speech is inherently against American ideals. Larson frequently speaks to media about the double standards used against Muslim-Americans.

Other speakers included Niles North High School student Bushra Amiwala, Rev. Michael Nabors of Second Baptist Church, and Gabriel Machabanski of Open Communities. Each speaker shared a different perspective of Islamophobia, but all agreed that the bigotry must end.

Supporters traveled from the neighboring suburbs. One individual, whom Tahera Ahmad had met, traveled a hour to attend. Community leaders also attended in an act of solidarity. Morton Schapiro, President of Northwestern University, and Evanston Mayor Elizabeth Tisdahl were among those in the crowd.