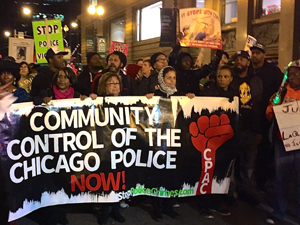 On December 10, 2015 International Human Rights Day, over 500 people rallied and marched in Chicago, demanding an elected Civilian Police Accountability Council (CPAC) – meaning true community control of the Chicago Police Department (CPD). But as has been true every time Chicagoans in the hundreds have made this very specific demand, the Chicago local media as well as the Mayor’s office and City Council have completely ignored it.

The protest was initiated by the Chicago Alliance Against Racist and Political Repression (CAARPR) and included organizations such as  Black Lives Matter Movement, We Change Genocide, Fearless Leading by the Youth (F.L.Y.), and the Black Youth Project 100 (BYP 100). It began in Federal Plaza with the crowd listening to the stories of the family members of the many victims of police violence. They heard from relatives who spoke of the killing of Laquan McDonald, Ronald Johnson, Flint Farmer and many others. The CPD victims were from both the Black and Latino communities of the city. The sister of Herbito Gobinez who died in CPD custody in July demanded the release of the police video and a federal investigation of his death. The Gobinez family made this same demand last summer and were told “the investigation is ongoing and will take time.” The Gobinez case was just one more example of a victim of CPD violence who had been put off by the claim that the mayor-appointed “Independent” Police Review Board (IPRB) was taking its time to investigate the case. As we learned from the Laquan McDonald case, it took ongoing protests to make the IPRB take action.

The CAARPR and the survivors/victims of police crimes of murder and torture also delivered a letter/complaint to the U.S. Department of Justice (DOJ). This letter offered detailed, factual allegations made by over fifty signatories to the letter who were and are victims of police crimes and torture. The  survivor/victims also filed formal complaints individually in order to further demonstrate to the DOJ that there is a pattern and practice of racial discrimination when it comes to law enforcement in the City of Chicago.

With chants of “16 shots and a cover-up” the marchers continued through the Loop and onto City Hall. At one point, the marchers surrounded City Hall with a police tape that contained all the victims of CPD violence. There were, of course, chants for Mayor Rahm Emanuel and Cook County State’s Attorney Anita Alvarez to resign, but the main focus was “no peace, no justice, no racist police.”

CPAC has been written up in a draft ordinance for over a year. There was a protest in August with over 3,000 Chicagoans from the Black, Latino, Arab, Muslim, and many more communities demanding the implementation of CPAC even before the Laquan McDonald video was released and before the Department of Justice investigation into the CPD was announced.  That very clear demand last August was met by the city administration and city aldermen with a deafening silence. 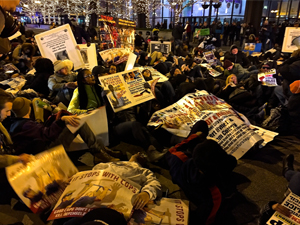 The CPAC resolution has the primary goal to make a systematic change in how Chicago’s communities are policed. The Council, consisting of elected community members from all of the police districts, would be empowered to hold police accountable for the crimes they commit, and to control and decide how Chicago communities are policed. And this is the control that the Mayor and the CPD does not want to give up.

Now the demand for community control of the police has been made once again. This is the one concrete change that can be accomplished by the City Council right now that will prevent CPD crimes from going on for months or years without any action. The DOJ investigation will likely take months like it did for Ferguson (six months) and Cleveland (21 months). People like Herbito Gobinez deserves justice now, not even more months from now.

In his speech to the City Council, Mayor Rahm Emanuel said

We are here today because Chicago is facing a defining moment on the issues of crime and policing, and the even larger issues of truth, justice and race…We can either be defined by what we have failed to do — or what we choose to do.

If the Mayor is serious about that, his administration can choose to introduce the CPAC resolution to the City Council tomorrow. Mayor – it’s already written down for you – just implement it.

Would the Chicago FAIR COPS Ordinance Make a Difference?