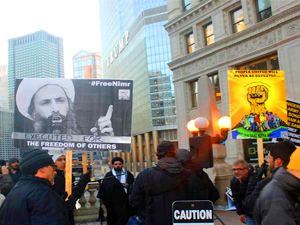 On Saturday, Chicago Muslims gathered in front of the Wrigley Building to join thousands around the world to demand the release of Sheikh Zakzaky in Nigeria and condemn the execution of Sheikh Nimr Baqir Al-Nimr in Saudi Arabia. Sheikh Zakzaky is the leader of the Islamic Movement of Nigeria and was captured in a Nigerian army raid on his home after hundreds were killed when the army attacked a peaceful march.  The protestors also joined other protests throughout the Middle East in criticizing the Saudi government for the execution of the prominent Shia cleric Sheikh Nimr al-Nimr as a “terror suspect.”

On Dec. 12, 2015 the Nigerian military killed more than an estimated 1,000 members of the Islamic Movement of Nigeria and attacked their leader Sheikh Ibrahim Zakzaky. The Nigerian army claimed the raid was in response to Islamic Movement members attacking the convoy of the Chief of Army staff, Tukur Buratai. Many were killed after soldiers opened fire on members of the group, who they said put up barricades and blocked the road to be used by the Army chief. The group said Zakzaky’s wife, Zeenat, was killed, but the military said she and Zakzaky were in protective custody. The group released the following statement

Considering the gross violation of fundamental human rights and extra-judicial killings perpetrated by the Nigerian Army, the Islamic Movement hereby condemns these unjustifiable acts…We state categorically that the claim by the Army that Members of the Movement attempted to assassinate the Chief of Army Staff [COAS] was a blatant lie as the army came back to launch their attack more than an hour after the COAS had passed…Clearly, the Nigerian government through its military is now on rampage, in an all out war with the Islamic movement, its members and structures…Therefore, with all pointers at the government as the contractor of the killings, we hereby call on well meaning Nigerians and the international community to intervene and seek redress for the victims and their family members as many innocent people have unjustifiably been killed and many others severely injured.

After the attack, the whereabouts of Sheikh Zakzaky is unknown. Three of Mr. Zakzaky’s sons had been killed in a

similar attack by the Nigerian Army in July 2014. The Islamic Movement of Nigeria is a non-violent, majority Shia group and has a history of being attacked by both Boko Haram and the Nigerian military. The daughter of Sheikh Zakzaky, Nusaibah Ibraheem El Zakzaky, released a statement that echoes a theme throughout these protests, i.e. the attack on the Islamic Movement is not just an attack on the Shia, but an example of oppression by the Nigerian government.

Shia Muslim, I am just a Muslim, and NOTHING comes before the name Muslim…The Islamic movement’s main agenda was to fight the injustice of the system that we are forced to live under in this country. Anyone from anywhere including non-Muslims are welcome to join our struggle…When my
three brothers were killed last year, they were demonstrating in solidarity with the Palestinian people (most of whom gravitate towards the Sunni school of thought). They weren’t killed because they happen to follow the Shia school of thought, they were killed because they were fighting for the oppressed, The authority figures in Nigeria felt threatened by that because they are oppressors themselves, otherwise why would a peaceful protest drive you to shoot unarmed people and let them bleed to death for hours…This is not a Shia massacre, this was a massacre period. And everyone in the world should be outraged by it, including non-Muslims and especially Nigerians. If your government or people sworn to protect you, like the army can kill you for a petty reason like a road blockade, and even release a video that in their mind can justify the death of hundreds if not thousands of people, what else do you think they can kill you for? If you don’t speak against this, someday this will happen to you and then who will speak for you?

Speakers at the protest condemned the attacks by the Nigerian military and the killings of hundreds of the group’s members. Masooma Haider pointedly described the lack of media coverage over the massacre of the Islamic Movement members in December.

It is estimated that more than one thousand people died. Sheikh Zakzaky lost three of his sons. Why is he paying the price? He is a man who fought for peace and democracy, for loving Christians and Muslims in his country…This is a government we support. Where is the news coverage of this massacre? The media and world powers have demonstrated that black lives and brown lives don’t matter. Because when there is any incident in those countries, they don’t report it…We will stand here in America and will be their voice. We will fight for justice and against oppression.

Protestors asked for pressure to be put on the Nigerian government for the release of Sheikh Ibrahim Zakzaky and his wife, Zeenat.

While preparations for the Chicago protest of the attack on the Islamic Movement of Nigeria and Sheikh Ibrahim Zakzaky, the Saudi government executed 47 people who they accused of “terrorism” related offenses. Included in that number was opposition cleric Sheikh Nimr Baqir Al-Nimr. Last October, a Saudi court  sentenced the Shia cleric to death, having been found guilty of seeking “foreign meddling” in the kingdom, “disobeying” its rulers and taking up arms against the security forces. Sheikh Nimr Baqir Al-Nimr supported mass anti-government protests held in the Eastern Province in 2011 after the start of the pro-democracy uprising in neighboring Bahrain, which was put down by Saudi-led forces. The US State Department and UN secretary-general Ban Ki-moon expressed “dismay” over the execution and said it would heighten sectarian tensions in the Middle East. Amnesty International’s Middle East and North Africa Director, Philip Luther said that Nimr had been “executed to settle political scores” and that his trial was both politicized and “grossly unfair, because the international standards for fair trial were grossly flouted…What is going on is an attempt to silence criticism of Saudi Arabia, particularly among the Shiite activist community.”

Along with Chicago, protests of the execution were held in Bauchi Nigeria, Tehran, Bahrain, London, Toronto and many other cities around the world.

At the Chicago protest, a close relative of  Sheikh Nimr Baqir Al-Nimr, Mustafa Al Nimr, spoke to emphasize that the Sheikh fought for the rights of all people.

He is a scholar, he is a man of religion and dedicated his life to religion, to God, and to his people. He is a humble man, a poor man. He claimed the rights for his people, for all the oppressed people, not just the Shia. He claimed the rights for the Sunni, Shia, Christians, for anybody…He never spoke of violence. H was a peaceful man…His famous quote was “The roar of the words will defeat the sound of the bullet.”

Mustafa Al Nimr reiterated an important point that was mentioned by other speakers as well. The Nigerian military that killed members of the Islamic movement and the Saudi government who executed Sheikh Nimr Baqir Al-Nimr want to make the issue one of sectarianism – a conflict between Shia and Sunni. But the core issue in both cases is a refusal to recognize the rights of minorities in both countries.

When we speak of terrorism, no one hears us. We are Muslims and Americans. We are against any sort of terrorism whoever is doing it…Sheikh Nimr Baqir Al-Nimr was a champion of freedom and peace. He was the voice of oppressed people, of those victims of terrorism. But the media is still silent.

The speakers were united in their demand for people to contact the Nigerian, Saudi, British, and U.S. governments to demand the release of Sheikh Ibrahim Zakzaky and to demand justice for Sheikh Nimr Baqir Al-Nimr.

Demystifying the Rise of Boko Haram in Northern Nigeria