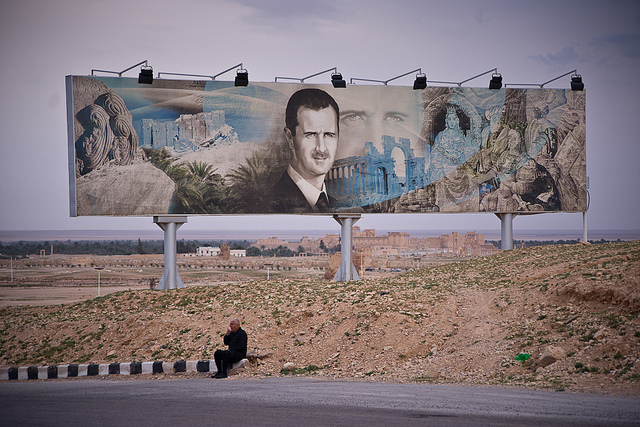 Over the course of the last week mounting pressure from Syrian activists, humanitarian aid agencies, and international organizations has successfully focused the world’s attention onto the besieged Syrian town of Madaya northwest of Damascus. Horrific images of starving and dying children in the town have become a symbol of the Syrian regime’s brutality as well as the failure of the international community to address a civil war that has become the worst humanitarian crisis of the post-Cold War era.
Starting in late November, harrowing images began to emerge from Madaya, a rebel-controlled town in the Anti-Lebanon Mountains near the border with Lebanon, depicting a humanitarian situation there that was only getting worse. According to the most up-to-date reports, up to 42,000 people have been trapped in the town, ringed by minefields, barbed wire, and snipers since fall of 2015. This was when what was officially called a “ceasefire’” was reached between forces loyal to the al-Assad regime and the rebels. The militias besieging Madaya are in fact mostly foreign; the militarily-weak Syrian government is being bolstered by Hezbollah fighters from Lebanon as well as Iranian-backed forces, both of whom support al-Assad’s cause to reach their own political ends in Syria.

While reporting on Madaya has been difficult, video evidence released by activists shows horribly emaciated children and toddlers, accompanied by reports that residents have resorted to eating grass and cats for survival and that people were dying everyday. One video shows a boy named Mohammad Issa saying that it had been seven days since he had last had a meal.

This desperate reality of life in the town was confirmed by United Nations Humanitarian Coordinator in Syria Yacoub el-Hillo who visited Madaya Monday night. “It was at times difficult to determine if what we were seeing was in fact fabricated or exaggerated,” he told reporters. “It is not. It is not. I am sad to say it is not. These are true stories coming out of Madaya.” Before this week, the last shipment of aid and food had arrived on October 18th.

Following pressure from the UN and US Secretary of State John Kerry, food and aid provided by the Red Crescent was finally allowed to enter the town on Monday, January 11th, as was agreed upon in a deal reached with the government forces, much to the relief of Madaya’s residents. While this aid was desperately needed, it will only last a month or so, and people will likely continue to die without access to hospitals.

However, Madaya is not a stand-alone case. Amnesty International estimates that up to 200,000 people are living under siege conditions throughout Syria, with roughly half of these being imposed by the Syrian regime, and the other half by ISIS. Increasingly, it appears that the welfare of the people of Syria has been used by multiple sides as a bargaining chip – the Syrian government only allowed humanitarian aid to enter Madaya and another besieged rebel town nearby, Zabadani, after being given assurances that two Shi’a towns in Idlib province that are loyal to the regime will be given similar relief.

These four towns, Madaya, Zabadani, and the two Shi’a towns of Kfraya and Foua, were part of a ceasefire agreement reached in September 2015, wherein civilians from the Shi’a towns would be evacuated, and 500 rebel fighters loyal to the Islamist militia Ahrar al-Sham would be allowed to leave Zabadani. Thus, what resulted was a situation where regime forces were allowed to maintain their military positions in the four towns, while rebel fighters from the southern areas near Damascus were evacuated northward to join the fight in Idlib. The civilians in Zabadani and Madaya were effectively abandoned, leaving them at the mercy of the regime, Hezbollah, and Iranian forces.

Now that this coalition of armies has exclusive control over the fate of people in these towns, they are using the deadly humanitarian situation to leverage their influence over diplomatic developments at the UN. In a cynical strategy, by playing on international desires to alleviate the suffering of Madaya’s people, forces loyal to al-Assad are able to extract political concessions from their opponents by dangling humanitarian access to place like Madaya in exchange for political demands. In this way, the ceasefires that John Kerry sees as crucial to an eventual Syrian peace process end up giving the Syrian regime an upper hand in negotiations, and allow it to hold its own people hostage.

The calculating actions of the Syrian regime stand in stark contrast to the place it is being given in international negotiations, with John Kerry openly acquiescing to Russian demands that the al-Assad regime be included in a post-conflict resolution. The United States, in seeking a quick resolution to the conflict aimed at defeating ISIS at all costs, has ignored the terror inflicted upon Syria’s people by al-Assad’s government. Because ISIS poses a threat to security in the West and has expanded its reach in the face of America’s War on Terror, the UN, John Kerry, and others have seemingly prioritized the fight against ISIS over the fight that started the war in the first place: against al-Assad.

It is then no surprise that ordinary Syrians feel betrayed – the biggest murderer of civilians in Syria is increasingly being seen as a legitimate negotiating partner. Thus if Western diplomats believe that an outcome that includes al-Assad in a position of power will endure given the crimes he has committed against his people, they are severely deluded.