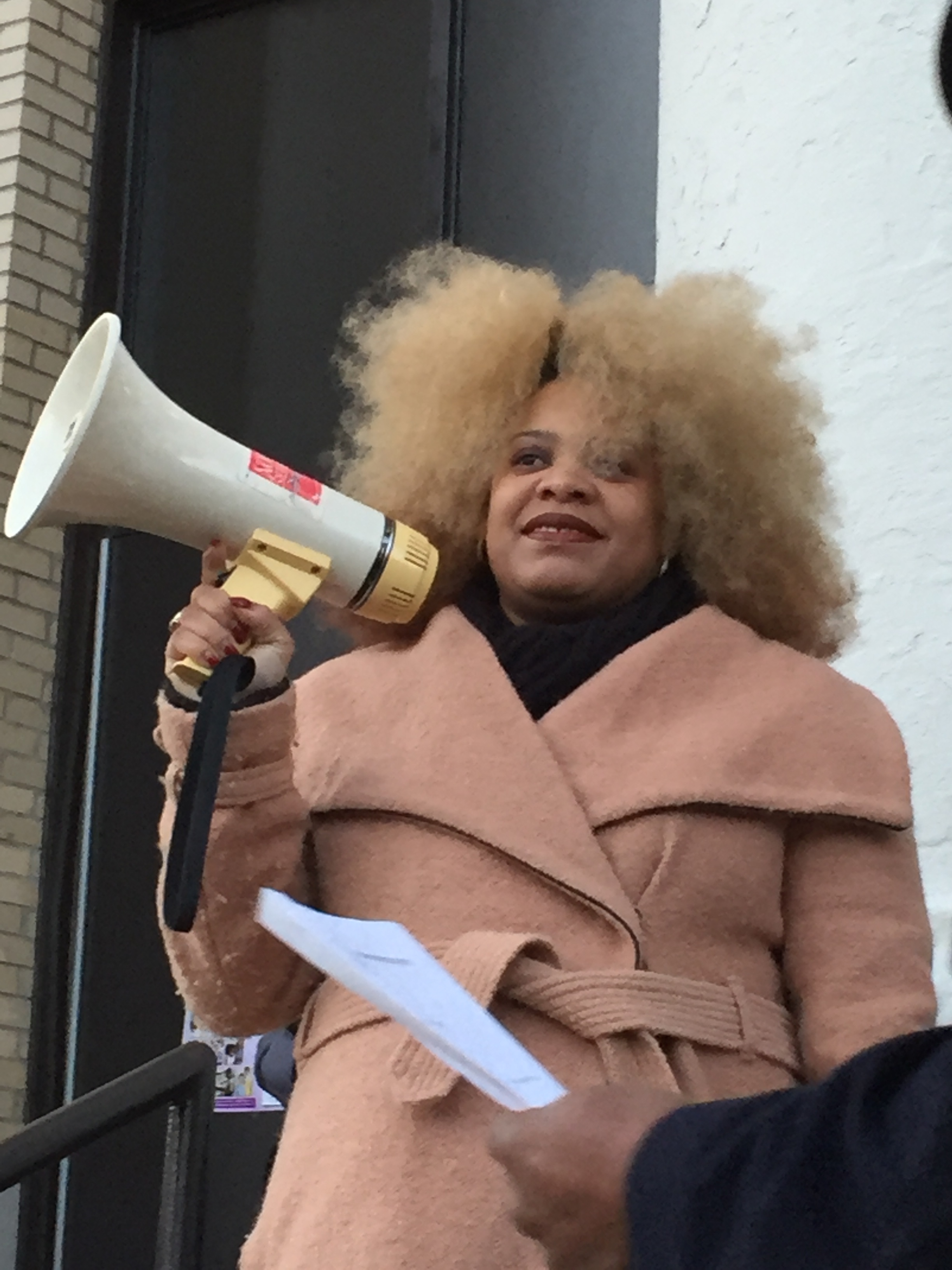 Without Little Village community input, Mayor Rahm Emanuel’s appointed CPS School Board has developed a plan to co-locate John Spry Community High School with Saucedo Academy and Telpochcalli Elementary School. As many of the communities have come to expect, CPS only asks for community advice after they have made up their minds about a plan they developed themselves. Yesterday at Saucedo Academy, the public CPS meeting was met with a rally, press conference, and blistering complaints from parents, students, and teachers from the community.

About 200 parents, students, teachers, and local school council members attended a rally in front of Saucedo Academy to oppose the CPS co-location plan. Multiple speakers questioned a plan that had been proposed without community input affecting the three main community schools – all having excellent ratings, high enrollment, attendance, and retention of students.

Zerlina Smith, a Saucedo parent and former aldermanic candidate, led off the rally with chants of “They say cut back, we say fight back!” She challenged the CPS focus on disrupting the Little Village community – “How do you spell racist? We say CPS!” She reminded the crowd that the CPS Board who is making these decisions for the community are all appointed by Mayor Rahm Emanuel and this decision is one more example of his not listening to the communities of Chicago.

“Rahm Emanuel could have come here with his hand-picked board and sat down and spoke with all  the parents and all the teachers before they made this decision…We want to make sure our resources stay the same…Our children deserve better…We going to let this mayor know that he already under a lot of fire. We just don’t ask for him to resign. We want him to come to this building and resign here. Because Rahm Emanuel has had his term way too long representing black and brown people. He does not serve us….He does not represent the black and brown communities.”

One of the parents, Cristina Lopez, demanded that Alderman Cardenas support a community-developed proposal and said that these schools deserve their own buildings.

Local School Council (LSC) member and parent Eric Linn stressed the importance of CPS going to the community first for input especially in the current environment of extreme lack of trust in CPS decision-making.

“We strongly oppose this co-location because it was done without our input. By CPSs own space utilization formula these schools are efficient. They don’t take into account the rooms we parents want – the rooms for libraries, music, special ed classes, and counseling..What is the plan when they need more space in our schools? A school is more than square footage…It is an eco-system built on trust and stability that can be shaken by these top-down decisions…We demand true community input at CPS. They have lost the confidence of the entire city. The first step to gaining it back is to include students, teachers, and families into decisions that impact them.”

John Tillman, a teacher and parent, continued to emphasize the lack of trust in CPS statistics that have proven to be faulty in the past.

“CPS cannot be trusted they can’t even properly calculate graduation rates; they can’t properly calculate floor space as they give out deals to Aramark. They cost jobs and moneys. Now we are supposed to trust them and their efficiency numbers in terms of utilization?  We don’t trust CPS.”

One of the most powerful speeches was by Jesus “Chuy” Garcia, Cook County Commissioner and former candidate for mayor. He spoke of the hard work by the entire community to make Saucedo Academy and Telpochcalli Elementary School into the successes they are today.

“If Maria Saucedo were alive, she would be here saying we won’t tolerate anything the community doesn’t want. It took a lot of work from students, parents, teachers, administrators, support staff to make this a level one school. Why should anyone dictate from up above that they want to co-locate another school on this campus? Telpochcalli School is one of the best-recognized small schools in Chicago because they involve parents. We have two stellar successful schools that value children, that involve parents…I am here to engage in defending what our communities have built over the years that is successful public education of our future leaders at Saucedo and Telpochcalli campus…When you announce and don’t engage, when you appoint and don’t involve and ask people if it is a good idea that’s a dictatorship. Chicago doesn’t want a dictatorship anymore…Chicago last year in a referendum citywide voted 90% that they want an elected school board. This is what happens when you don’t have an elected school board. You make decisions from the top down and don’t engage and respect communities…Our community will be respected!”

Jonathan Jackson from RainbowPUSH Coalition continued with another important theme, i.e. the finances of CPS that are affecting students and the involvement of the Mayor in the school system’s financial crisis.

“You deserve better than this. They [CPS Board] continue to have board meetings, board actions and make decisions that defy the will of the people. There were 50 schools closed two years ago. They specifically said there would be no schools co-locating. Once again they lied…In 2016, we are seeing the demise of our public school system. The CPS system is bankrupt already. Next month they will be announcing our school system is a half billion dollars in the red. Our children did not make this school system go bankrupt. We will not sacrifice our children’s future. We are disgusted with the Mayor’s tone deafness and belligerent attitude. We are here to stand up, fight back on behalf of our students and our children.”

Sarah Chambers, a Special Education teacher at Saucedo, summed up the issues with the co-location plan, stressing the Mayor’s ability to find money for banks but not for schools, and the community’s past and future resistance to decisions made without its input.

“First Rahm tried to stabilize our schools by cutting special ed. Now he’s trying to stabilize our schools with this co-location. We may lose special ed classrooms, our library, cuts in resources, our class sizes will skyrocket. Yesterday he tried to get the City Council to fund $200 million in toxic interest swaps to banks, but he says he has no money for our schools. Rahm is choosing his banker buddies over our students and our children. The rent for Spry High School is only $90,000 but he has $200 million dollars for his bankers. He can renegotiate these swaps and bring money back to our schools…The old members know that Saucedo and Little Village are not to be messed with. Saucedo has had a boycott; Little Village has had a hunger strike for their schools. If you do not vote no, if you do not accept the community-developed proposal, we will escalate and have more actions.”

After the rally and press conference, more than 500 members of the community attended the CPS hearing on the co-location plan. As was explained at the CPS meeting held at Saucedo for the community, John Spry Community School pre-K through 11th grades is located at 2400 S. Marshall Blvd. and during the school day the high school grades 9 through 11 are located at the Boys and Girls Club at 2950 W. 25th Street. CPS proposes relocating Spry’s 9th grade to the Saucedo building and 10th and 11th grades to the main Spry building. CPS staff made a number of claims that the high school students would be segregated in their own floor of the Saucedo building, use a different entrance, and would have no impact on the Telpochcalli Elementary School (which is located in one wing of the Saucedo building). CPS has projected this move will save $90,000 in costs. But the promises of “no impact on Saucedo Academy and Telpochcalli” were met with multiple challenges by the community.

Parents, teachers, and students complained that the community was only offered this one plan and that shared areas of the schools, like the gym, library, and cafeteria will require high school and elementary students to mix. A Special Education teacher at Telpochcalli described how she doesn’t have enough spaces to meet with her students even now and that the unique bi-lingual nature of the school program was not even discussed in the CPS plan.

The very few people who spoke in favor of the CPS co-location proposal included Alderman Cardenas who emphasized the community needed to unite over this proposal and a principal at another elementary school in the area who described the inclusion of high schools students potentially being helpful to her elementary students.

One of the teachers from Spry questioned what would happen to the safety, the independence of the administration and even the future of the school with this plan. By the end of the session, multiple community members were demanding a community developed proposal and that they would occupy the school itself to press their demands.

Given the majority of the speakers at the meeting, it was quite clear the Little Village community was far from being supportive of the CPS proposal. There will be additional community meetings on January 20 and January 27. The co-location proposal will be voted on at the CPS Board meeting on February 24.