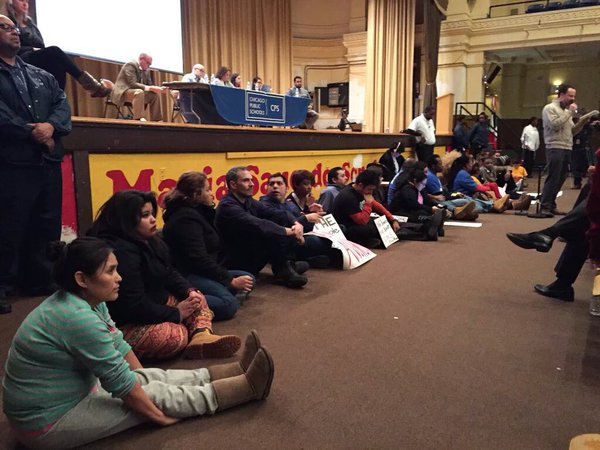 The Chicago Public Schools (CPS) emailed a cryptic press statement on Tuesday evening stating “CPS has postponed the proposed Saucedo/Spry colocation at the request of the community. We will hold regular meetings with stakeholders to seek more input.” The statement was released to the press and not the families and teachers in the community who have been fighting against the CPS proposal to co-locate Spry High School with Saucedo and Telpochcalli Elementary Schools. After the last CPS sponsored “community input” meeting held at Saucedo Academy last week, parents occupied the building until their demands for a community proposal were met. So the CPS announcement that the co-location proposal had been postponed was a great victory for the activism of the community. But is CPS really able to “seek more input” from the community?  The CPS press release sent on Tuesday was in English –  Little Village is a majority Latino community.

Parents, students and staff from Saucedo, Telpochcalli, and Spry schools gathered on Wednesday morning at the entrance to Saucedo and Telpochcalli to

“Keep the pressure on Chicago Public Schools to cease the attacks on our school communities. CPS might have backed off their co-location proposal temporarily, but we need to remain united and vigilant to get the resources that our students and schools deserve. Stakeholders at the 4 impacted schools have begun to lay the foundation for the creation of a ‘Marshall Square Education Plan’; an inclusive and collaborative process between parents, students, school staff, community members, CPS and elected officials, to create an alternative plan that provides support, stability and resources for Community Links, Saucedo, Spry and Telpochcalli schools to thrive.” 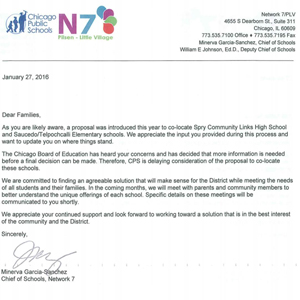 Eperanza Emiliano, Little Village parent and Telpochcalli Community Education Project (TCEP) leader spoke to the press stating that the community is requesting a formal written statement from CPS that says the co-location proposal has been postponed and that they will approve a plan that is developed by the community stakeholders. CPS did release a written statement to the families on Wednesday in English and Spanish that only says they are

“Delaying consideration of the proposal to collocate these schools. We are committed to finding an agreeable solution that will make sense for the District while meeting the needs of all students and their families. In the coming months, we will meet with parents and community members to better understand the unique offerings of each school.”

Pointedly, CPS does not commit to giving up the proposal to co-locate the schools and only offers to have more meetings over some undetermined length of time “to better understand the unique offerings of each school.” This letter does not meet the demand for a community-developed proposal. It appears that CPS was not able to force through a poorly thought out co-location plan because of the strong opposition and have postponed the plan to placate the community with more meetings. CPS was clearly rushing the co-location plan as community members pointed out the spaces shared between elementary and high school students like the gym, library and cafeteria had not even been discussed. Sarah Chambers, a Saucedo Special Education teacher who reviewed the co-location proposal floor plans, pointed out only four special ed rooms were identified when the school needs seven. In addition, there was only one boys and one girls bathroom for all of fifth through eighth grade – over 500 students. CPS not only didn’t include community input, but also developed a badly flawed plan to begin with. 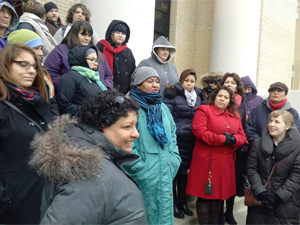 Many of those who spoke at the rally emphasized that all the schools were doing well as they were and co-locating them would only disrupt the highly rated learning environment and create space problems in the Saucedo and Telpochcalli building. One Saucedo student reflected the students’ fear that their positive environment would end when he said in tears, “I have great teachers…I am learning math, reading…teachers are great here.” Ashley Reyes, a parent and teacher at Saucedo, spoke for many after she heard the co-location proposal was postponed.

“Our school will stay the wonderful learning environment like our community deserves…I am proud to have my second grader taught by such a strong dedicated staff, which freely gives of their time and energy to fight for the community.”

Diana Zurawski, another Saucedo teacher, emphasized the importance of the students, parents, teachers, and the community being united in making their voices heard.

“I am proud to work at a school with such engaged parents, staff, community, and students. I am especially proud of those students at the community meetings taking their first opportunity to speak publicly and make their voices heard about what is happening at THEIR school. This victory shows what can happen when we are all united for a common goal. Their co-location was short sighted and did not involve community input. I am confident that working with stakeholders at all three schools a more viable solution will be created. Thanks to everyone who made their voices heard.”

After the rally in front of Saucedo and Telpochcalli schools, the students, teachers, and parents walked into school as the CPS security guards made sure the parents did not linger. Later that morning, the CPS Board of Education held their monthly meeting. The Little Village Schools co-location proposal was only briefly on the agenda. Dr. Janice Jackson, Chief Education Officer, repeated the main points that were written in the email press statement.

When a parent speaker demanded a written statement, with a version in Spanish, that explains what CPS means by “monthly meetings with the community” and that it needed to be a community-driven process, the only response from the Board was that they “agreed with the community demands…and had met with the alderman.” The fact that CPS had “met with the alderman” – meaning Alderman Cardinas – was far from reassuring.  At the first CPS community meeting held two weeks ago, one of the very few people who spoke in favor of the CPS co-location proposal was Alderman Cardenas who emphasized the community needed to unite over this proposal.

Fanny Diego Alvarez from Enlace Chicago, a Little Village social services organization, emphasized that CPS needs to be sure to continue to fund Spry High School and respect the community process. That the Board should not be looking for solutions for co-location, but looking for solutions for all of the community’s schools. Zerlina Smith, a Saucedo parent and former aldermanic candidate said, “We want to stop the co-location plan. All three schools deserve to have their own education.” 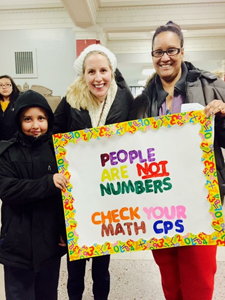 The original impetus for the co-location proposal was to save the $90,000 that Spry High School is paying to lease space at the local Boys and Girls Club. Many community members have questioned whether all the disruption to three successful schools that the co-location proposal would bring was worth $90,000 in savings at a time when the CPS deficit is close to $1 billion.

The remainder of the CPS Board meeting was a further illustration of this point as multiple speakers including Alderman Carlos Ramirez-Rosa and Michael Brunson, Recording Secretary of the Chicago Teachers Union, emphasized the availability of  $1.386 billion in Tax Increment Financing (TIF) funds that could be used to support the public schools. Legislation pending in Springfield proposes moving at least $300 million in TIF funds to CPS to help with the deficit. Ramirez-Rosa also discussed the tens of millions of dollars in bank fees charged to the City of Chicago that should be negotiated and challenged by the Board. Brunson added the option of  taking legal action against the banks for toxic interest swaps they sold to the city that have been challenged by other large cities including Houston and Philadelphia. “We should consider closing CPS accounts at banks that refuse to renegotiate these toxic interest swap deals.”

During the meeting, the Board was being sharply challenged for its poor financial planning and management. At one point, members of the public did a “mike check” that involved multiple people repeating statements like “Protect students, Not bankers,” “Protect students, not developers,” “The Board of Education threatens 5,000 layoffs, but won’t lift a finger to get money from the banks or the TIFs,” “CPS has paid over $500 million to banks ripping off our schools with toxic swap deals,” “TIF funds have hundreds of millions of unused money saved for the mayor’s slush fund when CPS needs it now,” and “Who does this unelected board answer to? Who does this handpicked board represent?”

Just as the Little Village community is demanding a community-driven process to determine the best way forward for all their schools, many other communities in Chicago are looking a responsive, elected Board of Education that represents the interests of every Chicago community.

From the rushed, poorly conceived co-location proposal to the vague plan released for more “meetings” with the community, it is clear that CPS is not ready to provide control of the Little Village public schools to the community. But it is also clear that the students, parents, teachers, staff and community members of Little Village will continue to organize and resist any proposal developed by the mayor’s handpicked school board.