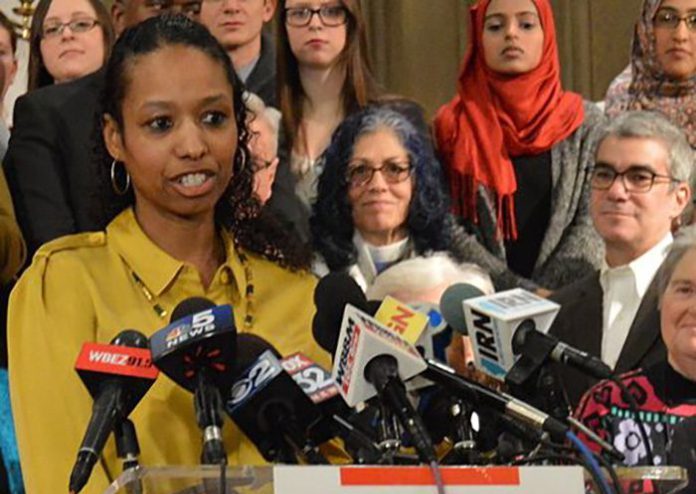 Professor Larycia Hawkins is being punished for standing in solidarity with Muslims during a time where Islamophobia remains a reality amongst other countless, discriminatory realities Americans continue to face, even as we have entered a new year in the 21st century. Professor Hawkins’ actions have been recently challenged by Wheaton College, an evangelical Christian school in a Chicago suburb, where she holds the position of a tenured associate professor of political science.

Wheaton College has begun the termination process for Larycia Hawkins after having suspended her last month after she decided to wear a headscarf during the Advent season, a celebration of the nativity of Jesus at Christmas. It was an act of finding unity among different faiths by stressing similarities such as the head covering worn by the Virgin Mary, who is believed to the mother of Jesus by both Muslims and Christians. The administration of Wheaton College has a problem with Professor Hawkins possibly violating the Statement of Faith she signed as a requirement of all staff members of Wheaton College. A Facebook post was also published by Professor Larycia Hawkins stating “I stand in religious solidarity with Muslims because they, like me, a Christian, are people of the book… And as Pope Francis stated … we worship the same God.” The post revealed her solidarity with Muslims during a time where they are being attacked by possible future leaders of the United States of America such as Donald Trump.

Wheaton College has not only not supported Professor Hawkins in her freedom to express her solidarity with the Muslim community, they also decided to begin the process of terminating Professor Hawkins from the university by holding an administrative hearing scheduled for February 11. Her name may have disappeared from the headlines, but we must continue to support her and pressure Wheaton College to keep her job.
The same way Chicagoans are coming together to demand justice for Laquan McDonald is the same way community organizations need to come together and show their support for Professor Hawkins, which many already have. Over and over again, the system that has been put in place has proven to work against the common people. In order for change and reform to be effective, it must come from the people. As a strong, Muslim woman, I do thank and very much respect Professor Hawkins for her supportive action, but we need to also stand up for every person that is discriminated against, whether based on their religion, gender, or race. Professor Hawkins started a conversation, but there are so many others that need to be started in these areas of injustice. Like Professor Hawkins, my focus in education is political science and so I understand that there are various topics that arise in a political science focused class. If she limited in this instance, I wonder how limited she is with what she can and cannot teach or what is being covered and what is not being covered in her political science classes.

The action carried out by Professor Hawkins was inspiring. As a young, educated Palestinian-American, Muslim woman who chooses to wear a headscarf, her action has given me hope and it re-instills my faith in humanity during a time of rising Islamophobia in the West. However, like many other Muslims, I do not seek anyone’s approval of the choices I rightfully make nor am I seeking anyone’s pity. Nonetheless, it is very refreshing to see an action done in solidarity with Muslims that has proven to be louder than any words that have been spoken during a time of rising Islamophobia in the West. Moreover, having met the very kind and humble Larycia Hawkins, I do not believe she is asking for Muslims to thank her, even though many of us do appreciate her action along with having a great amount of respect for her. Rather, I think she is trying to spread awareness without any fear of the reactions of others. That takes courage. She has done something that I rarely come across. Professor Hawkins is a symbol of genuineness. Next time I am in public, and I notice the stares and glares I am given at work, school, the mall, the movies, or the airport, I will think of Professor Hawkins and her tolerance as a person that has faith like myself. She is just as accepting of other faiths as I have been taught to do within the faith I practice.