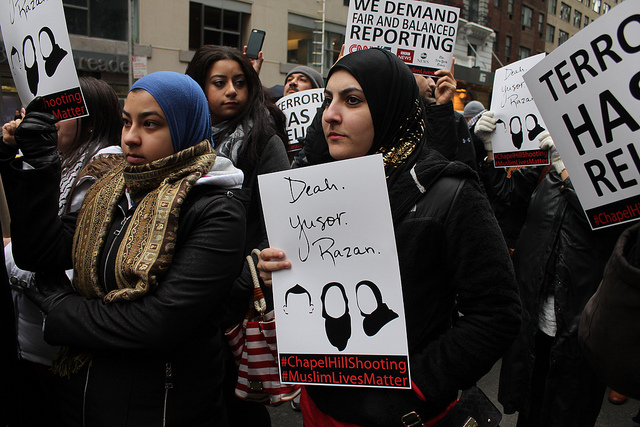 Facebook
Twitter
Pinterest
WhatsApp
Email
Print
One year ago today, on a frigid evening in Chapel Hill, we lost Our Three Winners Deah, Yusor and Razan. In spite of that cold-hearted act, their memory lives on, warming our hearts as a memento of hope and optimism much needed after the nation’s worst year of mainstream Islamophobia.

We’re fortunate to be able to remember them with their beaming smiles and shining faces in that now-iconic photo. In mourning their loss, friends and family remarked that it was Deah’s up-beat attitude, and his affinity for pranks and hugs that left its mark even on the not so hug-inclined. What else could you except from a dentistry student leaning towards pediatrics? Deah had launched a Refugee Smiles campaign months earlier—raising money to travel and bring dental care to Syrian refugee students in Turkey. That video, and the trip he was never able to make, now serve as stark reminders of a selfless and motivated individual that wanted to bring smiles to the kids that needed it most, but was prevented from doing so.

And who can forget Yusor’s ecstatic grin, just after nailing a half court shot? It’s a telling scene, just one small snippet of joy between many she shared with Deah, family and friends. Small, happy thoughts, and big smiles – all things they once shared with each other, sought to share with those who needed them, and now share with us. In the spring prior, Yusor had volunteered at a dental clinic in Kilis, Turkey. Her acts of kindness, like her gleaming smile on the basketball court, serve as stark reminders of beautiful but fleeting moments. It’s no wonder the accomplished individual and aspiring Dental student, prevented from fulfilling her dreams, is still bringing bright smiles to us today.

Then there is Razan, forever memorialized in that now-iconic photo of Our Three Winners, donning her cap, gown, and hijab. A trailblazer, she was looking forward to a career in architecture, something her grammar school principal said was a daring choice in a community that puts primacy on careers in medicine and engineering. She won a campus design competition her first year at N.C. State, and had big things ahead of her. The day of the tragic events, she was planning on training for a half marathon and made a last minute decision to visit her sister. Marathon or not, however, Razan came out a winner in all of our eyes.

These are blissful memories. They represent compassion and humility, joyfulness and aspiration, achievements and a bright future. And they stand in stark contrast to the cruelty, and bigotry, that relegated them to thoughts in the first place. It’s dispassion, as well, that has only served as seawater for a rising wave of hatred and bigotry that is at its height. We are in 2016, and in the year since last February Islamophobia and xenophobia have plagued our national life.

It took hours for national media outlets to pick up on the Chapel Hill shootings, and in the weeks that followed – in fact, until now – some still claim that the shooter’s motivation was a parking dispute. As if that is some sort of redeeming defense, it continues to show how some still deny the very existence of Islamophobia. In turn, that only contributes to its perpetuation. After all, the first step to resolving our problem is admitting we have one.

And it’s becoming increasingly difficult to deny the rabid hate and bigotry crippling our nation. This year has been the worst on record for hate crimes perpetrated against Muslims since 9/11.  Last May, my Muslim Chaplain at Northwestern University faced discrimination in the skies as a passenger on that now-notorious United Airlines flight. In September, Ben Carson said that the President of the United states cant be Muslim. Following the November Paris attacks, Jeb Bush took the ISIS bait and said that our nation should only admit Christian refugees from Syria. Our own Illinois governor was one of the many across the nation who, in turn, opted to put a halt on the resettlement of Syrian refugees in the state.

In December, Donald Trump took the crown, enthusiastically reading his own press release: “Donald J. Trump is calling for a total and complete shutdown of Muslims entering the United States until our country’s representatives can figure out what is going on.”  With 63 recorded attacks on mosques this year, and 17 in November alone, we can only wonder where we’re headed next.

This has been an exhausting year for the US – not just for Muslims, but for minorities and immigrants of all stripes.  In the midst of all the animosity, prejudice, and narrow-mindedness, it’s the reminders of our humanitarian, empathetic, and driven Three Winners that helps us stay motivated for the struggle still ahead.