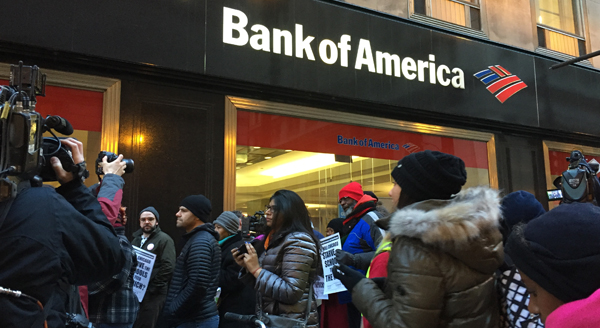 More than three thousand teachers, staff, parents, students, and their supporters marched in Chicago yesterday for a fair contract for the Chicago Teachers Union (CTU). The protest was in response to the threat of $100 million in cuts by CPS the day before. The protest centered on the Bank of America office on LaSalle Street to highlight the CTU demand for CPS to renegotiate toxic interest swap agreements with the bank. The day before members of the CTU visited the bank and withdrew $726 million of union funds deposited there. While protestors circled the building, sixteen union members sat down in the bank lobby and chanted. All were arrested and charged with misdemeanor trespassing and detained for six hours at CPD District One headquarters. One local media station suggested “The union is trying to broaden its contract argument by going after the banks, not just CPS” but then don’t explain why the CTU is “going after the banks.” At the very end of the Chicago Tribune coverage it said “At one point Thursday, demonstrators staged a sit-in at the Bank of America building to protest financial deals engineered by CPS administrators” without any further explanation. It’s the approach of the local media to suggest that this is just another union going after bankers. So why did CTU do a sit-in at the Bank of America?

In a CTU press release yesterday, the union explained its rational for the march and the sit-in of the Bank of America office.

“The march came two days after Mayor Rahm Emanuel’s handpicked Chicago Public Schools (CPS) CEO Forrest Claypool declared war on public school educators by threatening $100 million in classroom cuts—roughly 1,000 layoffs—and just one day after the CTU withdrew nearly $1 million from Bank of America [BOA]. The CTU closed its BOA savings account in protest of that bank and other financial institutions that sold CPS toxic interest rate swaps, and are demanding a payout of at least $228 million—almost the exact same amount as cuts enacted by the Chicago Board of Education to schools and special education.”

In response to the CTU’s rejection of the CPS proposed contract that would have insured continued instability for the Chicago Public School system and to the CTU’s concrete recommendations to improve CPS financials, CPS immediately ignored the recommendations and called for the elimination of up to 2200 positions – teachers and support staff – as well as cuts in funding used for anti-poverty and special education programs. What were the concrete recommendations President Karen Lewis and other union officers called for? For the mayor to put the surplus TIF funds into the public schools (Tax Increment Financing (TIF) is a special funding tool used by the City of Chicago to promote public and private investment across the city); support the TIF funds bill for public schools in Springfield; and renegotiate the toxic interest swap deals with the banks that are costing the district millions of dollars. So in response to the CTU recommendations which are realistic enough to have legislators in Springfield introducing a bill to use the surplus TIF funds for CPS and other cities having renegotiated their toxic interest swap deals (like Los Angeles in 2010, Oakland, Philadelphia and Boston), CPS responds with threats to teachers, support staff, poor and special education students.

What are toxic interest swaps?

Mother Jones magazine explains them in this way

“Well, they’re contracts that allow, say, Baltimore to enter into a deal with Bank of America to pay for public infrastructure projects. In that deal, Baltimore and BofA will “swap” interest rates with each other: the city will pay the bank a fixed rate—3 to 5 percent, say—to borrow money, and the bank will in return pay the city cash based on a floating, variable interest rate. (This is determined by some underlying source, like the LIBOR rate for short-term lending.) The point of a swap deal is that, when the economy was booming, cities could borrow from banks on the cheap, because their fixed payment rate was on par with or better than the bank’s floating rate. But after the economy tanked, and the LIBOR rate dropped with it, banks emerged as the winners: Their variable payment rates to cities are now basement-low because overall interest rates are low. Cities, however, are still stuck with those higher fixed rates. Essentially they’re getting fleeced. And banks want to keep it that way. To do so, they’ve imposed steep termination fees to get out of an interest rate swap.”

According to a report from ReFund America Project, Chicago has paid or authorized $296 million in termination penalties, on top of a half-billion dollars in swap payments through 2015. Curtis Black in The Chicago Reporter stated “In 2012 Baltimore filed a class action lawsuit against JPMorgan, Citigroup, Bank of America, and others charging that their artificial manipulation of LIBOR – a benchmark interest rate that was used in many of Chicago’s swaps – robbed their clients of millions of dollars in returns on investments such as interest rate swaps. In 2013, Philadelphia filed a similar suit. The banks being sued by Baltimore and Philadelphia include those that sold big swaps to Chicago and Illinois.”

Before the march and bank sit-in, the CTU did reach out to Bank of America for a meeting to discuss these toxic interest swaps. The union officers provided a letter to the bank at the time when they were closing the account. “Officers of the Chicago Teachers Union” delivered the following letter to Mr. Paul Lambert, Chicago Market President that read in part:

from our schools through toxic “interest rate swap” deals. Banks sold toxic swaps to CPS on the premise that they would reduce borrowing costs for the district. As Bank of America is well aware, the opposite has been true. Big banks have now taken over $502 million from Chicago Public Schools through these predatory deals, more money than the CPS budget shortfall claimed by Mayor Emanuel and CEO Claypool…While cities across the country have filed lawsuits to win back toxic swap money, the cozy relationship that LaSalle Street banks enjoy with Mayor Emanuel and his handpicked Board of Education has shielded them from responsibility for these fraudulent deals. The Mayor is threatening mass layoffs in our schools, further cuts to special education, and slashing educators’ pay, but he has refused to ask for one cent of sacrifice from the wealthy banks that profited from toxic swaps.”

There has been no response from Bank of America executives or from Mayor Emanuel or CPS CEO Forrest Claypool. Sarah Chambers, a special education teacher, and one of those arrested during the sit-in commented

When it’s gotten to the point where teachers are occupying banks to make their voices heard, don’t you think it’s time for an elected school board?

By not explaining the CTU focus on Bank of America and the refusal of the Mayor appointed CPS Board to renegotiate the toxic interest swaps with the banks, the local news media are only obfuscating Mayor Emanuel’s financial mismanagement of CPS and the city as a whole.  Given the millions of dollars that Chicago banks have made on toxic interest swaps deals with CPS and the TIF funds that Mayor Emanuel continues to spend on new luxury high-rise developments like the project announced last month, it is not hard to understand why the CTU uses the hashtag #BrokeOnPurpose to describe the financing of Chicago public schools.