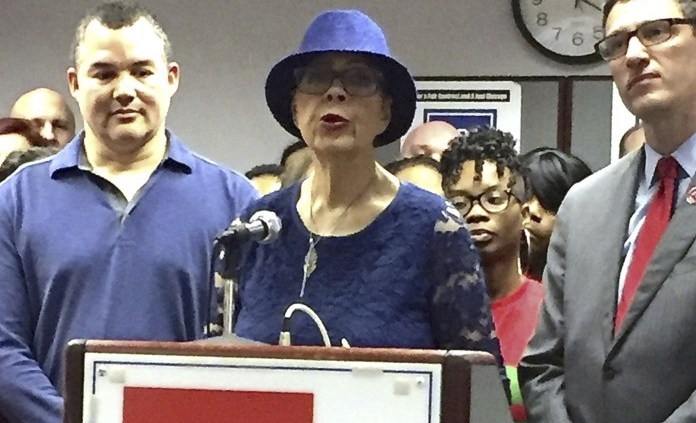 Yesterday, the forty member CTU contract negotiating team unanimously rejected a CPS contract offer proposed that would have added not only more fiscal instability to Chicago’s public school system, but also to the classroom environment of the students.

Although much of the local media likes to focus on the Chicago Teachers Union (CTU) President Karen Lewis, it is important to remember that it was the CTU bargaining team made up of union members from every role in the public schools including elementary and high school teachers, spec ed teachers, counselors, teaching assistants, paraprofessionals, case workers, and nurses who resoundedly rejected this latest contract offer. At the press conference, many spoke about their own reasons for how the offer would not only impact members but also their students. A lot of the press coverage emphasized the funding issues with the proposed contract, but the biggest problem the bargaining team raised was the negative impact on students and on the entire public school system.

An important component of the proposal that was not emphasized enough at the press conference was that CPS based a large portion of their savings on 1500 teachers and 700 teaching assistants and paraprofessionals agreeing to take early retirement. If that did not happen, CPS reserved the option of opening up the contract completely again for negotiations during the summer. In addition, none of these positions or anyone who left voluntarily or quit would be refilled. This portion of the offer becomes a threat – either retire from CPS or quit and if that doesn’t happen, CPS will follow through on its drastic reductions in staff. There is no mandated limit on class sizes so the classes could mushroom to 40 or more students without adequate teachers aids. For special ed students, this would be a particular problem. In addition, many of the teaching assistants are people from the neighborhood that provide that direct support and connection to the community.

Bargaining team members, like special education teacher Jim Cavallero, spoke about how much pressure this would put on veteran teachers to retire, but would “especially hurt our most vulnerable students – special ed” who would see the loss of teachers aids. He continued, “This is an attack on neighborhood schools and the needs of special ed students.” LaShawn Wallace Burks, a teaching assistant and CTU Executive Board member, also spoke of the potential increased class size and the important role teaching assistants play in the classroom. Victor Ochao, a guidance counselor, talked about the heavy caseload of the counselors and the lack of trust in CPS to make sure that every school has adequate counselors for its students.

“We unanimously reject the Board of Education’s offer…They are still choosing corporate interests over the interests of our students…We don’t trust they will make it good. They could release TIF funds, but refuse to do so…The Board is only interested in cuts and the only money mentioned is that from teachers…This fight is about the soul of public education.”

Karen Lewis stressed that this proposal will bring no short or long term financial stability to the public school system.

“Simply signing a contract with CPS will not bring them a windfall of resources from the state…We have to exhaust every option available that includes terminating those [toxic interest] swap deals, returning the TIFs to the schools and a financial transaction tax that could bring hundreds of millions of dollars to the city. Without some real movement on the revenue problems we can’t trust that they will honor any words offered in a four-year contract deal.”

CTU estimates that there is somewhere between $150 and $350 million in TIF surplus funds that could be used to help fill the CPS deficit. These are the same funds that Democrats in Springfield have included in a bill to do exactly that. Karen Lewis also discussed the lack of trust in CPS being connected to the union’s experience after the last contract when language concerning principal bullying and reduced paperwork were ignored as well as larger issues of continued charter school expansion and the closing of 50 public schools. The more charter schools are opened, fewer students go to public schools, and the less funding those public schools get.

When she was asked what was the most egregious aspect of the contract offer, she said that there was no guarantee of funding and that the only extra funding came from the pockets of the teachers. What was needed for CPS to gain back the trust of the CTU?

“First, have the mayor put the TIF funds into the public schools. Second, support the TIF funds bill in Springfield. Third, reform the Illinois Charter Commission.”

The Illinois Charter Commission can force any school district in the state to open charter schools against the wishes of the district. This is especially a concern for the CTU as Secretary of Education Arnie Duncan, before he left office, pushed through a grant of $249 million to the charter school industry. This was done at a time when an audit by his department’s inspector general found “that the agency has done a poor job of overseeing federal dollars sent to charter schools.” The contract offer language that stopped charter school expansion by CPS has no meaning as the state Charter Commission could easily overrule that language and use the Department of Education grant to open as many charter schools as possible. Given that Governor Rauner is on record as being a charter school advocate, this scenario is not far fetched. As Karen Lewis noted, “Charter schools were sold as education on the cheap. The only thing cheap is what they pay their staff.”

The CTU’s press release noted that

“The CPS bond sale went south last week because investors are skittish about the real financial challenges the district faces. The downgrades came after investors’ concerns about the city’s inability to raise revenue.”

There are certainly questions about how Mayor Rahm Emanuel’s administration has managed the city’s finances that even the financial rating agencies are frowning upon. As the CPS Board of Education is handpicked by the Mayor, the CPS financial management buck also lands squarely on the Mayor’s desk. As CTU Vice President Jesse Sharkey noted

“CPS has been living on borrowing for too long. Now to turn around and blame teachers and staff for that debt while letting bankers off the hook is not acceptable.”

The CTU plans on continuing to negotiate. There will now be 75 days of fact-finding, a proposal by an already chosen mediator, 30 day cooling off period to make a decision on the proposal. If the proposal is rejected by one or both sides, then the earliest the CTU could strike would be sometime in May.

It was very clear that this four-year offer was a band aid that called for all sacrifices in money, positions, and benefits to, once again, come from the pockets of Chicago public school teachers and staff. As Karen Lewis said “There was no guarantee of continued funding for the public schools.” This contract offer was a recipe for continued instability for the public school system, for all the teachers and staff, for the neighborhoods, and most importantly for the students themselves.