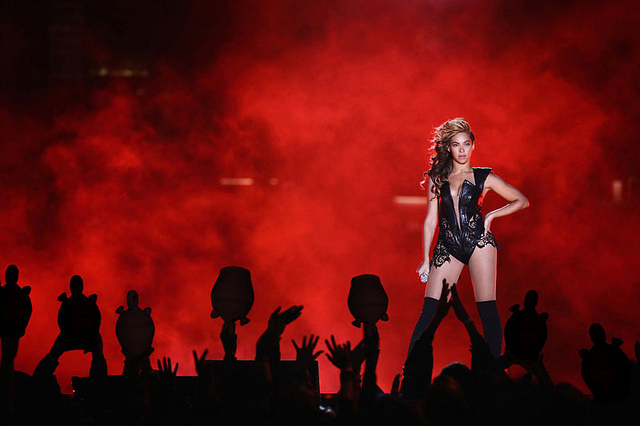 Facebook
Twitter
Pinterest
WhatsApp
Email
Print
Beyoncé’s performance during the Pepsi Super Bowl 50 halftime show at Levi’s Stadium has created controversy across the nation. Critics, viewers, and even some fans argue that her show was equivalent to race baiting and not a reflection of creativity but instead a clear political message against white supremacy and a statement that echoes solidarity with the Black Lives Matter Movement. Many were so incensed that an Anti-Beyoncé protest is taking place today in front of the National Football League’s Headquarters.

According to critics wearing all black with black berets and afros are strong indicators that Beyoncé is pro-militant when it comes to self-defense similar to the theoretical foundation of the Black Panther Party and therefore, anti-white. Not to mention, she released her new single (the same one she performed) just a day before the Super Bowl called “Formation,” – a song that expresses her southern-creole background and reveals emotions towards police-involved violence.

However, it’s unquestionable that Beyoncé is known for her capacity to empower all people especially black women. She is indeed a symbol of black culture. So is it possible that accusations have gone too far? Or that her intentions are really to promote equality?

Many argue the rhetoric of the Black Lives Matter Movement and whether or not their strategies have a positive impression on the African American community as well as non-black populations. Yet despite the few radicals chanting, “We want dead cops,” the reason that the organizers used the “Black Lives Matter” title was not because they were suggesting other lives are of lesser value, but because they are signifying a specific problem that is happening in the African American community that cannot be found in other communities. The same reason Beyoncé did not perform at the most watched event in hopes of perpetuating the great battle of races or to overthrow white domination but to salute the past and present efforts made by the black community – to denounce violence, injustice, and systematic hardship.

Contrary to popular belief, the Black Lives Matter Movement sheds light on deeply rooted socioeconomic issues that have plagued blacks throughout American history. It is a movement that encourages impartiality, stresses recognition of the corruption within our justice system, and demands police reform. It reveals institutionalized racism and works hard to alleviate prejudice and misconceptions against the black community. Furthermore, it addresses a set of circumstances that blacks are more likely to face than any other race.

Statistics presented by the NAACP show that African Americans constitute nearly 1 million of the total 2.3 million Americans incarcerated even though blacks only make up 13% of the general population; blacks are six times more likely to be imprisoned than whites. To put that in further context, one in three black men will be incarcerated at some point during their lifetime. Currently, blacks represent 26% of juvenile arrests, 44% of youth who are detained, 46% of the youth who are judicially sent to criminal court, and 58% of the youth admitted to state prisons.

In regards to drug use, about 14 million whites and 2.6 million African Americans report using an illicit drug. Therefore, whites are five times more likely to use drugs compared to blacks, yet African Americans are sent to prison for drug offenses at ten times the rate of whites. Not to mention, according to The Sentencing Project, an organization that conducts research and advocates for reform, discovered that blacks serve virtually as much time in prison for a drug offense (58.7 months) as whites do for a violent offense (61.7 months).

Astonishing statistics such as these have many contributing factors. Inner city crime prompted by social and economic isolation is a key influence to black disadvantages. Policies such as “Get tough on Crime” and the “War on Drugs” have direct impact on the vulnerable, poor and socially excluded. It glorifies the confiscation of drugs off the streets and portrays criminalization of drug users, but ignores the root causes of drug addiction, which fall back to little opportunity, neglect, isolation, unemployment, and lack of education.

In 2007, approximately 16% of all elementary and secondary public school students, nearly 8 million in total, attended high-poverty schools. Greater percentages of African American (33%) and Latino (34%) students attended high-poverty schools than whites (4%). Statistically, African American high school dropout rates are significantly higher than any other race. Why? Of all racial groups, black students are most likely to have access to a school that does not offer advanced placement courses or schools that are classified as “low AP,” making the student achievement gap widen.

Blacks have consistently lived below regular standards and this has been prevalent throughout American history.

Wealth inequality is growing significantly between blacks and whites. Data from Pew Center Research indicates that in 2013 the median net worth of a black household was $11,000 while the white median net worth was nearly thirteen times greater at $141,900. This may be fundamental when transitioning to college as it is well known that race and family wealth are highly correlated making blacks less likely to graduate college with a graduation rate of 41% compared to whites at 63%.

So is the Black Lives Matter Movement a radical, barbaric, and overstated group crying victimization? Is Beyoncé advocating rebellion and lifting a historical Band-Aid by placing unneeded emphasis on racial prejudice while going overboard with black affirmation? Or is it simply evident that the lives of African Americans are systematically and intentionally targeted for injustice?

America may be a great nation embodied with diversity but it is undeniable that we are a country that has been founded upon intolerance. Therefore, when a deaf ear is wrongfully given to any person regardless of race, especially when it involves their right to equal life, expect upheaval. After all, we live in a climate that does not change unless drastic measures are taken and although chanting death upon those who are meant to protect is ineffective, we must listen to the underlying message: if blacks don’t find themselves behind steel bars, they remain imprisoned by societal and governmental oppression.

How many times must this be said? As a nation, we must not ignore the hues of our skin as they serve a reminder of our differences, but we must respect those distinctions with impartiality.