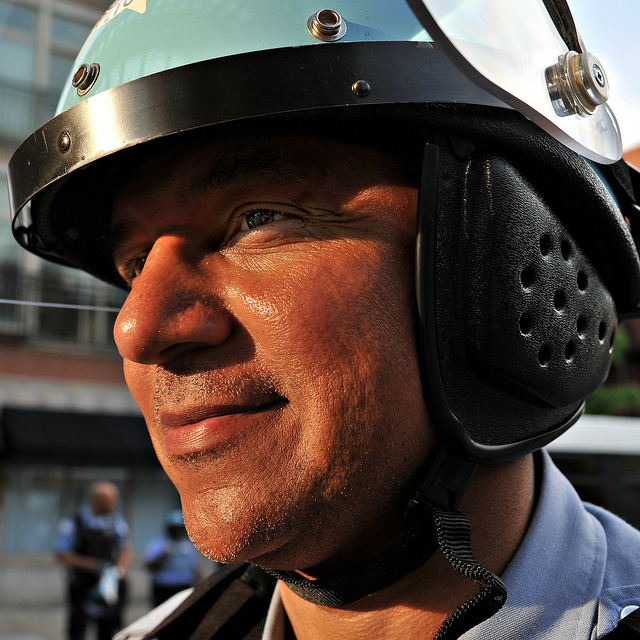 During a winter marked by painful revelations of violence at the hands of the Chicago Police Department (CPD), Chicago’s Community Renewal Society has finally found the momentum to push its FAIR COPS Ordinance (FAIR COPS). As a representative of the Chicago Alliance Against Racist and Political Repression, an organization dedicated to stopping police crimes and impunity, I have been hesitant to come out forcefully against CRS’s proposal. Unfortunately, FAIR COPS, if enacted, would do far worse than merely “nothing.” It would draw valuable momentum away from of the movement in which it claims a part, and would further complicate the bureaucratic superstructure into which complaints about the CPD already disappear with dubious ease.

So, just what would FAIR COPS do? At CRS’s January 18th event in support of the ordinance, the audience was urged to demand an independent prosecutor, and subpoena power. These supporters would be well served by a cursory reading of the FAIR COPS draft on CRS’s website. They will find no independent prosecutor, and an almost farcical interpretation of subpoena power. In short, Fair Cops adds another office and appointed position to the ever-growing constellation of independent review and oversight bodies that hover around the CPD. This time, the public’s salvation is to be found in an Auditor, a contractor-appointed, city council-approved officer of government, who would serve a five-year term. The subpoenas that the auditor could serve would only require appearances at the auditor’s own office, and no matter how deeply the auditor might investigate an officer or a complaint, he or she would have no power to hold any officer accountable. The auditor would be unable to carry out or even suggest an officer’s indictment or firing.

The auditor’s power is limited to extremely feeble oversight of the Independent Police Review Authority (IPRA) and the CPD’s Internal Affairs (IA) division. Its concrete powers are: the ability to require IPRA to revise a recommendation for discipline, and the ability to require IPRA or IA to change the classification of a complaint type within their own offices’ systems, or to continue to look into a complaint identified by the auditor. That is all. Fair Cops would create another source of recommendations that never manage to reach their destinations. No matter how IPRA might carry out the revisions suggested by the auditor’s office, the Police Board would still have exactly the same final say it has had a monopoly upon since before IPRA’s creation. At this point, Chicagoans need more than required revisions to non-binding recommendations when it comes to police misconduct.

We have seen this all before. IPRA itself was supposed to solve this very problem, to be the independent review authority that would have no reason to brush complaints under the rug. Yet, eight years and 400 officer-related-shootings later, IPRA has only found two of those shootings to be suspicious, and in those cases only under consistent protest. For all its independence, IPRA has ended up being a stable for law enforcement professionals, a fate that would likely befall this auditor’s office as well. Fair Cops would leave intact all those review bodies that have failed, and add another layer to their dysfunction.

What Chicago needs is community control of the police through an elected Civilian Police Accountability Council (CPAC). This would create a dynamic and democratic process that would not allow the investigation of wrongdoing by Chicago Police to disappear forever behind closed doors. Residents of communities that experience police violence routinely know that calls for more oversight, community policing, better training, DOJ task forces, and independent review are all euphemisms for the same old structure that has repeatedly failed.  IPRA and the Police Board must be done away with entirely, and replaced with an all-elected all-civilian police accountability council, or CPAC. No more “Oversight”, no phony “Review Boards”, no “Auditor”, only community control, only CPAC!

Gerrit Hatcher is a member of the Chicago Alliance Against Racist and Political Repression (CAARPR).