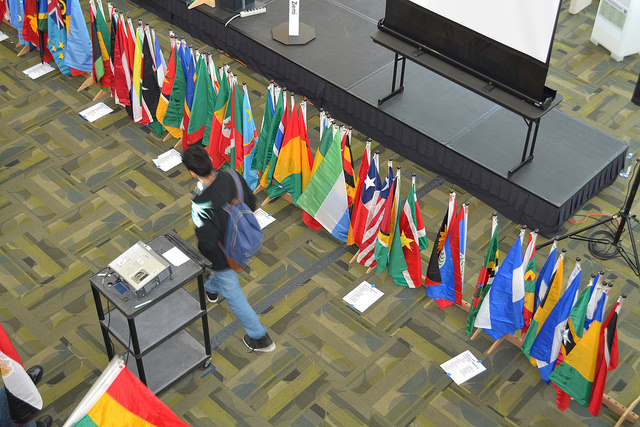 Facebook
Twitter
Pinterest
WhatsApp
Email
Print
In 2015, the world saw a year fueled by activism. From the University of Missouri protests against racism to protests against the treatment of Syrian refugees in Europe, the world saw activism doing what it does by definition: bringing awareness to social and political issues. Right here in Chicago, activists helped bring national attention to the shooting of Laquan McDonald, a teenager who was shot by police last summer. The protests staged by activists eventually led to law enforcement taking a closer look at the case. The beginning of 2016 has already shown signs of being another big year for activism in Chicago. On February 9, Chicago State University students protested over school’s lack of financing. The next day students protested at Wheaton College over Professor Hawkins who was leaving the school because of controversy surrounding her comments on Islam.

Students have acted as catalysts to the activism process. At community colleges, where a wide variety of types of students get an education, there is a potential for an even bigger impact. Due to the more direct access of these colleges to their communities, the political and social change at a community college tends to ripple far beyond the borders of the school.

David Goldberg is a political science professor at the College of DuPage (COD), a community college in Chicago’s western suburbs. Goldberg sees student activism every day from advising student clubs to answering questions about political issues in class.

“I think students are really engaged.” Goldberg said. “From watching TV or social media, [students] might have a thought on Trump, Sanders, or ISIS.”

Goldberg advises several clubs at COD that help with student involvement. He advises the school’s Model U.N club as well as Engage, a new club that aims to get students more politically involved.

According to Goldberg, the biggest problem community colleges have with student activism, is maintaining momentum. Since community colleges are traditionally two-year schools, there is a high turnover rate of students who transfer to other colleges or go back to work.

“When students leave, you have to start from scratch again,” Goldberg said. “You can have really great students, who organize others and know exactly what they want, but those students usually have ambition to go elsewhere,”

However, Goldberg said this does not seem to impede the work that is done at community colleges. He expects, specifically, in the next few months with elections coming up, community colleges will see an even bigger push of student activism. He also mentioned that after a school shooting or a major Supreme Court ruling, that he also sees an increased interest in activism, “even it’s emotionally rather than policy oriented.”

Regardless of what issues or politics students want to advocate for, Goldberg is just happy that students are trying to understand the world around them.

“I’m pleasantly surprised that students are engaged and want to talk and be active participants in the political process,” Goldberg said, “ I mean that is part of our goals [as professors].”

While Goldberg admits that there is lots of activism occurring at community colleges, he also is quick to mention that being an all commuter campus affects student’s ability to participate. He is not alone in his sentiments, Devin Chambers, a transition coordinator at Harper College, a community college in Chicago’s suburbs, thinks that at a community college, there is less student activism.

“I don’t believe this is because the student body is uninterested, rather due to the nature of the suburban college that draws commuter students from a wide range of areas,” Chambers said.

But there are examples of student engagement on a daily basis at community colleges like COD from participating in a student government election to tabling for clubs such as the African American Student Alliance, Muslim Student Association or Turning Point USA.

But there are examples of student engagement on a daily basis at community colleges like COD from participating in a student government election to tabling for clubs such as the African American Student Alliance, Muslim Student Association or Turning Point USA.

Joe Enders is a student at COD and a member of Turning Point USA, a conservative activism organization that has chapters throughout the country. Enders has seen first-hand how student activism at a community college can cause change. In September 2015, Enders gained media attention after a video was posted to YouTube of a COD police officer telling him and his fellow Turning Point USA members that they could not pass out fliers on campus went viral. Enders and his supporters felt that COD was violating the U.S Constitution’s First Amendment free speech rights. According to Enders, COD has now suspended the policy that did not allow him to pass out fliers and is investigating into how to make more amends. For Enders, this cemented the power of student activism.

While Enders sees the positive side of student activism at community colleges, Chambers has a very different view.

“In the suburban campuses at the College of DuPage and Harper, we see little in the way of activism,” Chambers said.

Chambers feels that it is the community college’s’ student body, often which stem from all ages and incomes and live off-campus, which affects students availability to protest or take a stand on issues.

Nevertheless, there are still people like Enders and Goldberg that are not unique to COD. Across the country, there are countless professors discussing political issues with students and students who decide to take a stand on those issues and protest. And, just like Enders and Goldberg, these professors and students are bringing change to their communities.