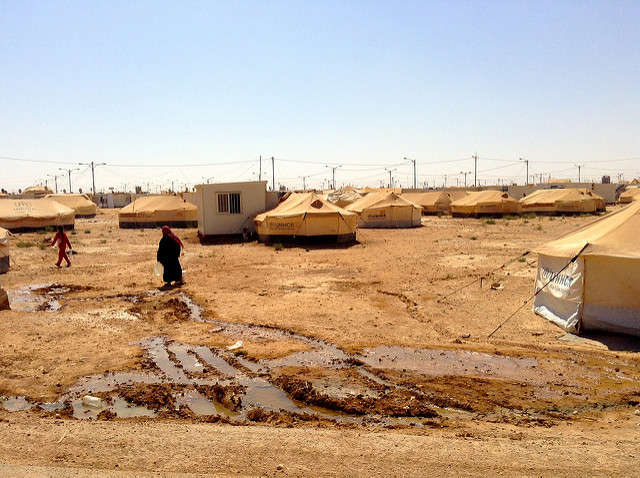 Bombs fall from the sky on the Syrian town of Daraa. A mother loses a son, a little girl loses her brother, and a child loses an untold future. The hopeful faces of those who marched in the massive demonstrations are now plagued with anguish, because for them home no longer exists. Their cities have been gutted, their work places demolished, and their sanctity diminished. On videos we can see the dismembered bodies of children and city dwellers and they make our stomachs turn, but what we miss outside the camera frame are their stories. We do not know them as the merchant, the engineer, or the doctor. Those who witnessed the death of their co-workers and classmates now cross dangerous waters and flee to bordering countries not only to escape one of the worst humanitarian crises of our time, but to run away from the horrors they have witnessed with their own eyes.

In early January a team of doctors and students participated in a humanitarian and medical mission through the Syrian American Medical Society (SAMS) to offer specialized medical care and winter weather preparation counseling. Students worked gathering photos and videos to depict the reality behind the inhabitants living conditions and collecting data to increase the efficiency of future missions. Along the way stories of struggle, defeat, and violence told by patients and other camp residents were gathered with the goal of representing to the world the conflict that has followed displaced Syrians across the globe. As one of those students, I expected the refugees to be grateful and appreciative of our work; I was wrong. To protect those mentioned, their names and exact ages will not be used.

“What brought you to the camp?” we asked the mid-aged woman who walked over four hours to see Nimra Sarfaraz, the attending nephrologist, “The bombings, the fear.” she responds. Her husband passed away before the Syrian uprising, and she is in the camp with her two sons and all her grandkids. Much like the others we interviewed, when we asked if there were any difficulties they faced living in the camp she responded, “Thank God we have safety, it is a blessing. We are all well, thank God.” Having heard this answer many times in the day’s prior, we were skeptical of its validity. We decided to follow up asking if there were any difficulties while they were in Syria, to which she responds, “There was nothing difficult.”

After about 6 days of seeing patients and conducting interviews, we identified a common pattern of people circling around the

questions we would ask, telling us they need nothing, have everything, and are thankful for what they have been given. We first attributed this to their culture, where accepting handouts diminishes pride and being grateful for what little you have is the response. But the last day we asked a doctor that lives and works in the SAMS clinic. The reality was that the people we interviewed were fearful that their district leaders, Syrian regime sympathizers, or the Jordanian authorities would hear their complaints and either relocate or remove them from the camp. Our Western perceptions stuck with us, we blindly connected what we didn’t understand to the foreign culture and completely missed what was going on right in front of our eyes.

“Did you ever consider going to Germany or Greece?” we asked the women, “No, I never thought about it.”
“Are you planning on returning to Syria?” we asked, “If God wills.”

The answer to our question was in front of our eyes the entire time we were working; the widely varied sizes of the shacks, the different quality of the homes, the same kids outside the clinic every morning telling the doctors a fake distance of how long they traveled to get there. We became skeptical of everything, what is real and what is not? Did we really help or did we do more harm than good?

Going back over the video interviews, we saw the fear in the people’s eyes we had previously missed, we noticed their short, quick, and similar answers to every question. We decided to put them aside, not trying to relay the wrong message that these people were forced to convey. During the remaining time of our last day at Zaatari we tried to correct our perspective, and genuinely communicate with patients less like reporters and more like friends. But just as we began our path toward redeeming ourselves, we heard the screams of a women shouting at the receptionist. Stepping outside to make sure nothing is wrong, I was hounded by an unfamiliar woman with two infants, all three of them crying.

“I’m looking for the lady with the camera!” she cried, getting more emotional seeing the confused look on my face. Before I had time to figure out whether we interviewed her or not she began explaining that she told her husband about an interview she did with us, and he threatened her for doing it, forcing her to return and beg for us to delete the video. After promising her that the video will be deleted and never used, we were still unsure if we had even interviewed her before.

After finding and watching it, we realized why of all the people we interviewed she was the one to come back fearful. Before completing her request, we took down some of her quotes.

“Everything is difficult. My children are sick, we have no food.”

“I have a boy and a girl [their ages] going to school, but my [child’s age] old had to quit and work as a delivery boy on a bicycle, sometimes getting half a dinar and sometimes nothing.”

“My husband has been looking for work for three years.”

“Syria is gone. It is impossible to live there. My parents and brothers wouldn’t leave and I haven’t heard from them since I came in the camp.”

“We are all grateful to God for what little we have, but we all have very little.”

Upon my return to the states I was skeptical as to whether our former contact at the clinic was simply making assumptions. I

was still unsettled by the contradiction between all our interviews and the one outlier. Nimra and I remained in contact discussing what we thought to be a conspiracy theory until we finally decided it might not be so far fetched. We got in contact with an NGO worker on the ground in Zaatari who was also a Syrian refugee. When we asked whether our speculations were valid he said, “Unfortunately yes that is true. The camp officers can decrease your food and water, or they can move your family to another bad location in the camp.” He went on explaining multiple stories of people being kicked out of the camps by Jordanian authorities and being forced to return to Syria. However he asked me not to share them out of fear they will be recognized and punished.

This verification only raised more questions: could this be why the camp’s population decreased by almost a half since its opening? What are they trying to hide?

“The decrease is because of the life in the camps. The refugees used to say ‘it is a slow death.’” our source told us, “The Jordanian government is trying to say ‘we are doing our best to keep the refugees in their best shape, but we need more money to do that.’ The reality is they are doing nothing.”

He concluded saying, “We as Syrian refugees have many threats all the time and for simple mistakes. That’s why all of us are dreaming to resettle in Canada or the U.S.”

It was not until knowing the truth behind what we saw that the stories of those began to haunt my mind. We heard the people’s stories, and we thought we were comforting them with our presence and willingness to help. But now we ask: did we really help during our mission? We may have been able to save lives, but did we improve them? We treated superficial cuts and bruises, but can we treat their shattered dreams and broken hearts?

We thank God,
and if God wills Syria will be fine,
and we can return to our homeland.

When I asked Nimra for her thoughts on what we had uncovered, she wrote back discussing her “before” and “after” mentality. “Going into the area I had acquainted myself with the logistics and the enormity of what was going on a few short miles north in Syria.” She said, “In my mind, there was definitely a schism between what was being reported by verified organizations such as the Syrian Arab Red Crescent, SAMS, Amnesty International and the United Nations, and what the people sitting in front of me were saying. The level of chaos and violence experienced by these people is so prevalent that it has become the norm. This is the reality, not the glowing picture conveyed from a rosy-cheeked beautiful smiling child.”Reflecting on my own experience, I am grateful for having done this work. But as grateful as they were for our work, it’s evident that we, just like the people inside camps, are circling around the answers to the bigger questions. Despite a successful medical mission, I hesitate to call it ‘humanitarian’ – i.e. ‘concerned with or seeking to promote human welfare.’ The emotional distress and pressure on people being persistently ignored by the world undermines the “humanitarian” nature of these misssions. I still question the outcome of our work. I pray the women who told us the truth about her circumstances does not face repercussions for opening our eyes and our hearts, and I hope a time will come where the people of Syria will be able share their stories as fading memories of what used to be.

Omar Alzein is an undergraduate student at Benedictine University studying health science. With a career in medicine, Alzein hopes to participate in the new medical care systems of reforming Middle Eastern nations, improving safety regulations and preventing substance abuse. He is originally from Homs, Syria and has been personally impacted by the ongoing civil war and humanitarian crisis.