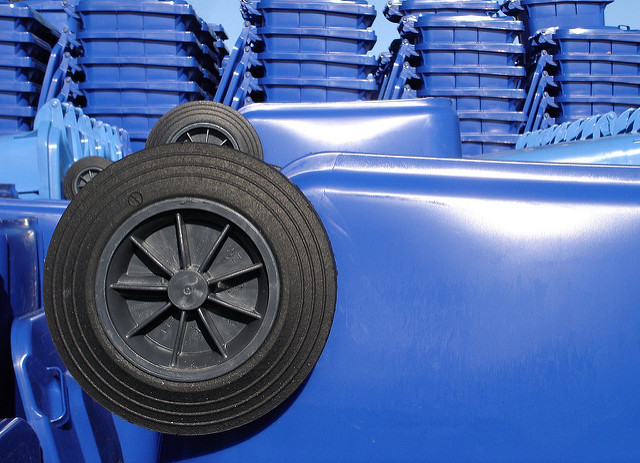 Facebook
Twitter
Pinterest
WhatsApp
Email
Print
In 2013, Chicago Mayor Rahm Emanuel expanded the city’s Blue Cart Residential Recycling Program. The city of Chicago website says that if you recycle regularly, “you can reduce the need for landfills, lower disposal costs, reduce pollution and conserve natural resources.” At the very beginning of the recycling program, residents bagged their recyclables and placed them in their Blue Carts. Now, Chicago’s Streets and Sanitation have new rules about how recycling in Chicago is going to go from now on.The City of Chicago uses what is called, “single stream recycling.” This means that all recyclables are collected and mixed together in the collection truck, rather than being sorted by material type. The recycling is then sorted at a processing center. The city keeps track of the success of the recycling program and you can view the landfill diversion rates of Blue cart areas here.

As reported on DNAinfo Chicago on November 19, 2015, Streets and San are requiring residents who recycle to put all their recyclables in the cart loosely.

“Recyclables contained in any bags (paper bags included) will no longer be accepted,” according to Streets and Sanitation Commissioner Charles Williams. “Everyone wants to do their part to help protect the environment, but when you put the wrong items in the blue cart — like a plastic bag — you contaminate not only your cart but a whole stream of otherwise useful materials.” The argument is that plastic bags damage equipment and hinder workers as they cannot see whether non-recyclable items have been placed in the cart.

In an effort to make the rules easier to follow, the city launched a website – www.recyclebycity/Chicago/guide. City residents however, are not thrilled with the new and burdensome restrictions, such as the new rule of removing a jar’s lid before recycling it. These are leaving many to question why they bother recycling at all. Chicago resident, Joanna Gwozdek said, “I liked it before, but now I don’t and because of these new restrictions we don’t recycle anymore. I know neighbors who don’t recycle anymore. My can was tagged twice. Once with an orange sticker, and once with a green sticker. I felt unprepared and surprised, no media outlet reported the changes coming to the program, and if they did, they only brought it up once. I would recycle again if we could go back to using the bags. It was all working fine until the new rules. She continued,  “Honestly, I don’t feel like having to put the stuff in there loose and one thing at a time. When they told us we could only recycle certain things, we stopped using the bin”.

At the beginning of 2016, Streets and Sanitation began enforcing their “bagless” rule. The local news media however, neglected to announce these changes, leaving many Chicago residents confused and enraged when they saw their recycling was not picked up and that their Blue cart had the infamous ‘orange sticker of shame’ labeling it “contaminated.” DNAinfo Chicago reports that Streets and Sanitation Director Chris Sauve anticipated a large amount of resident backlash and admitted that the city was still trying to “educate a lot of folks.” Sauve stressed that it is important for people to leave the sticker on their Blue cart so Streets and San can “identify a recycling cart that needs to be picked up as trash.”

While Jeni Greene said that she heard one media clip announcing changes to the program, the new rules and restrictions are not endearing.

It isn’t a true recycling system. When they gave us blue carts we threw all recyclable items in. I collected everything in bags and dumped it in the cart. There never was any problem and it greatly eliminated our garbage. Jan 1, 2016, we get hit with these new restrictions that most Chicagoans never heard of. My neighbor’s cart got the orange sticker and now they won’t recycle.

She continued, “I can’t contain my items in any bag without the city labeling my can as “contaminated”. Ridiculous. The plastic bags from the grocery store are recyclable yet Chicago is claiming they aren’t. I suspect our cash strapped city changed the program so that it would fail and they could abort the effort and save money.”

“All you can do is complain to your Alderman”, said Peter. “When people see a sticker that says their can is “contaminated” you’ve effectively asked them to stop recycling. That word generates a lot of negative emotions and hostility, even if the people are life-long recyclers.” He continued,

I don’t believe we were properly alerted. Had the changes been announced, I think the transition would’ve been smoother on everyone. The city failed and I think Rauner is part of the problem. The state has no budget, the city isn’t properly funded and what better way to lose a program than have people drop out of it due to excessive restrictions.

A recent problem with leaving recyclables loose in the cart deals with the practicality of the matter. Over the last month, Chicago has continued to earn its name, “The Windy City” as we’ve had wind gusts up to 50mph. These strong winds have blown over recycling carts causing the un-bagged contents to fall out and blow down the street. Wind is one of many concerns. The other major concern about this new bagless method is the rat problem Chicago frequently deals with. If contents are loose and not rinsed out well or have any amount of food residue, the odors could potentially attract neighborhood vermin causing a greater rat population and citywide health hazard.

There is a collective bone of contention regarding the use of the word “contaminated.” Residents seem to be in agreement that these new restrictive rules not only came as a surprise, but also are going to cause many people to quit recycling altogether out of frustration. Whether state budget and city funding problems are the underlying causes of the changes to Chicago’s recycling program, or not, residents do not feel these new rules impact Chicago for the better or highlight our standing as a green eco-friendly city.