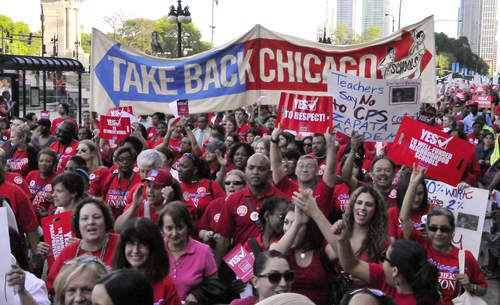 On Friday, twelve members of the Chicago Teachers Union (CTU) who occupied the lobby of the Loop Bank of America building had their first appearance in court after their arrest. About one month ago more than three thousand teachers, staff, parents, students, and their supporters marched in Chicago for a fair contract for the CTU. The protest centered on the Bank of America office on LaSalle Street to highlight the CTU demand for CPS to renegotiate toxic interest swap agreements with the bank. The day before members of the CTU visited the bank and withdrew $726 million of union funds deposited there. While protestors circled the building, CTU members sat down in the bank lobby and chanted. All were arrested and charged with misdemeanor trespassing.

Before heading into court, the teachers held a press conference. Their attorney, Jim Fennerty, indicated that since the assistant state’s attorney was in the court, the state was planning on prosecuting the teachers for their sit-in. “These people are the real heroes here. Public education in the entire nation is under attack by the wealthy and we are going to do everything we can to provide them legal support in their fight.

Natasha Wilson, a Special Education teacher, summarized the position of the teachers who took this action by first focusing on herself as a spokesperson for her students:

“Our education system has given us no choice but to take direct action…I gave a voice to my students…Claypool continues to place our students last like the Bank of America does when they refuse to negotiate toxic swaps….The significant profit from these bad deals continually affect all of our students specifically the most neediest I serve in special education. I understand we made a choice by trespassing, but I knew that any penalties for my “crime” was little in comparison to the crime that occurs every day in my classroom when CPS continual budget cuts negatively impact my students progress, making that progress in vain with their need to put Bank of America and other Rahm financial buddies ahead of my students and the city of Chicago.”

Wilson continued to describe what action CTU expects from not only CPS, but also from Mayor Emanuel and Governor Rauner.

“We have a moral obligation to serve our students and Claypool and the unelected Board of Education continues to plague our system with chronic financial instability…They claim they are being vigilant on behalf of the students who were taken advantage of. However they were not and continue to not fulfill the duty to go out and get the money. They choose to sue Barbara Byrd-Bennett for $20 million, but they won’t take any action against Bank of America for over $500 million. The Board of Education won’t even write a letter [to request a meeting to discuss renegotiation of the bad deals] and refused to accept our letter when we were deemed trespassing. Claypool – we have a shred responsibility, you are right, but that shared responsibility is also between Rahm, the Board of Education and Rauner to take action against these banks and use the economic leverage of the city, CPS and the state to renegotiate the toxic swap deals by putting our students’ interests first.”

Heading into court, Fennerty explained that in discussions with the prosecution the options were to either take a “deferred prosecution” or supervision

period of three months or to go directly to trial. In an unusual twist, the prosecution said the deferred prosecution was only available if all of the defendants underwent psychological testing. Fennerty explained how unusual this was and such testing was typically only used in these cases for drug offenses or if mental illness is suspected. There was no logical explanation for requiring psychological testing for teachers who were trespassing because they were conducting a sit-in. It was likely raised as a condition to undermine the credibility of the teachers and potentially damage their future careers. The testing was rejected by all of the defendants.

Along with all the teachers involved, the Bank of America managers and head of security plus the Chicago Police officers present at the sit-in attended the court hearing. The prosecution and the defense agreed in court to have a conference for the two teams to work it out between themselves.

The result of negotiations was 120 days of supervision and 15 hours of community service for all the teachers involved. None of the teachers can get arrested during that period and cannot have any contact with that branch of Bank of America. There will be a status hearing on June 23, 2016 at 1PM and if there are no violations of the plan, the charges will be dismissed.

Satisfied with the results of the court hearing, all the teachers indicated they remained committed to the struggle to demand negotiations with the Bank of America on the toxic swap loans that could potentially provide much needed funding to Chicago’s public school system.