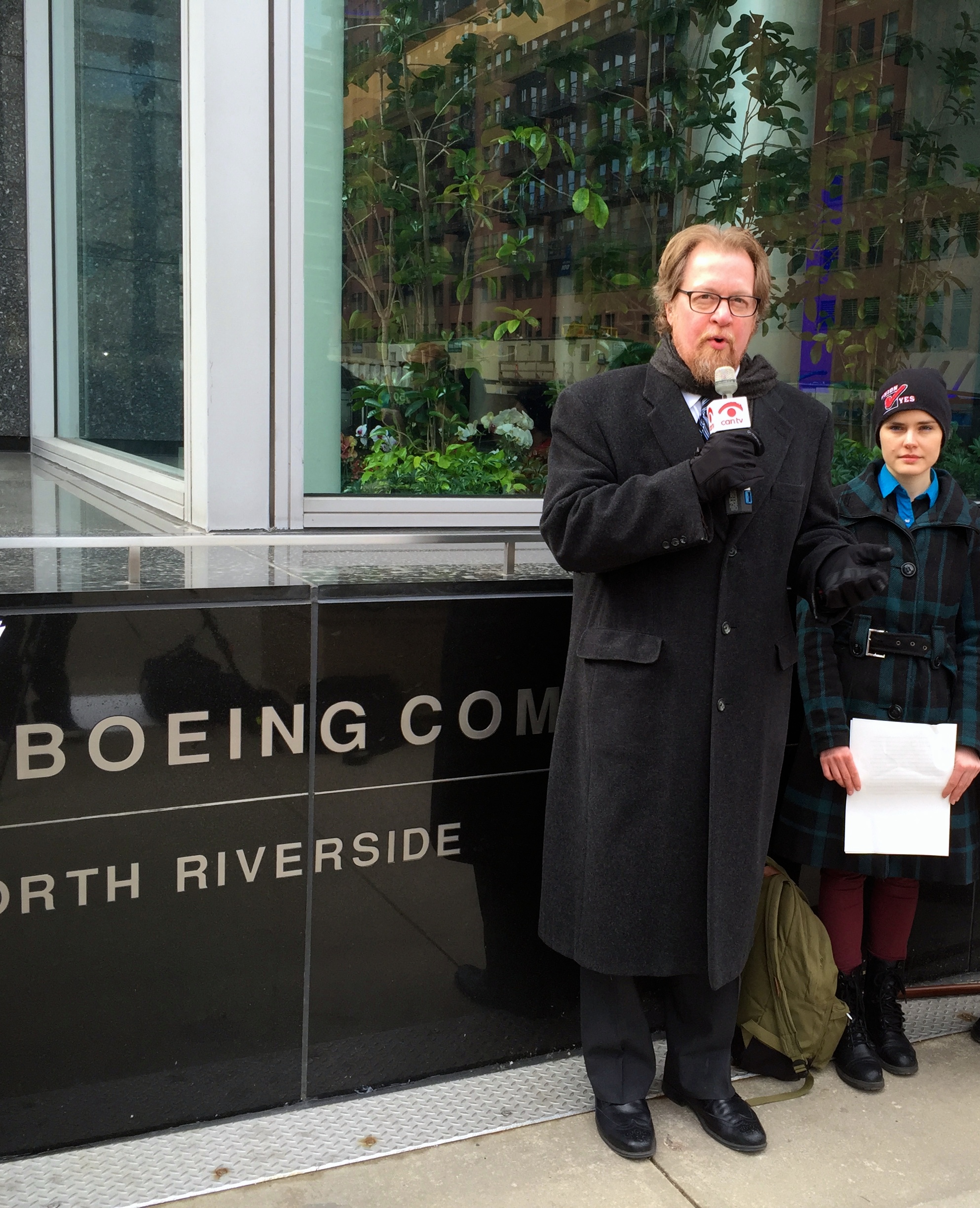 Boeing has been a target of the global movement to Boycott, Divest, and Sanction (BDS) Israel for many years as its weapons were used in Israel’s military attack against the Gaza Strip in 2008-09,  during which 1,300 Palestinians were killed, and again in 2014 when over 2,200 were killed. In both cases, the majority killed were civilians. Boeing produces the Hellfire missile, AH-64 Apache attack helicopters, and laser guided one ton “smart” bombs used in these attacks.  Israel’s actions have been condemned by multiple international NGOs and humanitarian organizations, such as Amnesty International and Human Rights Watch. This year several members of the Anti-War Committee (AWC) of Chicago purchased shares in Boeing in order to bring a resolution before the stockholders demanding transparency and a risk analysis of sales to Israel. According to Richard Berg, who submitted the resolution, “The Boeing board refused to submit our resolution to the stockholders, saying it interfered with the regular business of the company.”

On February 5th, 2016, the Securities and Exchange Commission (SEC) overruled the directors. Berg explained, “Our resolution simply asked for more information about weapons sales to Israel.”

Berg continued to explain his reasons for submitting the proposal

“I made this proposal because BDS has spread worldwide to churches, labor unions, and other groups threatening the viability of the company’s shares. We also believe it is morally repugnant. That is the reason I’m pleased that shareholders will be allowed to vote on this proposal. Boeing needs to be more transparent about what they are doing and to start doing the right thing.”

The core text of the “Shareholder Proposal on Arms Sales to Israel” states:

“RESOLVED: Shareholders request that, within six months of the annual meeting, the Board of Directors provide a comprehensive report, at reasonable cost and omitting proprietary and classified information, of Boeing’s sales of weapons related products and services to Israel.

We believe it is reasonable that the report include:
1. Processes used to determine and promote sales to Israel.
2. Procedures used to negotiate arms sales to Israel, government-to-government and direct commercial sales and the percentage of sales for each category.
3. Disclosure of sales and other arrangements with local security forces.
4. Categories of military equipment or components with as much statistical information as permissible such as contracts for servicing/maintaining equipment.
5. Detailed risk analysis surrounding business relations with countries, like Israel, that have been accused of violating Geneva and Hague conventions and international human rights law.

In light of the flight of investment from Israel, the worrisome prospects of growth, including maintaining partnerships with higher education institutions, for a company that is at the center of Israel’s controversial wars, contributing to the deaths of thousands of civilians and children; and the overall moral and ethical questions raised by selling weapons that contribute directly to illegal occupation, apartheid, and human rights violations, we urge you to vote for this proposal.”

The focus of the shareholder proposal is not to prohibit Boeing selling products to Israel, but to bring the process out in the open. Richard Berg spoke of the great difficulty it is to find out exactly what weapons and weapon systems are being sold to Israel and under what conditions. For example, are there direct sales to Israel or are they part of military aid packages developed by the U.S. government. The activists hope that by exposing the details of these weapons sales to Israel, the Boeing stockholders can make a more informed decision not only whether these weapons sales are financially risky but also whether they violate international law and basic human rights.  Although this proposal only asks for reporting, in their response letter Boeing claimed all of this information was already available.

“Information about Boeing’s defense sales to non-U.S. countries, including Israel, is already publicly available. Boeing’s defense sales to Israel are generally made through the U.S. Department of Defense Foreign Military Sales (FMS) program. Under this program, which facilitates U.S. foreign policy and military aid and assistance activities with allied and friendly nations, Boeing contracts directly with the U.S. Department of Defense, which acts on behalf of the foreign government end-user. U.S. law already requires public disclosure of the vast majority of FMS activity. Less often, when Boeing sells directly to non-U.S. governments, those transactions also are often a matter of public record, either pursuant to Congressional notification requirements established by U.S. export control regulations or otherwise.”

Boeing talks about sales “generally made” through Department of Defense and U.S. law requiring public disclosure of the “vast majority” of military sales – clearly not all data is publicly available. The letter also ignores the crux of the shareholder’s proposal, i.e. “Detailed risk analysis surrounding business relations with countries, like Israel, that have been accused of violating Geneva and Hague conventions and international human rights law.” Amnesty International has already declared that the Israeli Defense Force use of some military hardware violated international law during the Gaza attacks. Shareholders should be able to know whether Boeing has done any analysis of the risk to their business of selling arms to a government that not only has been accused of war crimes, but that is also a major target of the global BDS movement whose impact grows every year.

The Boeing letter also claims “The proposal seeks to micromanage key elements of Boeing’s business, including its relationship with the U.S. federal government, thereby undermining our ability to act in the best interest of shareholders.” But nowhere in the letter does the Boeing management respond to the risks to shareholder stock value by selling weapons to a country using them to target civilians.

AWC’s Kait McIntyre explained that the Boeing board continues to oppose the resolution.

McIntyre cited the U.N. Report in summer 2015 that Foreign Direct Investment (FDI) in Israel dropped by almost 50% in 2014 following the war launched on the people of Gaza.

weapons sales to Israel and 24 doctors and scientists published an open letter in a renowned medical journal stating, “In the aggression of Gaza by Israel…we witnessed targeted weaponry used indiscriminately and on children and we constantly see that so called intelligent weapons fail to be precise, unless they are deliberately used to destroy innocent lives.” Protests were also held outside of the Boeing stockholders meeting in Chicago that year.

Seven major universities in the United States have passed divestment resolutions that included Boeing due to the company’s ongoing arms sales to Israel.

Israel recently completed their largest arms deal with the U.S., to purchase almost $2 billion in ordnance. Boeing manufactures the largest components of the bombs and missiles, including the guidance systems that turn regular bombs into “smart bombs.” A report by Amnesty International showed that the bombings which caused the most casualties in Gaza came from Boeing’s laser guided, one-ton bombs, the MK-84/GBU-31.

McIntyre cited the growing impact of the movement to Boycott, Divest and Sanction (BDS) Israel to show the potential impact to Boeing’s financial standing. In Chicago, the student government at the University of Illinois at Chicago passed a BDS resolution from Students for Justice in Palestine that added Boeing to a list of companies they want the school to divest from because of weapons sales to Israel.

McIntyre also pointed to the impact on brands such as SodaStream, a target of BDS protest for operating a factory in illegal settlements in the West Bank. The company admitted that their share price tumbled in 2015 in significant part because they had to move to a new plant in Southern Israel.

“Our primary concern is how our investment is being used. Hopefully it is to promote good and not being used to bring harm to others, ourselves, or the environment….We seek transparancy.”

The Boeing stockholder meeting will be held on April 25 at 10:00AM at the Field Museum in Chicago and multiple members of the groups at the press conference plan on attending to speak in favor of the proposal.