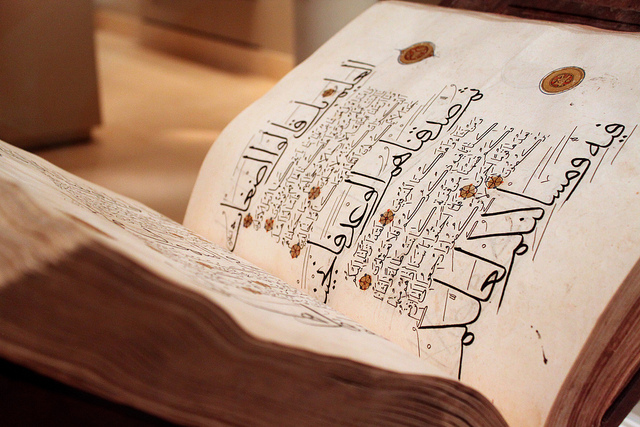 There are several instances of Muslims being at the forefront of early American history. In each of these instances, the Qur’an was a key component of the Muslim witness of American history. Anthony Van Salee was one of the first Muslims to settle in Brooklyn; Job ben Solomon was the subject of the first slave narrative in the United States and Great Britain; Salim the Algerine attended the first Continental Congress; and Thomas Jefferson bought a Qur’an and made a treaty with Morocco.

Anthony Jan Janzoon van Haarlem (1607–1676) was the son of famed Dutch pirate Jan Janszoon van Haarlem. He is considered the first European Muslim to build the first settlement in New Utrecht, present-day Brooklyn, New York. Anthony Janzoon Van Salee warrants a special place in New York history as the first man to settle in Brooklyn after Peter Minuit famously bought the island for trinkets worth $24. Together they founded rural settlement. Intriguingly, his legacy included a beautiful copy of the Qur’an, an indication to some that he had secretly maintained his Islamic faith. This Qur’an vanished in the 1920s like the three hand-written Qur’ans of Job ben Solomon.

Ayyub was a slave who is mentioned in literature on slavery as Job ben Solomon. His 1734 biography is the most accessible of these early Muslims and is perhaps the earliest biography of any African American according to Allan Austin, author of African Muslims in Antebellum America: Transatlantic Stories and Spiritual Struggles (London: Routledge, 1997). However, it was definitely the first slave narrative offered by sale through advertising in a newspaper.

There are many claims of him being a highly literate Arab scholar. Three copies of the Qur’ān were supposedly written by his hand. However the four extant letters by him show little evidence of an ability to write more than a greeting and a few Qur’ānic phrases. His knowledge of Arabic was great enough to aid the curator of the British Museum, Sir Hans Sloane, in translating a few coin inscriptions. He also drew a map of his homeland with place names written in Arabic.

Ayub Sulaiman ibn Diallo became a go between for his people and the British after his repatriation. He continued to practice Islam during his two years of slavery in the 1730s in Maryland. He was versed enough in Arabic to write at least a half dozen letters in that language, translate coin inscriptions for the British Museum, and draw a map of West Africa writing place names in Arabic. After being freed at the hand of Governor Oglethorpe of Georgia, he wrote three complete copies of the Qur’an from memory.

When he returned to Africa he would act as a trade agent for the British and French. Job can be described as a slave that wrote his way out of slavery by attempting to send a letter in Arabic to his father in Futa Jallon to ask for help to ransom him from slavery in Maryland. Job’s anamnesis Thomas Bluett was a practicing attorney in Kent County, Maryland who had gone to England to study for the ministry and for ordination. However, he returned in 1728 to work at Dover in Kent County for the mission maintained by the Society for the Propagation of the Gospel. He was a strange partner to be Job’s biographer since he was known for intemperance, while Job was known for temperance. Bluett’s biography of Job is entitled Some Memories of the Life of Job, the Son of the Solomon High Priest of Boonda in Africa; Who was a Slave about two Years in Maryland; and afterwards being brought to England, was set free, and sent to his native Land in the Year 1734 (London: Richard Ford, 1734). Job’s letter was written in 1731, but it was a full seven months after it was written before the path for his freedom from bondage was realized. His Arabic literacy did lead to his becoming a member of the Spaulding Gentlemen’s Society and to his working with Sir Hans Sloane and George Sale on Arabic translations when he was in London.

Job’s Letter to his father can be seen as an example of writing one’s self out of slavery and he was one of the first slaves in America to have done this. My translation of his letter is below.

Job’s Qur’an was rediscovered in 2013. I immediately posted to as many Muslim sites as I could to see if the Muslim community could own and preserve it. However, it was sold in an auction by Bonhams in September 2013. Its current location is in a private collection in Europe and it has retreated from public sight for who knows how many more years.

Salim the Algerian was a Muslim from a royal family of Algiers that studied in Constantinople.

After returning from a visit to Constantinople, he was captured by a Spanish Man of War and later sold into slavery to the French in New Orleans. Eventually he became free after running from slavery, lived among American Indian tribes, and settled in Virginia. Salem was found in rags, almost naked, and was taught English. When it was ascertained that he knew Greek, he was given a New Testament in the Greek language. Several future members of the U.S. Congress befriended him and he converted to Christianity. A new convert to Christianity he decided to go back home to spread the Gospel.

After a disastrous journey to his homeland (where he was shunned as an apostate), he returned to America, met Thomas Jefferson, attended the 1st Continental Congress, and died an insane man having given up his family and religion for America. While he was at Congress his picture was painted by a Mr. Peale after the intervention of a member of the Congress Mr. Page.

Near the end of Salem’s life, he regained his long lost sanity. He had been insane since his trip to his homeland after his conversion to Christianity. Some say he renounced Christianity, others say that he died a Christian at the Page estate, and still others say he died in an insane asylum (Graham’s Magazine, 1857, pp. 433‑437).  However, we do know he lived in a windmill and attended Congress as a visitor. Salim’s story would be later detailed in a juvenile novel entitled The Golden Horseshoes or in the Days of Jefferson by Hezekiah Butterworth. Perhaps rereading such novels will help overcome the idea that Islam has no right to be in the United States.

The so-called founding fathers of the United States engaged Islam and allowed them a place in the pluralistic society. His copy was the translation from George Sale. It was the copy that Keith Ellison took his oath of office on. Jefferson studied Islam, allowed the possibility of Muslims having a place at the table in the new country, and made a treaty of peace and friendship with Morocco. The new nation was recognized by the Muslim world with Morocco taking the lead in the 1770s. When we compare this welcoming attitude of Jefferson with today’s presidential candidates supporting Muslims being barred from entering the US and their countries deserving to be bombed, this long history of the Qur’an and Muslim presence in American history is ignored.

Technology Has Changed the Way a Whole Generation Practices Religion