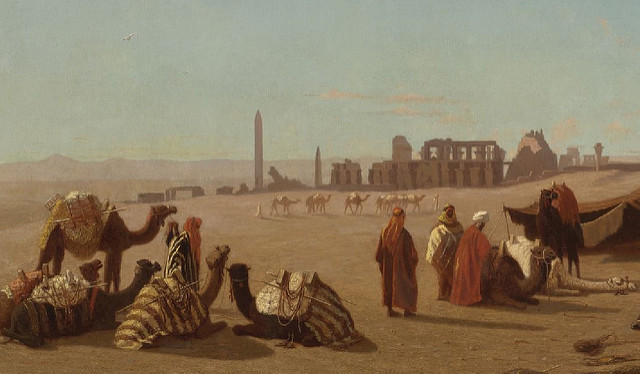 The Secretary of War, Jefferson Davis introduced a bill in Congress that passed in 1855, to import camels for military purposes in the Arizona desert. During the experiment, 77 camels and six handlers were brought over from the East. It began in earnest when the cargo ship “Supply” brought thirty-three camels to Indianola, Texas on May 14, 1856. The next year, 1857, an additional forty-four camels were imported. The camels were given a variety of names. Some were Arabic and others had English names. One was even called “Uncle Sam.”

The cameleers received $50 a month plus food and lodging. They had trouble getting their money on time and three of the cameleers demanded passage to be sent back to Syria and Turkey. The experiment would last only a year or so longer. When the War Between the States broke out, this experiment was abandoned.

Haji Ali, Greek George, and Hajj Ali’s brother were the only ones of the cameleers to remain in the U.S. Elias moved to Mexico and the others returned to their homelands. In Mexico Elias married a Yaqui girl and became a rancher. He became famous in Mexico when his son, Plutarcho Elias Calles, became President of the Republic from 1924-1928. Greek George would settle and build a ranch where the Hollywood Bowl would later be built. However, rumor abounded for years that he was killed when escaping from prison for being a horse thief. Neither was true however. He became naturalized as George Allen and Greek George faded into history. Blackie would become a barber in Tucson, Arizona and outlive Hajj Ali by over ten years.

Circuses and zoos acquired some of the camels and others were turned loose. The camels that were turned loose in the desert terrorized livestock and wild animals for years. Some became food for Native American hunters, a few worked as pack animals in mines, and Hajj Ali even kept a few (Maya and Toulli) as workers to pull his wagon.

For a brief time, Hajj Ali was an aid to one of the mining operations in Colorado. An 1873 article tells of 79 camels being led through the streets of Tucson by this cameleer. Those camels were on route to Fort Yuma. The camel, Greek George, and Hi Jolly were stranded when the mine owner died. They had to fend for themselves. Greek George went to Los Angeles. There he bought a ranch and married Conception Vajar (age 57) in June of 1900. Hajj Ali mined a while using camels in the desert.

Once Hajj Ali ran his wagon through the middle of a German picnic on the outskirts of Los Angeles; Sauerkraut, bratwurst, and beer rotted on the ground for weeks afterwards. As a youth he fought with the French and Algerians and shared with them contempt for all things German.

The wild camels eventually became small herds and rumors of wild camels in Nevada, Arizona, California, and New Mexico exist until the 1940’s. Miners and ranchers shared many a story of the Red Ghost and wild camel herds around low burning campfires. In fact, a wild herd of sixteen camels was reported in the Sept. 8, 1905 issue of Goldfield, Nevada’s Goldfield News.

One of the camels became a legend on its own. In 1883 a red haired camel began to terrorize the wilds of Arizona.

He trampled a pregnant woman to death, and scared livestock for years. The vagrant former U.S. Army Camel was nicked named the Red Ghost for its red fur. In 1893 an angry farmer who caught him grazing in his vegetable patch finally killed him. When the red haired camel was examined closely it was found that a headless skeleton with rags hanging lose on it’s from was tied to its back. Some speculated that a thirsty prospector captured him and tied himself onto its back to be able to find water when the camel went for a drink. Over the years the stench of a dead rider on its back made it mad and lead to its aimless wandering.

Haji Ali became a prospector in the Colorado River Area. He eventually became a legend under the corrupted name given to him by soldiers in the U.S. Calvary – Hi Jolly. A popular folk song was written in his name “Hi Jolly.” The legacies of this experiment are a highway grave marker for Haji Ali, some U.S. Army Manuals such as “Report upon the Purchase, Importation, and Use of Camels and Dromedaries, to be employed for military purposes” and a movie by Walt Disney called “Hawmps” – starring Slim Pickens and Denver Pyle.

Before coming to the United States, Hajj Ali lived in southern Turkey. Rumors of his origins range from being a kidnapped Greek who was raised as a Muslim to a Muslim with a Greek mother and Turkish father. The later is probably accurate as he was naturalized as Phillip Tedro. His brother Blackie was naturalized as Charles Tedro. It is not known if either died as Muslims, but there are stories having them praying and fasting after they settled in the southwest. Several sources (mainly Ahmadiyyah) have Hi Jolly being the imam of a small mosque and raising his daughters as Muslims. Even if this could be proven, who would his Jamaat (assembly or congregation) have been?

After their failed adventures in mining, Greek George became a rancher and Hajj Ali went back to work with the U.S. Army as a mule packer at an Army post in Tucson. There he married Gertrude Serna (b: Nov 1859 in Hermosillo, Mexico – 6 May 1936 in Tucson, Pima County, Arizona) on 23 Apr 1880 in St. Augustine Cathedral, Tucson, Arizona. She was the daughter of Fernando Serna and Maria Espinoza. They had three children together: Amelia, Minnie, and Fernando Serna Tedro. Gertrude worked as a seamstress and lived with her son and daughters.

San Bernardino County, California). Minnie was married to Charles William Hansford – a railroad yard policeman (b: 23 Jul 1882 in Mayfield, Kentucky – 28 Jan 1923 in Tucson, Pima County, Arizona). He died from Small Pox. They had no children. Minnie worked as a seamstress and lived with her mother and nephew Arthur Smalley in Rialto, California.

Fernando Serna Tedro (b. Sep 1891 in Tucson, Pima County, Arizona -?). He worked as a carpenter in a railroad shop. He lived with his mother and sisters. I have yet to find a death date or obituary.

Hi Jolly continued with Army work at Huachuca and other places until the surrender of Geronimo in 1886. In 1889 he left his family behind and went back to the life of a wandering desert prospector with the few camels he still had. In 1898 he was forced to return to Tucson due to declining health and begged his wife to take him back but she refused.

Haji Ali lived to December 16, 1902 in Quartzsite, Arizona where he was a failed prospector. Local merchants such as Mike Welz helped him with handouts. Congressman Mark Smith even tried to get him a pension, but since he was never an official soldier in the Calvary the paperwork wasn’t processed. A few sources (mostly Ahmadiyyah or those repeating their claims) proclaimed that he was a resident Imam and that his three daughters were raised as Muslims, but I have yet to verify how many generations Islam continued in his family. All the old prospectors in the area attended his funeral, but no preacher or Imam was available to give funeral prayers. Afterwards a small wooden sign marked his grave. In 1934 the elaborate pyramid monument topped by a camel weathervane was placed on his grave by order of James L. Edwards of the Arizona State Highway Department.

The Ballad of Hi Jolly

Hi Jolly, hey Jolly
Twenty miles today by golly
Twenty more before the morning light
High Jolly Yeah, I gotta be on my way
I told my gal I’d be home Sunday night.

Hi Jolly was a camel driver long time ago
Followed Mr. Blaine a way out west
Didn’t mind the burnin’ sand in that God-forsaken land
But he didn’t mind the pretty gals the best

They got pretty gals in Albuquerque, least that’s what I’ve heard
Pretty gals in Tucumcari, too
Now, Honey, I ain’t blind, but I don’t pay ‘em any mind
I’m savin’ all my lovin’ just for you