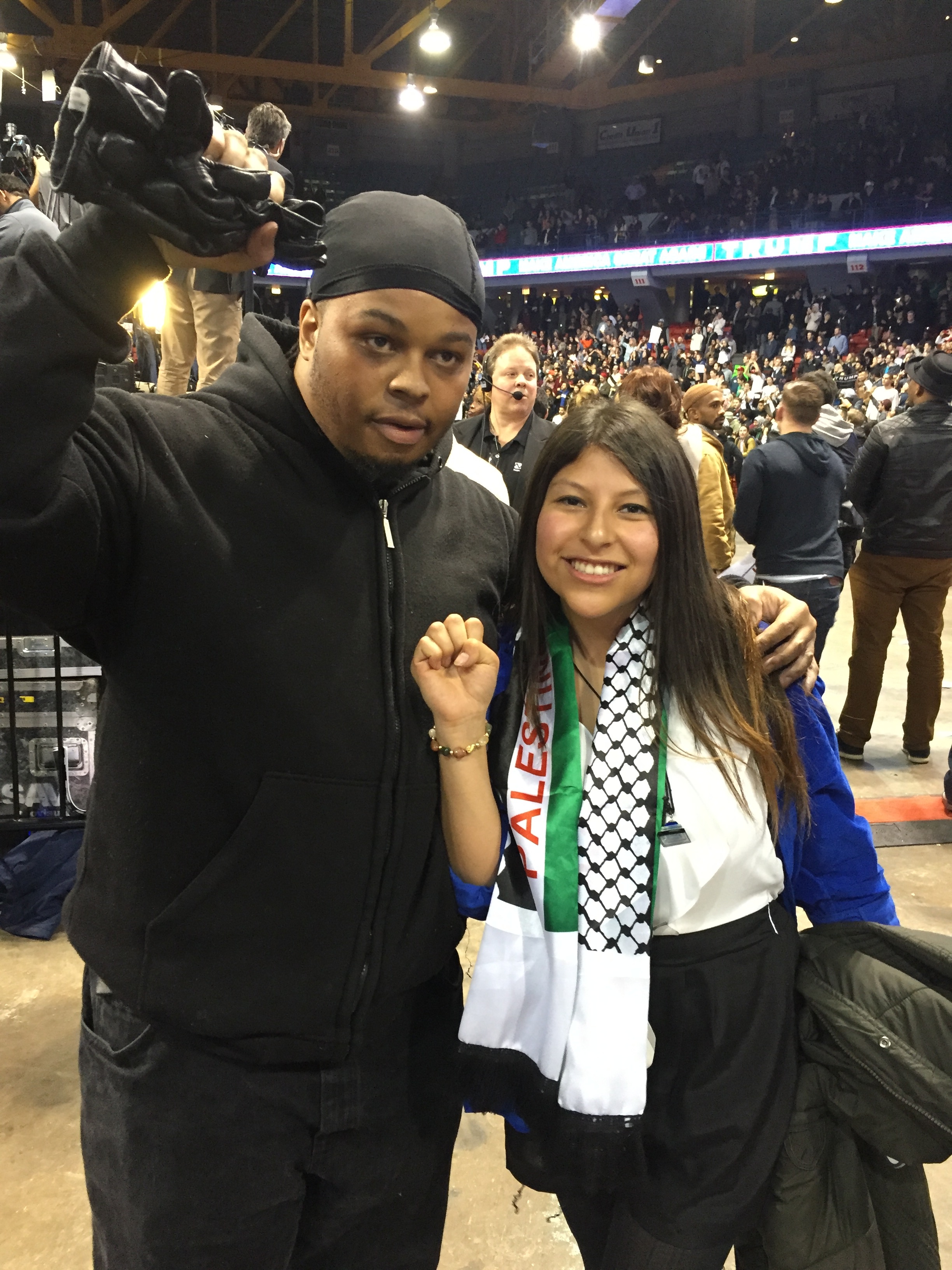 There were about 3000 protestors outside the Trump rally in Chicago last night and about 1000 inside. While waiting for the never-to-appear Trump, small groups of protesters would chant or verbally spar with those Trump supporters wearing shirts like “All Lives Matter.” Trump campaign officials called the Chicago Police Department (CPD) to escort individuals out while Trump supporters cheered. As the 7,000 seat Pavilion filled up, it became clear that if 15% of the crowd were protesters, Trump would not be able to make a show out of “get them outta here” as he has done at other rallies. But if you watched any of the local, national, or cable news immediately after the rally was called off, you would be sure that the “violence” of the protesters is what forced the rally to be cancelled. And that is exactly what the media and the Trump campaign want you to believe.

The UIC Pavilion seats were filled as well as about 300 people including media standing on the floor in front of the stage when a Trump campaign spokesperson said:

“Mr. Trump just arrived in Chicago, and after meeting with law enforcement, has determined that for the safety of all of the tens of thousands of people that have gathered in and around the arena, tonight’s rally will be postponed to another date. Thank you very much for your attendance and please go in peace.”

The CPD was quick to provide a statement that it was the Trump campaign that cancelled the event. According to the Associated Press, CPD spokesman Anthony Guglielmi said the agency never recommended that Trump cancel his campaign rally in the city and never told the Trump campaign there was a security threat at the UIC Pavilion. He said the department had sufficient manpower on the scene to handle any situation. Guglielmi said the university’s police department also did not recommend that Trump call off the event. He says the decision was made “independently” by the campaign.

To all who were inside the packed venue waiting for Trump to appear, the announcement sounded as if Trump was “postponing” the event for people’s safety, but neither the CPD nor UIC security believed it was a problem.

Trump continued to reinforce this message that protestors were creating a safety concern and the decision was made with law enforcement.

In a telephone interview with CNN last night, he said the event was cancelled because he didn’t “want to see people hurt or worse…We made the decision in conjunction with law enforcement…They said “it would be better not to do it and I think we did the right thing.” In the combative interview with Don Lemon, Trump defended his previous statements about protesters being taken out on a stretcher and punched in the face by blaming all violence on protestors. “I don’t take anything back…I’ve seen strong protesters hitting people, sometimes it’s the police.”

Trump was not telling the truth about his “meeting with law enforcement” about there being safety concerns. When the cancellation announcement was made, the CPD has the thousands of protesters outside behind barricades across the street from the Pavilion. There was a lot of chanting and speeches from the very diverse group of protestors and very long lines of people peacefully waiting around the Pavilion itself to be admitted. Inside the venue, there were hundreds of protesters sitting in seats and on the main floor, but most were waiting quietly for Trump to show up. Some individuals were taken out by the CPD, but only because they refused to stop chanting or wouldn’t leave when instructed.

The most likely reason the Trump campaign cancelled the rally was that as the Pavilion filled up; it was obvious that there were hundreds of protesters inside. More than they had ever seen at one of their rallies. Some whole sections of the stands were protesters so there was no way they all could be carted out by the CPD as security had done at other rallies. If Trump would have actually spoke, his whole speech would likely have been completely disrupted just by protesters chanting which would have looked terrible on national TV. So the Trump campaign “postponed” his rally and blamed it on the “violence” of the protesters.

So who were these protesters?

Many were UIC students from one of the most diverse universities in the area – Blacks, Asians, Latinos, Arabs, and Muslims. Student groups including the Young Democrats, Students for Justice in Palestine, the Black Student Union, Muslim Student Association, and Mexican Students of Aztlan. Many analysts have commented that anyone Black or who looks Muslim (like a woman wearing a hijab) have been targets for assaults by Trump supporters at previous rallies. In Chicago, there were hundreds of these “targets.” Not only individual Trump supporters but also apparently the Trump campaign itself was intimidated. A protester’s shirt said it best – “Your Fear of Black Men is Irrational.”

Chicago groups including Black Lives Matter – Chicago, Black Youth Project 100 (BYP100), We Charge Genocide, Chicago Alliance Against Racist and Political Repression (CAARPR), Immigrant Youth Justice League (IYJL), many Chicago Teachers Union (CTU) members, and others from the local Latino community were all part of a wave of solidarity protesting Trump. There was also a large continent of Muslim students and community members both outside and inside the Pavilion standing up in large numbers to Trump’s continued Muslim-baiting rhetoric. Just the day before, he had claimed “Islam hates us” in a  interview with Anderson Cooper.

But this was a UIC student led protest – demanding that Trump and his message of hate and racism get off their campus and out of their community. In the Facebook event for the protest, the students were very careful to call for a peaceful protest –

“Trump has been known to provoke and encourage violence towards protesters in the past. Past protests have seen individuals be spit on, kicked, hit, shoved, and assaulted in various other ways. With that being said, our strength will lie both in our numbers and our ability to show these Trump supporters a higher class of behavior. We do not condone and will condemn any physical contact with supporters attending the rally; please keep your hands and items to yourself. Our goal must be to show the attendees the empathy, acceptance, and love that we strive to see in the world. Keep any signs and chants aimed at Trump and his campaign, instead of individual supporters.”

And the students kept to their plan. But they were also very clear about what they were protesting for all who wanted to listen

“Reasons for protesting:
-Trump has called for the complete and total shutdown of all Muslims entering the United States. He has claimed that Islam and Muslims are hateful and terrorists and must be barred entrance until he decides otherwise.
-Trump has generalized the entire Mexican immigrant community as criminals and rapists. He calls for the mass deportation of 11 million adults and children alike regardless of how long they have lived in the United States. He also calls for the building of a giant wall to separate us from our long-time allies in Mexico.
-Trump has advocated FOR war crimes such as but not limited to torture-interrogation, mass murder as a warning, the intentional murder of entire civilian families, and indiscriminately bombing of countries in the Middle East.
-Trump has consistently refused to disavow and condemn the white supremacist hate groups such as the KKK that support and work for his campaign.
-Trump has preyed on the fears of poor and middle class whites while at the same time not offering any policies that would support them in overcoming the very serious and real challenges that they also face in America.
-Trump’s nativist, nationalist, and fascist stances parallel the most evil leaders this world has seen such as Adolf Hitler and Benito Mussolini.
-Trump shows a childlike temperament that would jeopardize our national security and potentially start unnecessary conflicts.”

Respecting the rights of free speech and the right of peaceful protest, security did not stop protesters who had tickets from coming into the rally. At one point even on the main floor, there were UIC students with kefiyyehs, Palestine scarves, BlackLivesMatter T-Shirts, and hijabs mixing peacefully with men in camouflage hats and Trump buttons.

When it was announced that the Trump campaign had “postponed” the rally because of security concerns, hundreds in the crowd started cheering, “We stopped Trump!” This was the point where many of the Trump supporters became angry at all the celebrating and after several minutes, there were two or three fights between Trump supporters and Black protesters. The videos of these fights were the ones that the media showed repeatedly to mislead the public that there had been widespread violence by the protesters.

This is the first time that a Trump rally was cancelled before it even started because of widespread protest. It will very likely not be the last. Now we know there are two things Donald Trump is afraid of – Megyn Kelly and the people of Chicago.