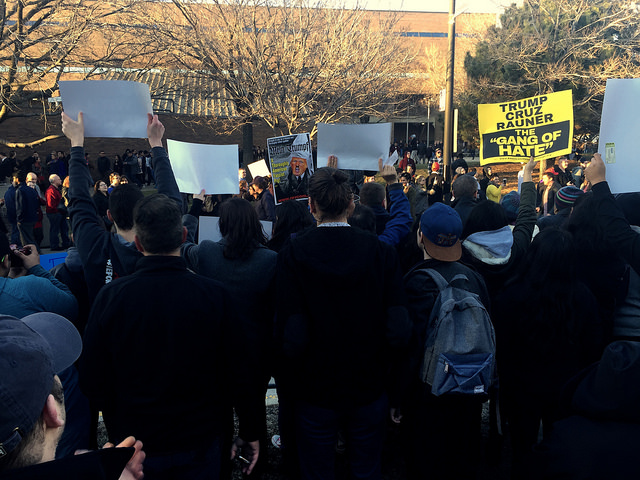 Facebook
Twitter
Pinterest
WhatsApp
Email
Print
On March 11, 2016, the UIC Pavilion will provide venue space to an expected 9,500 Donald Trump supporters for his campaign rally. The Republican businessman turned Presidential candidate is scheduled to speak at 6pm. DNAinfo.com reports that over 180 UIC professors and staff members have concerns regarding the safety of their diverse staff at the UIC Pavilion as well as the prospect of hostility and physical violence towards students, alumni, and faculty alike who come to express their opposition.
Trump campaign rallies have gained notoriety for their encouragement of violence and removal of protesters. Chicago organizers are hopeful that with a massive show of protesters at Trump’s rally, there will be a lower risk of encountering violence. Representative Luis Gutierrez has vowed to stand outside the UIC Pavilion in solidarity with protesters.

Shortly after Trump’s announcement, protesters began organizing their opposition, starting with a Facebook campaign called “Trump Rally Protest” to stand in solidarity against the Presidential candidate. As of Thursday, nearly 10,000 people signed up to take part. Concurrently, another petition campaign opposing Trump’s rally at the UIC Pavilion, has reached over 49,280 signatures.

Trump who has openly expressed his racist, commonly xenophobic ideals has said that he would put a “temporary” ban on Muslims entering the country if elected. MSNBC ran a story quoting Trump going so far as to say he “would certainly implement” a database system tracking Muslims in the United States. In January 2016, a Muslim woman named Rose Hamid was escorted out of a Trump rally in the midst of her silent protest. In his latest statement negatively categorizing all Muslims, Trump told CNN’s Anderson Cooper last night:

The University of Illinois at Chicago has gone to great lengths making sure it is inescapably clear that while the UIC Pavilion is the rental space for Trump’s campaign rally, they are not endorsing his or any other campaign. University Chancellor Michael Amiridis sent a letter to staff and students earlier in the week explaining that it is University policy to rent space out to political candidates, regardless of where they stand on the issues. “UIC encourages public and civic engagement and endorses that the ideal answer to speech that does not like, or finds offensive is more speech and not censorship,” Amiridis wrote. Further, “UIC’s core values and diverse community are not endangered by the presence of any political candidate, no matter what.”

Regardless of the efforts by the UIC Chancellor, students are confused about Trump’s choice of venue and are not convinced that Trump’s rally is a positive for the University.

UIC student, Aamna stressed how odd it is that the very diverse campus of UIC was chosen as the venue for the rally.

It’s ironic that Trump has chosen UIC to hold a rally at. We are one of the most diverse campuses in the nation. Minority groups constantly show solidarity with each other at UIC. We stand together and will counter the hatred he brings with nothing but love for each other as fellow humans. We have too much regard for each other to let a tyrant separate us. At first, I was a little scared of him being on my campus, but I know that as a community he can have no effect on us.

Another UIC student Mashia spoke of Trump’s views on preventing people from immigrating to the US.

I feel as though some of his ideas such as preventing individuals from certain religious and ethnic groups immigrating to the United States go against the fundamental ideas of our country. Our country is known to be a place where everyone is given an equal opportunity and one’s ethnicity or religion doesn’t make them less American. I am all for freedom of speech, but I feel as though some of the things he wants to accomplish through his campaign would impinge on the freedom of many individuals.

Finally, another UIC student Sana expressed the need for students to actually hear his negative views, but questions the rally’s location.

I guess since it is a public university, it’s okay to have different opinions shared, but personally I find Trump’s ideologies to be propaganda and when the university encourages someone like that and gives them a platform it’s problematic. Higher education is about being intelligent enough to form informed opinions and allowing someone with so much hatred and bigotry to preach to students takes away from that. I could potentially see this going well if people hear the words from him in person and realize how stupid his ideas are, but I don’t think a college campus is the place to do that.

Despite the massive staff and student opposition to Trump’s rally, it looks like UIC will continue on as planned and provide the venue for the Trump campaign, March 11.