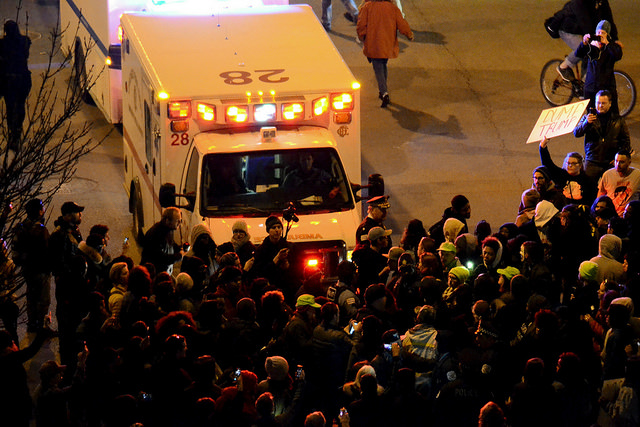 As the presidential primaries have moved west and candidates continue to reach out to American voters, protests continue against Donald Trump. Crowds marched in front of the Trump Tower in New York on Saturday, chanting slogans condemning the hateful rhetoric that has become a staple of his campaign. Meanwhile protesters blocked an Arizona highway leading to the Trump rally, creating more mayhem though it’s difficult to discern the activity on the ground based upon the rally in Chicago the week before. The media and conservative columnists harp back to the pattern of “violence” that ended the Trump rally in Chicago. But were the protestors violent? Has the media ever interviewed the actual organizers of the Chicago movement against Trump’s hate rhetoric that resulted in a rally-that-never-happened?

Lost in the media blather are the organizers of the Chicago UIC protest, college students that feared Trump’s presence on their campus – their home for 2-4 years in pursuit of higher learning. Missing from the television ticker were the real life emotions and uncertainties of UIC students having no choice but to share their campus, a public space, with Trump supporters- jacked up on campaign rhetoric.

Students took the initiative to speak out against the dangerous rhetoric of the Trump campaign- amid increasing incidences of supporters directing anger and even violence towards people of different cultural and ethnic backgrounds.

“Students were afraid that Trump and his supporters would be on campus,” said Rodriguez. “These are hard core people- KKK, Nazis. We are standing up to extremist, right wing viewpoints: homophobic, sexist, xenophobic, Islamophobic.”

UIC student organizers mobilized to develop a plan to protest the event which comprised a myriad of organizations including students from DePaul University and other groups such as: Students for Justice in Palestine (SJP), Muslim Students Association, Third Coast Queer Muslims and Students for Bernie Sanders. Though student supporters of Bernie Sanders wished to use the opportunity to encourage protest goers to sign up to vote, this noble cause was quickly taken off the table. Organizers made it clear they were not endorsing any candidate.

“We wanted it to be about empowerment,” Robledo explained, “Nonpartisan. Apolitical. Bernie was not associated with us.

There were some republicans in the crowd with us who were also against the rhetoric.”

The organizers sought to inspire people of all races around the United States to stand up against fascism and white supremacy. Similar to the demographic landscape of previous Trump rallies, the overwhelming majority of Chicago rally supporters were Caucasian.

Nathaniel Lewis, an articulate young man with a composed demeanor, made it clear that he was in no position to judge anyone else. “Trump is a person. I am a person. Is this about him personally? No. But the message he has put out is negative and counterproductive to a progressive society. We are responding to the actions he has taken and the words that he has said. We can stand up against the words.”

The student organizers and protesters that were inside the Pavilion seem to agree that the main skirmish defining the essence of the entire event on television, was being overblown. Laurie Hasbrook, a 57 year old, Caucasian woman was in close proximity to the fight that started between the white, male Trump supporter and an African American male protester- stating that the Trump supporter was “very belligerent,” taunting the protester.

“It was quickly de-escalated by law enforcement and they were taken out. It was done so fast, yet the news plays it over and over! It happened. It was over. And the celebration continued with dancing and cheering.” Hasbrook, a petite woman wearing a t-shirt bearing the words, Bridges Not Walls, fully expected to be escorted out of the arena for her choice of protest attire. She was not kicked out of the rally and says that she never felt unsafe during the event.

Lewis expressed his dismay at the way major media outlets were portraying their protest, undermining the experiences that people inside and outside were having, “It’s an interesting position to be in,” he expressed. “The vulnerability. We were concerned about the safety of our students. And to be portrayed as aggressors? It’s disheartening to hear the story told as the opposite of what actually happened.”

There were those individual instances of supporters and protesters facing off with provocative language and tensions stemming from both sides.  But there was little time for he said / she said as far as the news outlets were concerned. “They were reporting images instantaneously and coming up with captions that lacked any context to the actual situations on the ground, said Cruz Rodriguez, “When I saw the headlines, I thought: This is exactly what Trump is trying to make this out to be.”

outcome than they could have imagined, but not one they themselves ever expected- even though concurrent to their event, an unassociated petition was gaining momentum on social media in an attempt to get the rally cancelled.

The plan was to stand up in protest when Trump was at the podium – fully expecting to be escorted out by law enforcement. “No one went in with the intent to start anything,” said Robledo. “We’re students. We didn’t want to give out a bad message. The organizers did not aim to shut the rally down. We wanted to give a voice to everyone – Mexicans, women, Muslims – different groups that Trump’s campaign has not been kind to. The whole point of this was to show that we have a voice; and, we’re not afraid. We didn’t go in with the goal to stop the rally.”

It was evident at the rally that you have to be white according to Lewis who fretted over choosing his protest attire, opting to wear a Dashiki under his jacket. They warned protesters that they would be profiled. “If you were of different ethnicities, people were making it evident that they didn’t want you there. You were being stared down. We were profiled. People were escorted out because they looked like they didn’t support Trump.” 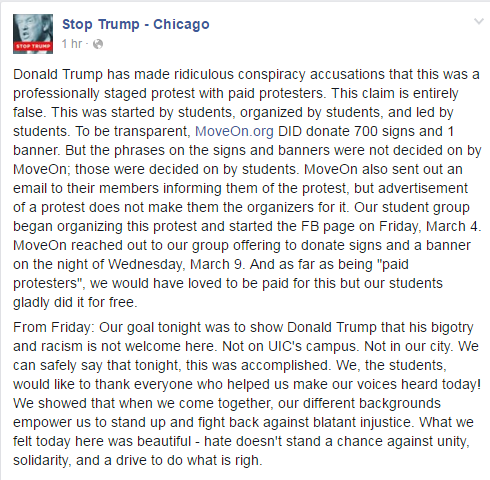 “If you were any shade of anything, “Rodriguez said “the vibe was ‘you don’t belong here.’ Everyone was looking at you. A Trump supporter wearing a Trump t-shirt, head shaven, tried to attack someone holding a sign. He was in the pit. He went over the fence and it got out of hand. Eventually he got kicked out. There were a lot of hijabis inside the Pavilion. Muslim women.”

The atmosphere inside the Pavilion changed abruptly when the announcement was made that the rally was cancelled. Elated

“We quickly threw up peace signs as they charged towards us, stated Rodriguez, “The tension was really high. People said provocative things to each other- but the crowd made its way out of there easily.”

Individual skirmishes were de-escalated quickly by law enforcement. “There was no widespread violence,” said Laurie Hasbrook. “To suggest so, and make it the focus of reporting is irresponsible. Apparently, there were three minor injuries reported. Not good, but hardly a melee. As we left the Pavilion there was indeed tension in the air, and some testosterone infused exchanges. But the overall atmosphere was one of happiness and empowerment.”

On the “Thug” Label

“WE really did this, says Lewis. “Our generation doesn’t get credit like Trump’s generation gets.”The propelling of the thug label in many new outlets makes the victory bittersweet. “To be called a thug? Actually, we’re individuals that understand it’s our future we’re talking about. Here is a person that can influence our position in the world – promoting division and oppression. This is what we are standing up against. We want things to change. Progressive ideals benefit everyone.”

On Police Telling Trump to Cancel the Rally

From all accounts, the Police had everything completely under control. UIC police and secret service covered inside the Pavilion while Chicago Police managed the outside. There was also help from Illinois State Police.  As far as Trump’s campaign conferring with police, Cassandra Robledo was quick to remark, “It’s a lie.” 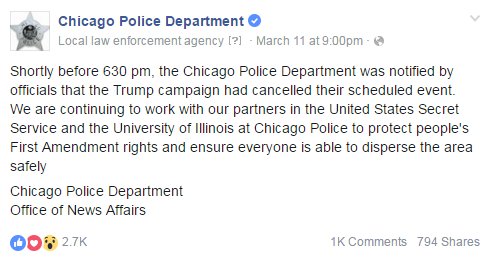 The Chicago Police Department confirmed that they never talked with Trump’s campaign.