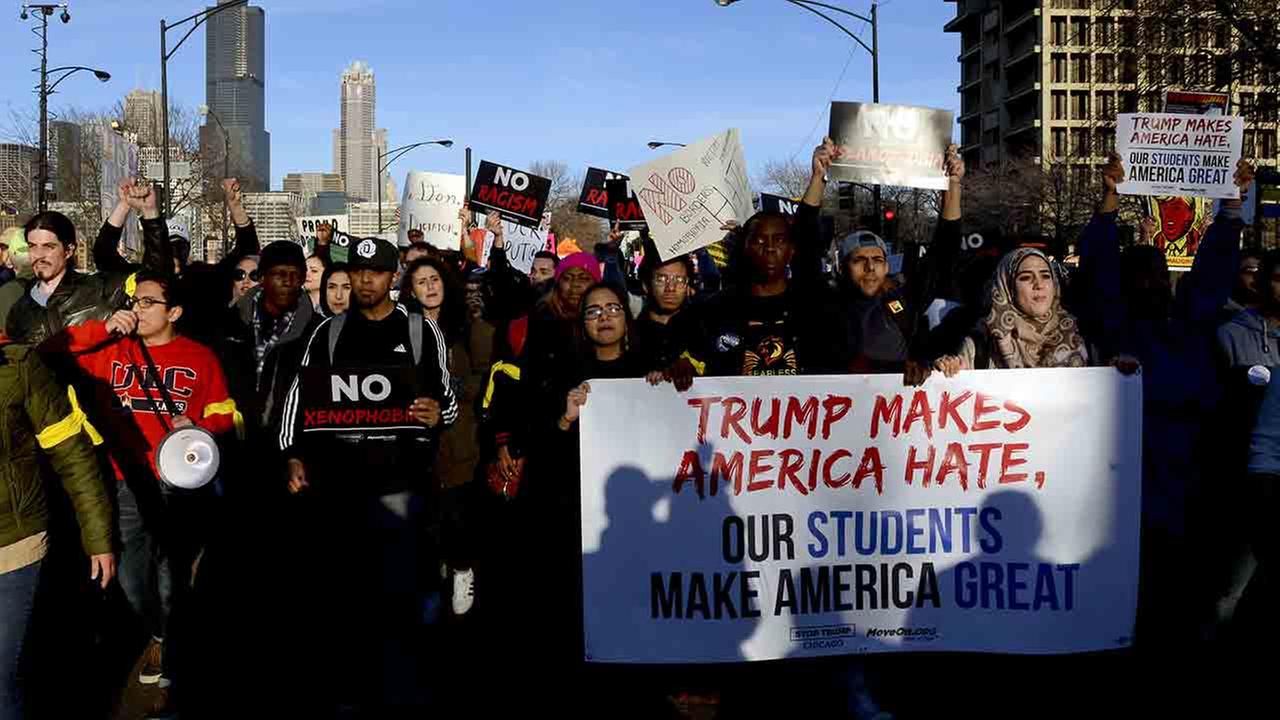 Facebook
Twitter
Pinterest
WhatsApp
Email
Print
Over the past week, there has been great controversy regarding the planned Donald Trump campaign rally at the UIC Pavilion. Previously scheduled to take place March 11, 2016 at 6pm, the rally was “postponed due to security concerns” pertaining to the massive protest against his campaign. Anti-Trump protesters came out in droves to show solidarity against Trump and his rampant bigotry.

As previously reported, after Trump’s campaign announcement protesters started a “Trump Rally Protest” campaign on Facebook to stand in solidarity against the Republican Presidential candidate that received 11,000 replies. Previously, UIC faculty members expressed concerns along with students about the rental of the UIC Pavilion to Trump, explaining that they feared for their diverse staff and the message Trump would bring to the University.

The majority of protesters at Trump’s rally were UIC students. Upon hearing that Trump postponed his rally, they shouted “We Stopped Trump!”

Never one to blame himself, Trump said that he does not take responsibility and believes that the protests are not directed at him, but at the direction the country is going.

ABC 7 News Chicago reported that a speaker took the stage to announce, “Mr. Trump just arrived in Chicago and after meeting with law enforcement has determined that for the safety of all the tens of thousands of people that have gathered in and around the arena, tonight’s rally will be postponed until another date. Thank you very much for you attendance and please go in peace.” The announcement was made at 6:30pm. There were a reported 7,000 people in attendance in the UIC Pavilion. It is currently speculated that when Trump rally organizers discovered thousands of anti-Trump protesters in the audience, they canceled the event.

Several minor scuffles broke out within the venue, though nothing major. Trump supporters blamed protesters for inciting the confrontations.

The media quickly jumped on the story and began projecting the protest as “total chaos” and spoke to a woman known as Cathy by phone. Cathy complained that she believed the police were not doing enough to move protesters out of the vicinity of a UIC parking garage she was apparently parked in. She reported to ABC 7 Chicago that, “everyone in the parking garage started to get weapons out of their car, they’re ready to fight”. Shortly after ABC 7 aired this caller, TV viewers saw police begin to allow drivers out of this parking garage. It is curious that this individual and others like her were so frightened when there were no reports of violence between protesters and individuals leaving the parking structure. The police held back the cars in the structure to allow the protesters to disband as they were exiting the Pavilion. By all accounts, they did a good job.

One student who attended the rally disputes these media claims stating, “I was in the protest outside the Pavilion, not inside. It was definitely not total chaos. Disruptive, yet peaceful. Only weapon we used was our voices. It was a beautiful show of unity. People of every race, religion, and background uniting against one bigot. We really made history tonight. It feels amazing. I have never been more proud to be a UIC student and a Chicagoan.” She continued, “I saw one person arguing with an officer, super close to their face, but other than that not much direct confrontation honestly.”

“The University of Illinois at Chicago worked with all appropriate agencies to address the security concerns associated with an event of this nature including the Secret Service, Chicago Police Department and Illinois State Police as well as campaign and protest organizers. The vast majority of attendees at today’s event exercised their Constitutional rights of free speech and free assembly peacefully. The abrupt announcement of the cancellation of the event created challenges in managing an orderly exit from the Pavilion, which nonetheless, was accomplished with no injuries or arrests.”

UIC student Adil said, “Outside was 100,000% peaceful. Today we stood up against oppression and told the world the best way to combat hatred is with love.” He continued, “Love will always TRUMP hate. We chanted, No Trump! No KKK! No Fascist USA. As a UIC community we showed the world we can change the world and that bigots aren’t welcome here.” When asked how he would describe the feeling about Trump rally cancellation, Adil replied, “Utter joy. It’s amazing. I felt as if today I became an American. I used my right to protest to free speech. Today was the best day of my life.”

A Trump supporter was reported on the local news saying that the protesters started the confrontations. Adil replied, “Absolutely not true. We have a right to protest as they have a right to say what they believe in. It becomes a he said she said argument. While we can’t know for sure, we do know one thing America won today.”

Whenever there is media coverage over a protest or rally, there tends to be a stereotypical reporting viewpoint. A viewpoint that projects hostility, violence and fear. While these key words create a compelling story that interests viewers and holds a captive audience, it is an inaccurate depiction of the facts and corrupts the actual story. Local media agencies could only focus on moments when they saw a large group running or protesters in the street, an instance that occurred as people were being cleared out of the Pavilion. (As the UIC Police Chief said, “the cancellation of the event created challenges in managing an orderly exit from the Pavilion, which nonetheless, was accomplished with no injuries or arrests).” Regardless of the cause, when there is a large group of people, orderliness rarely occurs. This does not correlate to “chaos”. These few images then became the talk of local news, where reporters wrongfully stated that protesters were out of control and that the protest was chaotic. By not reporting the whole story and selectively showing only cherry-picked images of coverage, the media has ignored the fact that while minor incidents occurred, nothing truly violent in nature happened.

When asked if the media portrayals of “total chaos” were an accurate description, UIC student Amaan said, “Nope not at all. Rowdy and rambunctious. But still PEACEFUL!”

Donald Trump took to Twitter voicing his opinion on the Chicago protest. He said, “The organized group of people, many of them thugs, who shut down our First Amendment rights in Chicago, have totally energized America!”

The Chicago Police Department’s Facebook page, thanked officers and partners in law enforcement for their, “dedicated service at last night’s event protecting the rights of free speech and demonstration to all in attendance.” Chicago’s interim police chief John Escalante reported that only 5 arrests were made the night of the protest.

Journalist and UIC graduate, Noor Wazwaz commented on Twitter, “When you use racism, bigotry, sexism as a part of your campaign strategy don’t be surprised when people start to protest #TrumpRally.”

There were many concerns for safety leading up to the event. In the end however, the protest appears to have accomplished its mission peacefully. To put everything into perspective, consider sporting events where fans leave the venue drunk and belligerent and then proceed to loot the city in celebration of their team’s victory. That is an example of violence and chaos. Now, consider the peaceful protesters, such as the ones who came to protest Trump’s campaign rally. They did not hurt anyone, did not loot, and did not put anyone’s safety in danger.