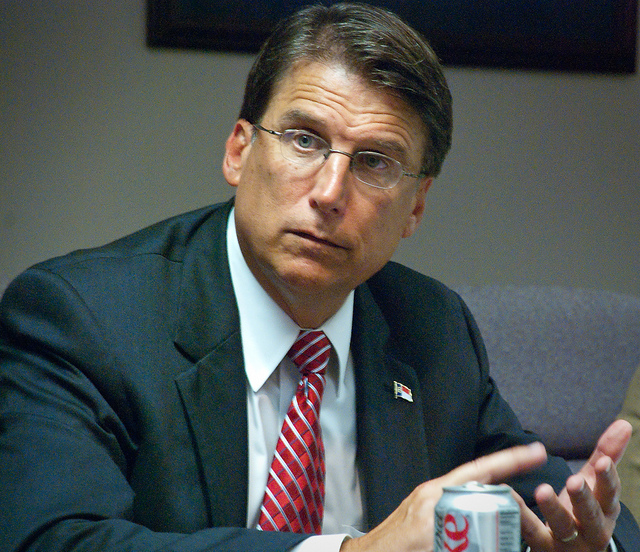 Facebook
Twitter
Pinterest
WhatsApp
Email
Print
On March 23rd, Governor Pat McCrory (R) signed bill HB 2, legalizing discriminatory practices towards military veterans and LGBT individuals in North Carolina. The measures of the bill prevent LGBT citizens from receiving anti-discrimination protection from their cities or counties, and using bathrooms of the gender they identify with. HB 2 also prevents veterans from having protection against discriminatory practices and blocks local governments from raising the minimum wage above the state level.

The bill passed with an 82-26 vote in the House of Representatives and a 32-0 vote in the state Senate. On March 22nd, Lt. Governor Dan Forest and House Speaker Tim Moore obtained support for a legislative session to discuss the bill. The $42,000 session, the first in 35 years, was in response to a pro-LGBT protections ordinance approved a month prior. On March 23rd, Governor McCory cited security concerns as the motivation behind HB 2.

“I signed bipartisan legislation to stop the breach of basic privacy and etiquette, ensure privacy in bathrooms and locker rooms,” McCory said.

“I’m not scared of transgenders. That’s not what I think the problem is. Sexual predators are not good people,” Burton said. “They’re going to see this ordinance as a golden opportunity for fresh victims — our children. My 16-year-old daughter swims at The Y year-round. I’m not going to be able to confidently continue to allow her to use that locker room if this passes.”

HB 2’s legalization has brought a similar fear of public spaces to Carolina’s LGBT community, especially within its trans-population. Charlotte resident and trans-woman, Lara Nazario said the new law has changed her comfort level with places like public bathrooms.

“I would either be told that I’m in the wrong bathroom or I’d be outed as a transgender woman. This can often lead to violence or harassment, especially when there’s no protection in place for people like me,” she said.

Besides HB 2’s repeal of “50 years of non-discrimination efforts” and its effect on the LGBT community, it also effects economic change that North Carolina’s local communities want.

Fifty-eight percent of North Carolinians support raising the minimum wage, according to a study by the North Carolina Justice Center (NCJC), as current job trends are such that 89 out of 100 counties earn lower hourly median wages than the state’s median wage of $15.63.

An example of a need for change is seen in Wake County, where a 2 bedroom-housing wage was $17.65 in 2015. In Wake, North Carolina’s current minimum wage of $7.25 requires 67 hours/week to afford this housing, according to NCJC.  And the living situation has not improved this year either. In 2016 the living wage of one adult is $10.98 and one adult with three children is $33.14, according to MIT’s annual national study on counties.

The minimum wage has not changed since July 24th, 2009 while state’s such as South Dakota has a wage of $8.55, according to North Carolina Department of Labor and the US Department of Labor.  By barring a wage increase, HB 2 will keep residents under these conditions. Matthew Roberts, a Charlotte native and former fast-food worker said the bill is, “another sign showing the state of North Carolina doesn’t care about the working class people [sic].”

Corporations like PayPal, Google, the NBA, Twitter and local universities like Davidson, Duke, and Elon University have publicly voiced disapproval of the bill, citing how the bill contrasts their core values of inclusivity and equal rights.

A day after HB 2 was signed Google tweeted, “We believe in equal rights and equal treatment for all. This North Carolina law is misguided & wrong.”

The NBA echoed similar sentiments in a public statement saying, “We are deeply concerned that this discriminatory law runs counter to our guiding principles of equality and mutual respect.” The association said the bill might impact Charlotte’s ability to host the 2017 All-Star Game.

The most crucial development so far has been Attorney General Roy Cooper’s ruling against the bill’s legality. Cooper, North Carolina’s top law enforcer, said his, “his office will not defend the constitutionality of the discrimination in House Bill 2.”

The debate over HB 2’s legality remains ongoing. However, the outcome of this period in the state’s history will serve as a reference point for future laws that impact civil liberties.