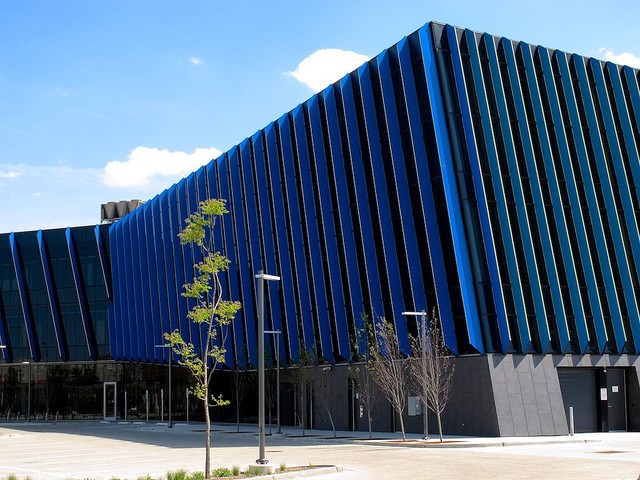 On Friday April 1, 2016 hundreds of people gathered in the university commons at Northeastern Illinois University (NEIU) to demand the state pass a budget to fund higher education. The theme of the rally was a New Orleans style funeral with music played by the NEIU band. Many groups joined the rally on Friday such as the Fight for 15, and teachers from the Chicago Teachers Union who were donned in red. Other protestors were dressed in black attire to mourn the death of higher education. Protestors brought their homemade tombstones, and there was a casket floating in the crowd.

The rally began with a march around the Chicago North Park neighborhood and then a morning of speeches. People like the Seattle City Councilmember, Kshama Sawant spoke, John Miller of the Illinois Local 4100 and many others. During pauses in the speeches chants broke out like “we need teachers, we need books, and we need the money that Rahm took!” Other chants included “Sí, se puede!” — “Yes we can!” The speeches emphasized hope. One speaker yelled out “Like the phoenix rising from its ashes we will rise” and the crowd cheered.

NEIU like many other universities such as Chicago State University, and Eastern Illinois University are feeling the brunt of the budget cuts.  Since March, it has become mandatory for NEIU employees to take one furlough day per week. These employees have had to face 20% cuts to their salaries. One employee at NEIU said the 20% cuts are costing him $800 a month. That is money he could be using to put food on his table, spend on his family, or pay for other necessities.

We are impacted by the cuts because our job is to serve the students in all kinds of ways, we help to enroll students, we help to recruit students, we help them get registered to graduate, and get financial aid. Right now we are facing furlough days, and a 20% cut in our pay because the university is so strapped for cash. We think this is a horrible situation that we cannot serve our students well, we cannot teach our students well, and our students cannot receive their funding to continue their education uninterrupted. This should not be happening but it is happening across our state. This is why we are united together today. It is unprecedented to have this kind of cut with no budget for ten months. So everybody is coming together from the community, from organizations, from schools, from universities, to say that it’s enough. We need to have funding, we need to have a budget, we need to have some control over our lives, and so that is what we’re doing today.

Faculty member, Olivia Cronk describes the impact salary cuts have, not only on her personal life, but also on the ability to provide a full education to her students.

Someone like me who has a $30,000 salary if I lose 20% of that over a year that would be about $6,000, but I am in a dual-income house and I feel like I have other things I can do to cut back. The money is troubling as an idea, but its not going to hurt my ability to pay my daughter’s tuition.

However, I hear from so many people who are alone on that kind of income, and if that money is cut from their salary then they are at risk of not paying rent, not paying a mortgage, not paying a child’s tuition, and other things that may be going unpaid. I think the budget cuts are demoralizing for everybody. In a more abstract way to be planning the rest of the semester and the fall semester intending to cut time out of grading or instruction seems really bad. It seems like counter to the entire project of public education. How could we teach a course knowing that we are going to be pulling things out of the course? At the lowest level this means for example my English 101 students this term who need this level of instruction to move on—I’m going to cut one of their drafts because there just wont be a way to figure out how else to squeeze in furlough days. So that means they wont be getting feedback on a piece of writing at the end of the semester and they wont be getting those points. So for students who are just starting on their academic path, they are already getting shorted right now. Doesn’t this mean if we’re cutting out bits of instruction and grading—doesn’t it mean that we are undermining the production and imparting of knowledge? It seems like a philosophical, existential problem that I do not think is necessarily felt immediately.

Right now, as it stands, my future is literally at the mercy of the state. Everything that I’ve worked for, everything that I tried to build can collapse like a house of cards. I tried to do everything right—working through high school, applying for scholarships, having a job, and maintaining a high GPA.

I don’t see how I could have done anymore to show my commitment to being here. I’ve always appreciated the Monetary Award Program (MAP) grant, I’ve always intended to respect the money being provided towards my education, and now I’m being told it is gone. I’m being told that the university I love, and that I work in is in danger. I see it’s suffering, of teachers and students alike. I see it everywhere. I see my opportunities being snatched away by passivity. I am being denied my pursuit of happiness because neither my family nor I make enough to pay for a private education. The services intended to prevent this are starving. The budget cut crisis means death to my education, and the education of those that dreamed of one day succeeding in their own pursuit of that same fundamental happiness.

The budget cuts as one Chicago Teacher’s Union member said “is affecting everyone statewide.” Schools and social services have been fighting for funding, and had to cut many programs just to stay afloat.

According to the Chicago Tribune, Lutheran Social Services of Illinois, the state’s largest social services agency, announced it would close 30 programs and cut 750 positions because it’s owed more than $6 million by the state.” The State Journal-Register expresses another particular social service being impacted by the budget cuts. “The partial shutdown of Helping Hands of Springfield, and the related layoff of four part-time workers, will allow the not-for-profit organization to avoid shutting down its shelter entirely — at least until June — as the agency continues to go without funding because of the state budget impasse…”

All of the people at the NEIU protest were united in their belief that the state is sinking, and people must demand funding for schools and social services. Many protestors echoed the feeling that hard-working people do not deserve this injustice. But the protestors also were strong in their demands for people to take action. They wanted people to call their state representative and senator to demand the funding that is so critically needed. There was a big push for people to get registered to vote and to sign a Moveon.org petition that calls for Governor Rauner to pass a budget providing funding for higher education. The teachers, staff and students at NEIU were also united in their belief that everyone had a role in fighting back against this attack on higher education.