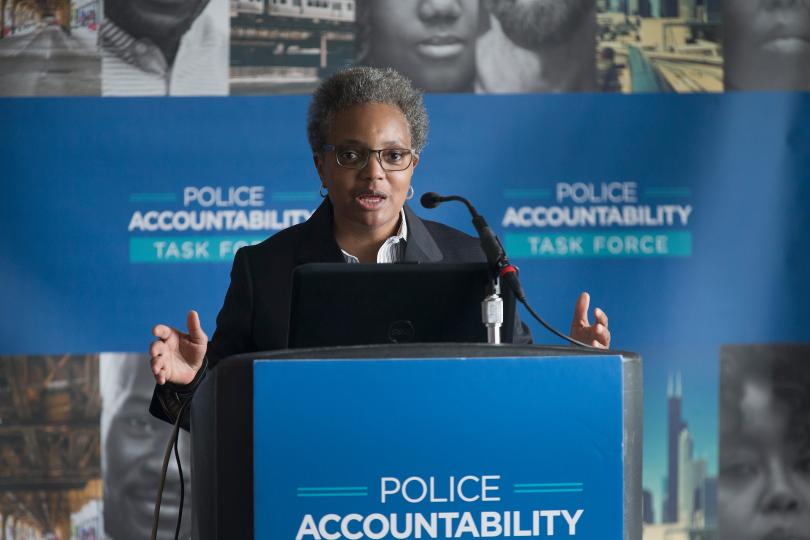 Early on in the Police Accountability Task Force Report a democratic principle is set forth, namely, that “The police need to know who they work for — the community. The authority that they have belongs to the people.” Yet nowhere does this report address the fundamental democratic right of the people to control the police and so we are left with suggested reforms and recommendations for policy changes that are left in the hands of the very people that created the problem in the first place. If the police in fact worked for the community then we wouldn’t be campaigning for community control of the police.

The document itself is called: “Police Accountability Task Force Recommendations for Reform: Restoring Trust between the Chicago Police and the Communities They Serve.” The powers that be have been so poised, so prepared for a report such as this that they wasted no time in pumping it up in the media as a giant step forward in at least embarking on the long and torturous road of reform.

This is a long and detailed report that examines in detail particularity the institutionalized racist practices of the Chicago Police Department going back several decades, showing that the lack of accountability and the practice of excusing and justifying police crimes and misconduct is long standing. Also this Task Force declares at the outset that “The Police Accountability Task Force arose amidst a significant and historic public outcry. The outcry brought people into the streets, on social media and other venues to say in a very clear voice that they had reached a breaking point with the entire local law enforcement infrastructure. People were and are demanding accountability and real and lasting change. The outcry was not localized in any particular neighborhood or demographic, although communities of color and those ravaged by crime added some of the most poignant commentary.”

Obviously the Black Lives Matter Movement and the broad based Black-led peoples’ movement for community control of the police (known in Chicago as CPAC) are the driving forces demanding police accountability. Therefore, we must approach this Task Force’s report and recommendations from the standpoint of whether it contributes to the campaign for an all elected Civilian Police Accountability Council (CPAC), and how it furthers the demands of Black Lives Matter Chicago, Chicago Teachers Union, BYP100, Assata’s Daughters, SEIU Locals 73 and SEIU HCII, Fight for 15, Trinity United Church of Christ, the Arab American Action Network, the Filipino Alliance, the Chicago Alliance Against Racist and Political Repression and others calling for justice now.

The Task Force report purports to be a response to the people’s movement demands for police accountability, but if that was the case the Task Force would’ve recommended that all those complicit in the murder of Laquan McDonald be indicted and that Dante Servin be fired.

Justice now means first of all enacting the ordinance establishing community control of the police, CPAC.  It also means:

While we stand in agreement with many of the Task Force recommendations, the fact is that the Task Force has no power to implement any of them. In addition, there are still issues, which are clearly not being addressed.

We agree that we arrived at this point of distrust in the police and the criminal justice system because of racism and racist practices. However, it is clear that the police cannot self-correct this problem through training. We must empower the people through CPAC to correct this problem.

We agree that there is a need to address a mentality in the CPD that the end justifies the means. Again we can’t rely on the police and their politician friends to self-correct this problem.

The people must be empowered to hold the police accountable for their crimes and misconduct, that is, the people who are presently powerless over the police must have the power to tell the police how they want their communities policed. CPAC will empower the people to write the rules with regard to the use of deadly force, stop and frisk, and every other aspect of police conduct.

The Task Force criticizes “Significant Underinvestment In Human Capital.” What this means is that racism has been allowed to dictate who polices our communities and how they police it. It means that from the training academy to the streets that police are given the mentality that they are to operate in our communities like an occupying army. There should be an intolerance for racist attitudes at all levels, but again this problem cannot be solved internally. It will only be correctly approached through community control of the police.

Basically this report is telling us that there are deep and abiding issues such as massive unemployment, debilitating poverty, untreated mental illness, drug addiction, etc., such conditions cause social unrest that in turn bring about mass protest, social rebellion, crime and mass incarceration. In our opinion the government’s failure to address these issues causes disorder and the police as a para-military organization, is called upon to maintain order and quell social rebellion. Police crimes represent a direct threat to any hopes of us living in a fair and democratic society. Police repression is an ever-present threat to all democratic struggles of the people and that is why we must fight for people power over police power.

No police Board! No IPRA! No Monitors, Auditors, or Overseers! Only Community Control of the Police! CPAC!

Aislinn Pulley is a lead organizer with Black Lives Matter Chicago. Frank Chapman is a Field Organizer for the Chicago Alliance Against Racist and Political Repression.