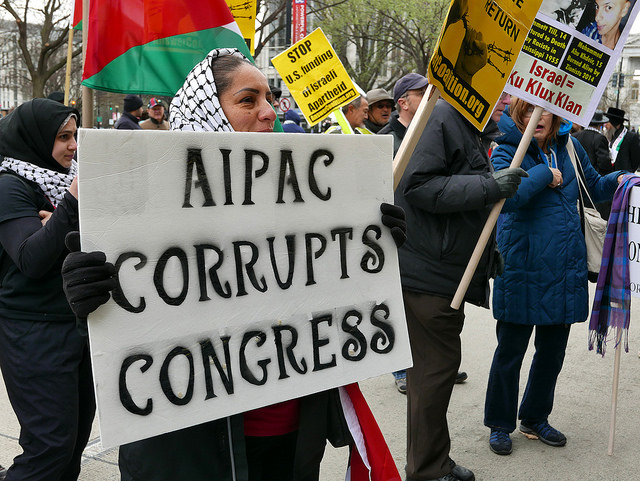 As most of you may know or have watched, Hillary Clinton spoke at the AIPAC conference on March 21, 2016. This conference is the most important pro-Israel event of the year. Usually there are more than 10, 000 attendees from community members to student activists nationwide as well as more than half of the US Senate and one third of the House of Representatives of countless Israeli and American policymakers and thought leaders.

Clinton’s attendance this year is not surprising, as she has attended previous AIPAC conferences. What was surprising was the type of rhetoric she chose to openly use, which is not in line with her representation, as an American leader, of American values such as equality. As a Palestinian-American, what frustrated me most while watching her televised speech and then reading the transcript, is the little acknowledgement she has of Palestinians. It’s as if we don’t exist; as if there is not a huge population of Palestinians here in Chicago yet alone in the US and dispersed all over the world. Palestinians identify as Muslim, Jewish and Christian. How can you, Hillary Clinton, possibly be the next president of the United States and say you are for a secure and democratic homeland for the Jewish people when Israel is actually home to Jews, Muslims, and Christians? There are people living under the Israeli military occupation that hope to be live alongside one another in peace that are Muslims, Christians, and Jews. That region of the Middle East is the spiritual home to all of these sacred religions.

I am glad to hear you have had the opportunity to visit Israel many times. I wonder if any of the friends you say you made were Palestinian. Some Palestinians under occupation are fighting for simple rights such as access to water and especially education. Many are detained and tortured for minor offenses or for no crime at all. For Palestinians who are arrested, 99.74 percent of cases end in conviction according to the Israeli newspaper Haaretz.

As Clinton states in her speech, there are “three evolving threats — Iran’s continued aggression; a rising tide of extremism across a wide arc of instability; and the growing effort to de-legitimize Israel on the world stage.” Even with possible effects of relieving some Iranian sanctions, it is important to abide by the Iran deal that American officials have recently signed. If we are going to work towards a peaceful solution with Iran, we should honor the agreement as long as Iran does the same. Clinton refers vaguely to the “rising tide of extremism” but it’s clear she is associating extremists with Iran and those that oppose the policies of Israel. Clinton’s last “evolving threat” to Israel – “the growing effort to de-legitimize Israel on the world stage” is a veiled attack on the Boycott, Divestment, and Sanction (BDS) movement. The non-violent BDS movement whose goal is an end to the military occupation of Palestine and human rights for Palestinians is included as an existential threat to Israel’s existence along with Iran and “extremists.” You can find Palestinians all over the globe, working in different ways to make sure that Palestine becomes free of the occupation they have been under for over 60 years. The accusation that the BDS movement is “de-legitimizing Israel” has no basis in fact. It is Israel’s military occupation of Palestine and violation of Palestinian human rights that is de-legitimizing an entire people.

From a Palestinian-American perspective, the only acknowledgement of Palestinians that you make in your speech is calling Palestinians terrorists. You insult all Palestinians when you accuse all Palestinian leaders of promoting violence. Many young people have built coalitions with people around the world to support the BDS movement. There has been an increasing number of victories in communities of faith (United Methodist Church, Presbyterian Church in the US), academic associations (American Studies Association, Association for Asian American Studies, National Association of Chicana and Chicano Studies, Native American and Indigenous Studies Association), contracts (e.g. Violia, G4S, TIAA-CREF, Caterpillar, Soda Stream), and at universities. For example, the student government at the University of Illinois at Chicago voted unanimously in February of this year to divest.

You say you want to make progress possible on the Israeli-Palestinian conflict when it has been going on for over 60 years. How can you be for a two-state solution when you are for an Israel-only Jewish-only state?

If you are for freedom of worship, then how can you compare Israel and America having similar democratic values, when your aim is for Israel to be a Jewish state?

Clinton stated in her speech at the AIPAC conference, “If you see bigotry, oppose it. If you see violence, condemn it. If you see a bully, stand up to him.” Israeli officials practice bigotry, so I oppose them. The ongoing Israeli occupation of Palestine is violent and I condemn it. Israeli officials are bullies and Palestinians have never stopped standing up to them. As a Palestinian-American, I have a voice and civic duty to let my voice be heard, which is why I will be at the polls in November as well as promoting civic engagement of others in my community.

I remember in high school thinking that eventually, things will get better for Palestinians, but more and more I am starting to believe that we are working backwards. I cannot really blame Clinton because she’s just playing her part/role in politics. In her AIPAC speech, she just happens to be the face of those who are anti-Palestinian. As a political science major, I struggle between trying to understand the political system, while also trying to understand the ignoring of the basic humanity of an entire nation of people. It does not have to be one or the other. No democratic political system can survive without supporting human rights for all of its people.