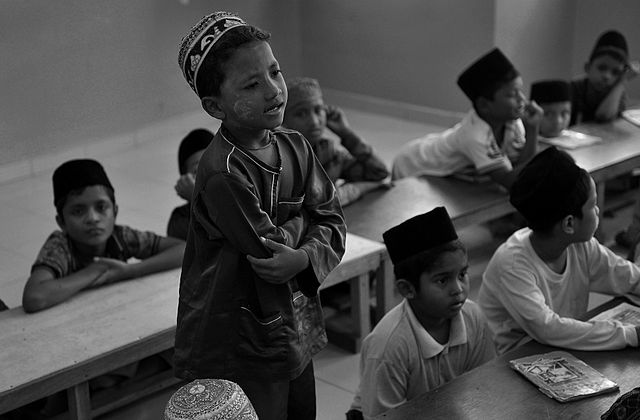 Sin Tet Maw and the surrounding Buddhist fishing villages in Pauktaw Township are very remote. With mountains on one side and sea on the other, interaction with the outside world requires a boat. Buddhist and Muslim neighbours have long relied on each other for trade and assistance.

This type of interfaith cooperation and harmony used to be the norm between various ethnic and religious groups in Rakhine state long before successive military dictatorships and extremists groups such as the Ma Ba Tha started to propagate narratives of exclusion and hate in order to divide communities. Prof. Michael Charney alluded to this point when speaking at a recent conference on the genocide against the Rohingya, noting that Rakhine state used to be marked by its: inclusiveness, tolerance, heterodoxy and diversity and was greatly influenced by ‘Persian, Islamic, Christian and Buddhist cultures.’

Rakhine state’s history of communal amity was deeply ruptured by the 2012 pogroms that targeted the persecuted Rohingya. Many Rohingya villages in Rakhine state came under attack from Rakhine Buddhist extremists, forcing Rohingya Muslim villagers out of their homes and into a life in squalid camps.

Indeed, since then other Rohingya villages have faced the perilous uncertainty of wondering “when the next attack will occur” and whether they face a fate similar to their brethren, one where they are consigned to living in a state of limbo in dismal “Internally Displaced Peoples” (IDP) camps. There have been several documented incidents in which extremists were poised to attack Rohingya villages but through the efforts of human rights activists, the Burmese government was moved to prevent a repeat of the 2012 atrocities which put Burma’s persecution of the Rohingya on display for the world to see.

Notwithstanding the fact that the IDP camps are, at least theoretically, supposed to be temporary in nature as a means to prevent further attacks, they have for all intents and purposes become a policy of segregation by the state; an outcome that was warned against by rights groups at the time.

Elsewhere in Rakhine, community tensions between Buddhists and Muslims remain at a flashpoint, but U Ka Lu (Muslim) and U Tun Aye Thein (Rakhine Buddhists) have joined together as community representatives to protest against an IDP camp on their doorstep. The camp, they say, poses a far bigger threat to good Buddhist-Muslim relations locally than the religious violence that drove the displaced people to their area in the first place.

Both men have arrived at the same conclusion, that the segregation between Muslims and Buddhists has changed the good relationship between the two communities. They can no longer go to the same schools, are unable to visit each other’s families and have become less and less familiar with one another. It seems like a daunting task to have the different communities live together in peace, especially in other places in Rakhine where fear and distrust are much more prevalent.

It is not surprising then where U ka Lu and U Tun Aye Thein lay the responsibility:

Here we’ve lived together for a long time, so we don’t think it will be a problem in the future for us to be living together again,” said U Ka Lu. “But in other places it depends on the government. All matters are decided by the government. Maybe they should just tell the people they have to live together peacefully.

In U Ka Lu and U Tun Aye Thein’s relationship, Burma’s government and society has a real life example that rebuts and defies the propaganda of extremists and hatemongers. If the National League for Democracy Party (NLD) and Aung San Suu Kyi had foresight and were truly committed to realizing the promise of an inclusive Burma, they would invest in a strategy that promoted the friendship and cooperation of these two leaders of their respective communities as a time-tested model that works; an asset for the future of Burma. Instead, and to the great astonishment and disappointment of the world, Suu Kyi and her NLD party have chosen a policy of appeasement to the hate mongers, following the course they have set in denying the Rohingya their right to self-identify.

Frits Sollewijn Gelpke is a human rights advocate and political scientist from the Netherlands, working as European Liaison for Justice for All / Burma Task Force USA. He co-authored a book on democratic and constitutional reform in Nepal where he worked for two years at an NGO, law college and the Dutch consulate. He holds a M.Sc. in Political Science, International Relations from Leiden University.