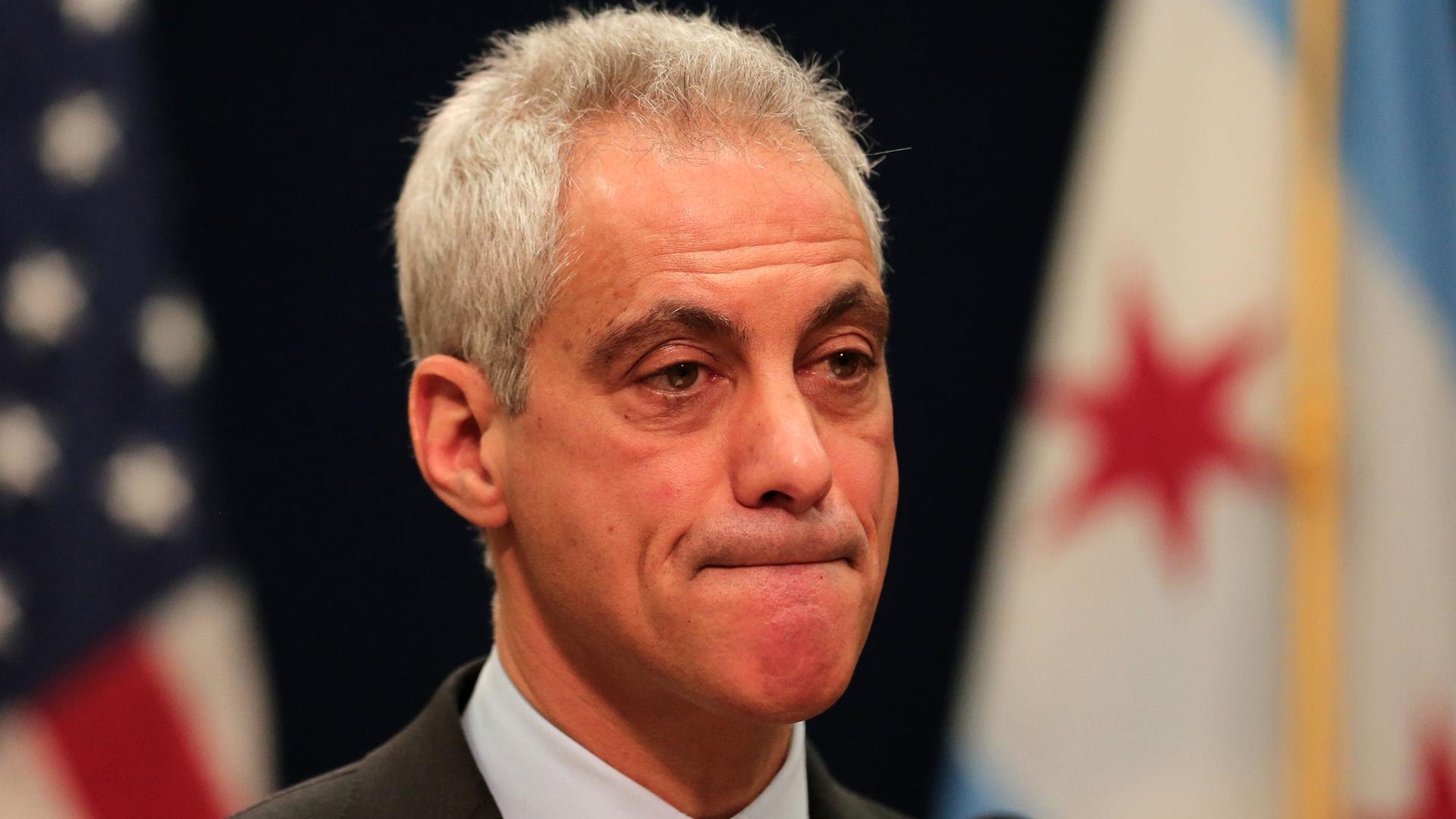 Facebook
Twitter
Pinterest
WhatsApp
Email
Print
We’ve all seen the video. It’s late at night, a young man walking down the middle of the street, lit up by the headlights from a half-dozen police cars. Everything is happening in an eerie silence, because the audio on the dash-cam has been intentionally disabled by the police.

Two Chicago Police Officers can be seen in the frame, guns drawn. The young man veers away from them. That’s the moment, the man stepping away, when something hits him in the side of his body. You actually see the impact sending debris into the night air as it tears into his flesh. He goes down. Still moving on the ground, until another impact, another cloud of debris. Then another. And another.

Then twelve more. Until he is finally still.

This is the video you fought so hard to suppress, Mayor Emanuel. For 400 days, it sat in a locked vault, while the family of a young man mourned his death, and while you campaigned for reelection. Another video, taken by the surveillance camera at a nearby Burger King, somehow turned up erased after a visit from the Chicago Police Department. Eye-witnesses were intimidated, held against their will and questioned for hours at a time.

When the official Chicago Police Department reports were published, they all stated emphatically that 17-year-old Laquan McDonald “lunged at police” with a knife, “swinging the knife in an aggressive, exaggerated manner.”

But it was all a lie.

When a court order finally forced the release of the dash-cam video, the entire city of Chicago learned the horrible truth. Laquan McDonald may have been a lost child that night, but he was never a threat to the police – not from the moment he stepped away from the squad cars and then was struck down by that first bullet. But Officer Jason Van Dyke kept firing, literally emptying all sixteen bullets from his 9mm semi-automatic into McDonald’s body. You can imagine him still pulling the trigger, even after all of his bullets are gone, and hearing the dry click of the hammer on an empty chamber. Until his partner has to stop him from shooting again after he reloads.

A full minute went by, Laquan McDonald lying on that pavement, disarmed of his 3-inch blade and riddled with sixteen bullets, before anyone thought to help him.

Your closest aides in City Hall all knew what this video contained, and of course they had to know what this would do to your chances of reelection. That’s why you signed off on a five million payoff to the family, even before they had decided to file a suit against the city. The election came and you barely kept your job, winning the first run-off in the city’s history, but even then you kept fighting the release of the video. We can only wonder if we’d still be waiting to see it, if the court hadn’t forced open that vault. The morning of the day that video was finally seen by the citizens of Chicago, literally just hours before its release, Officer Van Dyke, a man who had already had twenty misconduct claims filed against him during his career, was charged with First Degree Murder.

Only then, on that day, did you admit to ever having seen the video at all. We’re to believe you saw it the same time we did, and were just as shocked.

You can hide behind the wall of plausible deniability so obviously constructed around this case. But I know the people who live in this city can see right through that wall, and the shame is that most of them are probably not even surprised.

Business as usual in Chicago.

Since that day, the Chicago Police Department has once again been the source of a federal investigation (an investigation you initially opposed before you somehow changed your mind and welcomed). You fired your Police Superintendent, a man who was, by law, allowed only to strip Officer Van Dyke of his police powers, an action he took. But as Garry McCarthy said himself, “Somebody had to take the fall and somebody had to take the hit.”

Later that same month, another young man was gunned down by a police officer, and this time an innocent bystander, a mother of five, was also killed in the crossfire. Protesters gathered on the sidewalk outside your front door in Ravenswood. Even activists who once participated in your anti-violence campaign, people who were once among your biggest supporters, stood in the winter slush with their signs, asking you to step down.

As we moved into 2016, you watched Anita Alvarez, the Cook County State’s Attorney, go down in the Democratic primary by 30 points. I wonder how you slept that night, knowing the fate you had avoided. Knowing exactly what would have happened if you hadn’t kept that video hidden until after your own election.

You were presented with three candidates to take over as Police Superintendent. You passed on all of them, and took your own man from inside the department as an interim, a man who had never even applied for the job. As he goes from interim to permanent, we’ll see if an insider really can change a culture of corruption and brutality. Maybe he can, Mayor Emanuel, but there’s still one more thing you need to do.

I may have been born in Detroit, but Chicago is Detroit’s sister city, and it’s a city I fell in love with when I was writing The Second Life of Nick Mason. When I wanted to create a fictional group of police officers corrupted by the absolute power they’re given over the city, I didn’t have to go far into Chicago’s history to find the Special Operations Section, a.k.a. SOS, a real-life task force more corrupt than anything I could have made up. For years, SOS – known even then in certain neighborhoods as “Snatch on Sight” – broke into homes without warrants, stole money from and even kidnapped suspects. Ringleader Jerome Finnigan was convicted of conspiring to kill a fellow officer he suspected was cooperating with the federal investigation that finally brought SOS down in 2006. “My bosses knew what I was doing out there,” Finnigan said when he was sentenced, “and it went on and on. And this wasn’t the exception to the rule. This was the rule.”

Ten years later, you can draw a line right through these cases, going all the way back to Prohibition, through the 1968 Democratic convention, to the Midnight Crew that tortured over a hundred black men across two decades, to Homan Square, a place where suspects are routinely “disappeared.” All the way to a 17- year-old teenager named Laquan McDonald who was executed on the streets. The one thing this line never does is touch the one man who is supposed to be in charge of everything that goes on in the city of Chicago.

It never touches the mayor.

In my book, the hero ultimately triumphs over the dirty cops. But that’s not the way it works in real life. In real life, most of the cops get either light sentences or no punishment at all – like virtually every indicted member of SOS.

And in real life, the accountability never rises through the ranks. Not all the way to the top. Not even close.

“Obviously,” you said at one of your press conferences, “we as a city have a lot of work to do, and changing the policing culture will not and cannot be done just overnight.”

That may be true, but there is something that can be done overnight. Even quicker than that – it can be done right now. It’s something that has to be done, if you truly believe the city of Chicago deserves the chance to move on from these events. If you want to start turning back the daily tide of violence in the streets.

If you truly believe that all citizens, in every neighborhood, should have trust in their police force again.

The Police Accountability Task Force has just issued its 190-page report, what the Chicago Tribune called in its recent editorial a “devastating assessment of Chicago’s historic failure to hold police officers accountable for abuse of citizens, especially African-Americans.” In the same editorial, the Tribune asks you to “step back,” and to embrace the task force’s recommendations, including abolishing the Independent Police Review Authority, which isn’t independent and apparently doesn’t do much reviewing, either – unless it’s new ways to shield bad cops and to contain any damage that might touch City Hall.

The Tribune has already called your first feeble response to these recommendations “hugely disappointing.” Maybe we shouldn’t be surprised. But instead of stepping back, I have an even better idea, Mayor Emanuel.

It’s that simple. No more excuses. No more cover-ups. No more theater. You may be a career politician, a man with immense skill in winning elections, but history has given you this one chance to stand accountable, and to put your own sense of right and wrong above politics.

Show this city something new. Fire yourself.