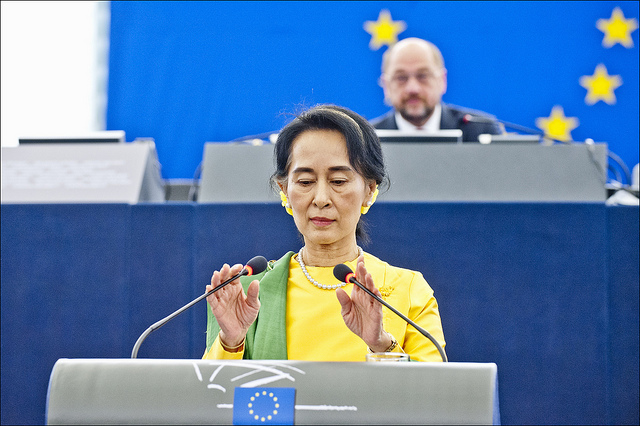 Facebook
Twitter
Pinterest
WhatsApp
Email
Print
In a recent press conference with US Secretary of State John Kerry, Aung San Suu Kyi, was forced to address the Rohingya issue. Up until then she had been conspicuously silent on the matter, her views were ambiguous and punctuated by an advisory sent from the Burmese Foreign Ministry she leads to foreign ambassadors “not to use the term Rohingya.” As we know this advisement was sent out after Burmese Buddhist nationalists held anti-Rohingya protests, demanding the name not be used. Suu Kyi caved to the extremists, lending more credence to the belief that she is either unwilling or incapable of repulsing the rampant hate perpetrated by fear mongering monks and their followers.

At the press conference Suu Kyi asked for more “space” to resolve the issue, but she also reiterated that the name Rohingya not be used since it is “emotive.” She differentiated herself from the hardliners by stating that the Rohingya should also not be called “Bengali.” Bengali is used derogatively by anti-Rohingyans to imply that Rohingya are illegal immigrants who came from Bangladesh. Other terms that she could have spoken out against include the racist use of “Kalar,” a term analogous to “n*****,” a part of everyday nomenclature and hurled in a dehumanizing fashion at Muslims. Questions remain after the press conference: if Suu Kyi is truly interested in tackling the issue, why is she caving into the demands of extremist nationalists? Why did she bar any Muslims in her National League for Democracy (NLD) party from running in the 2015 elections? Why has her party stated that the Rohingya issue is “not a priority?” These questions will continue to plague Suu Kyi until she makes substantive moves to quell the doubt that her actions have fostered.

This week, the NLD announced the creation of the The Central Committee for Implementation of Peace and Development in Rakhine State, which Suu Kyi will chair. The committee’s goal is to achieve “more stability and development” and will consist of 27 individuals, all of whom are either government cabinet members or Rakhine state representatives. This means that the committee will likely not have a single Muslim or Rohingya representative. Compare this with the 1949 creation of a Peace and Reconciliation Committee which had three Rakhine and three Muslim members; it would seem we are going backward. The fact that there is no Rohingya or Muslim representation is a serious cause for concern. Without any representation who will speak for them and their rights? Is Suu Kyi’s creation of the committee simply a way to deflect the criticism she has faced for the callous approach her government has taken so far? Social media reports among Rohingya activists have shared a video, which claims the committee has visited the MyayBon IDP camp, and “promised to do their best for the Rohingya.”

Thankfully there are more ways that Suu Kyi and the NLD can use their mandate to immediately address the Rohingyan plight and Rakhine grievances. One of the methods to achieve greater societal harmony and marginalize the voices of extremist hate is to capitalize and build on already existing relationships between Buddhists and Muslims. Organizations and individuals working to bring Rohingya Muslims and Rakhine Buddhists together online and on the ground are making in-roads.

Burma is a deeply religious and diverse society made up of hundreds of different ethnicities, speaking as many languages. The majority of the population, close to 80% follows Buddhism, while both Islam and Christianity together combine to make up 12% of the population. The rest of the populace consists of practitioners of the indigenous folk religions of Burma, as well as followers of Hinduism. Historically, its communities have coexisted with each other in relative peace and harmony. However, British colonialism sowed the seeds of conflict through imperialist divide and rule policies that pitted communities against one another. Since the founding of the post-colonial Burmese state, violent conflict, repression and persecution have characterized its internal relationship with minorities.

For most of the world, the power of religion in Burma was exemplified by the prominent role of Buddhist monks protesting against the military regime for a return to democratic rule in the nation. The protests were dubbed the “Saffron Revolution” in reference to the traditional color of the robes worn by Burma’s Therevada Buddhist monks. From daily prayers and rituals to the expectation that “Buddhist men in Myanmar will spend periods in monkhood,” Buddhism is a part of daily life in Burma. 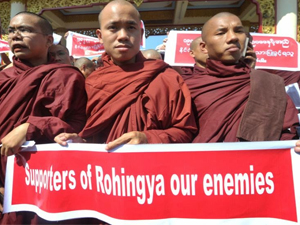 Burma. The 969 movement, active in the lead up to anti-Rohingya/anti-Muslim pogroms in 2012, used the symbolism and theology of Buddhism and wedded it to a Burmese nationalist discourse that targeted Muslims, especially the Rohingya in a campaign of persecution. Now going by the name of Ma Ba Tha, they have expanded operations, and are as powerful as ever: successfully drafting and lobbying for the passage of discriminatory race and religion laws last year, and pressuring the NLD to favor their extremist and exclusivist policies.

The antidote to this hate campaign and the power of rising fundamentalism is not the dangerous course Aung San Suu Kyi and her NLD party have chosen: i.e. capitulation to populist discourses advanced by bigots. Rather, true leadership should take the initiative, applying pressure by rupturing the operations of extremist organizations that seek to impose their monolithic and hateful message upon society.

One strategy that can, and should, be pursued in this regard is to promote narratives of inclusion. Burma’s unique diversity, and history of cross-cultural influence is an asset that should be developed to promote inter-communal harmony; interfaith activism is one tool to achieve this end. Interfaith activism in Burma takes several forms, and it must be noted, is also subversive in the eyes of the authorities, especially when it challenges the hate messaging of groups sanctioned by the state.

Currently, interfaith activism is most pronounced on social media where campaigns to foster greater understanding with the religious and ethnic “other,” and simultaneously resist online bigotry have gained success.

One powerful example is “The No-Hate Speech Project” which was launched this year to counter the prevalence of hate speech online. Such efforts are vital since fundamentalist organizations like the Ma Ba Tha, have used online activism and social media platforms to convey their messages of intolerance and to stoke violence between communities. The 2012 pogroms against the Rohingya were largely successful because of the extremist monks’ use of social media, where they pushed the fear-mongering message that Rohingya men were gang raping Buddhist Rakhine women, this led to reprisals against the Rohingya. The Center For Advanced Defense Studies, in a detailed report on hate speech narratives and their facilitators noted that social media is “a key disseminating channel for hate speech and hate speech related content, including material that can trigger large-scale mob violence.”

The No-Hate Speech Project operates by

Identifying an original post that contains hate speech elements and then discredits the hateful statements by countering with facts and alternative viewpoints. Since the project launched in March, it has responded to hate speech that targeted Muslims, women, ethnic rebels, and foreign workers. After finding hate speech posts on social media, they re-post the offending content on their own Facebook page, accompanied by debunking reviews and explanatory commentary.

This can be a very successful model for other social media activist groups to emulate, as it directly puts pressure on hatemongers, constricting them in a space where they have thrived, and indeed propagated false stories that have led to violence.

Previous interfaith activities have proven to be newsworthy events but their sustainability is questionable, especially since they lack consistent resources to rely on. Campaigns have included joint prayers by groups such as the Interfaith Alliance and others, there have also been blood drives and powerful prayer demonstrations against hate crimes.

Discussion panels between various religions are a staple of interfaith activity across the world often criticized or derided as ineffective. However, in conflict zones, it is an important activity, especially when it: i.) brings communities that have misperceptions (or do not encounter each other) together to meet and discuss their beliefs and faiths, resulting in ii.) the dispelling of fear, prejudices and myths about the ‘other.’

The context in Burma regarding the danger interfaith activists face deserves attention. A TIME magazine article from December of last year relates the story of an anonymous peace activist who received death threats from Buddhist extremists when he brought Rakhine Buddhists and Rohingya Muslims together in conversation.

It was late July, exactly one year on from a deadly bout of communal violence between Buddhists and Muslims in the northern Burmese city of Mandalay. The young activist, whose name has been changed to protect his identity, had been working on a series of peace-building initiatives between the two communities, which had fissured in the wake of several waves of violence since 2012.

The workshop had gone relatively smoothly, or so he thought. A second message, the following day, caused even more alarm. ‘You want to die? Why are you pressuring our monks?’ Myo grew increasingly agitated. As someone openly advocating interfaith harmony in a deeply divided society he was already too conspicuous for comfort.

In the same report other acts of intimidation are documented. Under the shadow of Buddhist nationalism some interfaith groups have had to switch tactics and move away from conversations about their faiths to focus on issues that have less potential to lead to persecution or reprisals from Buddhist militants.

These efforts, among many other such initiatives are ripe to be mobilized by a government with a mandate of change. Case studies from regional neighbor Indonesia has shown that interfaith efforts and the integration of “local religious institutions” can “substantively decrease the likelihood of communal violence.” Moreover, these “local religious institutions can play a pacifying role for a broad class of communal conflicts.” There is already evidence of such a strategy working in Burma, and the pivotal role that the Interfaith Religious Group of Mandalay played in “stopping violence from spreading” during 2014 riots targeting the Muslim populace.

Hopefully Suu Kyi and the NLD have finally realized that promises of “development” and “stability” cannot be achieved without a serious commitment to human rights and the dignity of all of Burma’s ethnic groups. A deeply religious society such as Burma’s can become an exemplar of tolerance and diversity once again, refuting the lazy bias of extremists who argue that religion only leads to violence and discrimination. This can be realized if the already existing capacity of seeing beauty and practicing the tenets of “love” and “compassion,” values shared by all of Burma’s religions, is harnessed.