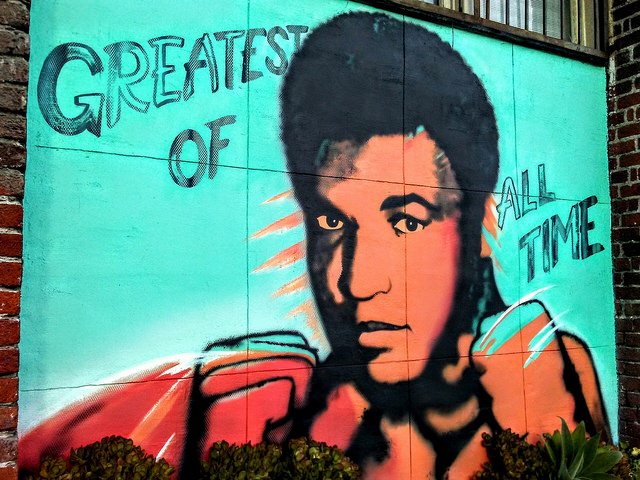 Before his famous predictions like “I’ll Just Say ‘Boo!’/He’ll Go in Two,” his time as a commencement speaker at Harvard, and bewildering Fidel Castro with magic tricks, Muhammad Ali was born Cassius Marcellus Clay on Jan. 17, 1942. 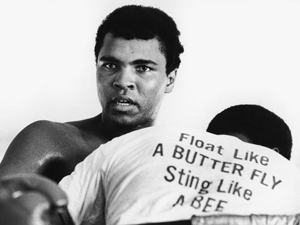 Ali professionally debuted on October 29th, 1960 at Louisville’s Freedom Hall and beat Tunney Hunsaker. Four years later on February 25th, he would beat highly favored Sonny Liston in a 7th round KO to gain his first world heavyweight championship and solidify his arrival.

His career pre-maturely halted on April 28th, 1967 when he refused induction into the US Army, citing his religious and anti-war beliefs. Shortly after, the World Boxing Association and various states stripped Ali of his world title and boxing license respectively. He was also denied a visa to participate in overseas fights.

Ali responded by moving to Chicago, then the center of the Nation of Islam. In an interview with the Chicago Tribune, Khalilah Camacho-Ali, Ali’s former wife and Chicago native, said this period of exile in Chicago would become “the most crucial time of his life.”

He was growing and learning more about the religion. He was learning about life. All of this was during the struggle of the civil rights period, and he saw the rise of racism and the effect of racism on him.

The US Supreme Court unanimously reversed Ali’s conviction on June 28th, 1971, allowing the 29-year-old to finish his journey to become ‘The Greatest’.

Three years later, a 32-year-old Ali beat George Foreman on October 30th to win his 2nd world championship. In “The Rumble in the Jungle,” he used his “rope-a-dope” strategy to win a KO within 8 rounds.

The following year, he flew to Quezon City in the Philippines to face rival Joe Frazier. After 15 rounds in a match he said was “the closest I’ve been to death,” Ali beat Frazier in the classic, “Thrilla in Manila.”

On September 15, 1978 he would beat Leon Spinks to become the only boxer in history with three heavyweight titles. He had given substance to being the self-proclaimed, ‘The Greatest.’

Globally, Ali impacted people with his humanitarian efforts and cross-cultural dialogue as much as he did as an athlete. He advocated for human rights and civil liberties worldwide, visiting North Korea, Russia, Cuba and other countries with differing political ideologies.

Ali visited Afghanistan to bring attention to its reconstruction needs and to raise financial support from donors. He delivered medical resources to Cuba during its embargo-era. He asked Iran to release two American hikers in 2011 and American journalist Jason Rezaian in 2015.

As a result of his actions, former foes and generations of entertainers, athletes, activists and organizations have experienced his impact.

George Foreman tweeted, “he’s the greatest human being I ever met, to this day he’s the most exciting person I ever met in my life.”

Retired NBA legend Kareem Abdul-Jabbar wrote on Facebook that part of Ali’s appeal was “his ability to be different things to different people.”

“To the anti-establishment youth of the 1960s, he was a defiant voice against the Vietnam War and the draft. To the Muslim community, he was a pious pioneer testing America’s purported religious tolerance,” Abdul-Jabbar said. “To the African-American community, he was a black man who faced overwhelming bigotry the way he faced every opponent in the ring: fearlessly.”

In a public response to Ali’s death, President Obama showed the reach of Ali’s international stature. “Ali is a name as familiar to the downtrodden in the slums of Southeast Asia and the villages of Africa as it was to cheering crowds in Madison Square Garden,” he said.

We saw a man who said he was so mean he’d make medicine sick reveal a soft spot, visiting children with illness and disability around the world, telling them they, too, could become the greatest.

The funeral will be in Ali’s hometown of Louisville, Kentucky and the city plans a memorial service for Friday.