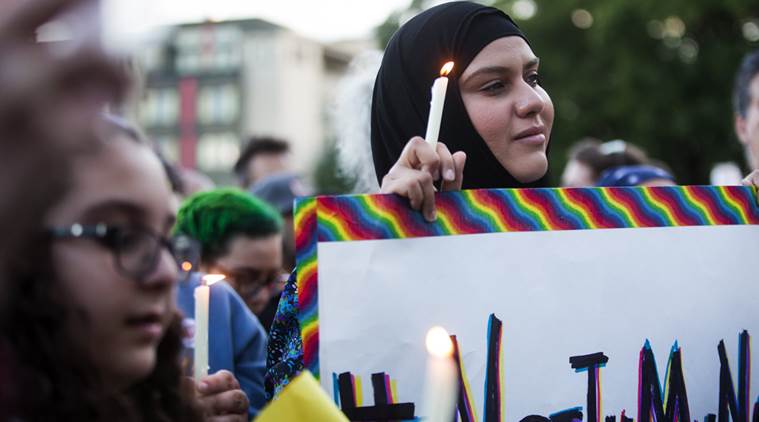 Facebook
Twitter
Pinterest
WhatsApp
Email
Print
Following the recent mass shooting at the Pulse bar in Orlando, Muslims took over the internet, expressing their grief, and giving their condolences to those affected by the attack. While I am pleased that many Muslims sent their love and support to the victims of this tragic incident, I was frustrated to see a large amount of Muslims once again coming to the defense of Islam.

I myself am a Muslim and realize the importance of uplifting and preserving the image of 1.6 billion Muslims – the vast majority of whom live peaceful, nonviolent lives. Combating Islamophobia is necessary, especially in the current political climate which has triggered islamophobic rhetoric and anti-Muslim hate crimes.

However, the usual “not-all-Muslims” response was especially frustrating, because it detracted from one of the most important issues about what happened: the majority of the Muslim community is in fact hostile towards the LGBTQ community. A large number of Muslims harbor homophobic beliefs, whether overt or internalized.

I am not disregarding or disrespecting certain Muslims’ views on homosexuality, whatever they may be. Rather, I would like to address the undeniable existence of homophobia within the Muslim community.

It has been reiterated multiple times by Muslims and non-Muslims alike that the actions of shooter Omar Mateen was not influenced by Islam, as he was “not religious.” But one does not have to be “religious” to be affected by dominant cultural beliefs in the Muslim community. Homophobia is a part of the culture of many religious people, it is present in “Eastern” countries and Western countries; it is perpetuated by many Muslims, Christians, and Jews; by many Blacks and Whites alike. To be exposed to anti-LGBTQ rhetoric, one simply has to be exposed to society.

In addition, it appears from recent reports that the shooter may be gay himself. That he would terrorize a bar which he often frequented suggests that, other than being psychologically unstable, he may have suffered from internalized homophobia as a result of a culture which excludes LGBTQ people.

LGBTQ Muslims are a marginalized group within the Muslim community. Some Muslims refuse to accept LGBTQ Muslims’ identity as both queer and Muslims, and thus renounce their practicing their faith. Others are simply ignorant of their existence and, intentionally or unintentionally, perpetuate the exclusion of queer Muslims from Muslim spaces.

No Muslim has the right to exclude any Muslim – regardless of their identity (racial, sexual, etc.) – from the larger Muslim community. Islam preaches mercy and compassion. It would be hypocritical of us as Muslims, to ignore these philosophies integral to Islam and continue to maintain divisions.

I see the same Muslims claiming that Islam is a religions of tolerance, practice intolerance towards LGBTQ Muslims. We cannot defeat islamophobia without allying with other marginalized groups and simultaneously fighting the oppressions they face. The Muslim community, and in fact, America as a whole, must foster a more open and understanding community, in order to enable understanding and unity, as well as to avoid such tragedies.

Rather than jump to the redundant explanations of “so-and-so is not a representative of Islam” and the overused statistics which depict that only a sliver of terrorist attacks are carried out by Muslims, we, as Muslims, need to address the prevalent issues in our community. We need to address racism, sexism, classism, homophobia, and the intersections of these oppressions. We need to ally with all marginalized communities. We need to create an inclusive space and welcoming environment for all Muslims to practice their faith, regardless of difference. We need to accept the true message of Islam: that of social justice, love, diversity, and inclusivity.