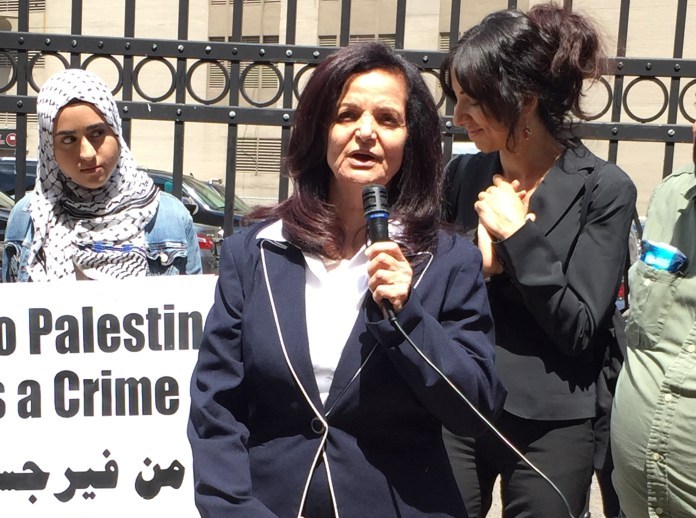 On Monday morning, over 100 of Rasmea Odeh’s supporters gathered from five states at the Federal Courthouse in Detroit to hear the results of her hearing on whether she would be allowed to present her full story and potentially be granted a new trial. In February, the Sixth Circuit Court of Appeals sent the case back to the original District Court Judge Drain, saying he had wrongfully barred the testimony of a torture expert that was critical to Rasmea’s defense.

At her trial, Odeh was not allowed to tell the full story of her conviction of bombings in Israel in 1969 that was the result of a coerced confession made after she was tortured and raped by Israeli military authorities. Odeh was originally arrested in 2012 for a twenty year old “naturalization fraud” charge that was “discovered” while Justice Department investigators were frustrated in their failure to charge or indict 23 Palestine activists in 2010 for “material support for terrorism.”

The appeals court ruling stated that the judge had misinterpreted existing case law when he excluded expert testimony that Odeh suffered from post-traumatic stress disorder (PTSD) when she applied for naturalization in 2004 and denied having been convicted of a serious crime or served time in jail.  As a result of that torture, Odeh was diagnosed with chronic PTSD by world-renowned psychologist and torture expert, Dr. Mary Fabri, which in the words of the appeal “blocked [Odeh] from understanding the time frame in the questions that were answered falsely.” The defense team argued she was not given the opportunity for a fair trial when the expert witness testimony was denied.

Odeh’s supporters held a rally outside the court before, during, and after the hearing. Representatives from a wide range of organizations spoke of the connection between Odeh’s case and many social justice issues.

Hatem Abudayyeh, one of the spokespersons for the Rasmea Defense Committee and national coordinating committee member of the US Palestinian Community Network (USPCN), provided the perspective on the day’s hearing.

“Rasmea did not get a full and fair shake at her trial. Hundreds of us took off work, left our families to come out and support Rasmea’s rights and to support the rights of Palestinians to fight for their liberation in this country and in Palestine…We lost that trial. We saw the inequity of it…But the appellate court said we were right and Rasmea was right – that her story needs to be told. The story of Israeli crimes, torture, and rape and the US support of those crimes will now be on trial in the US.”

Frank Chapman, field organizer for the Chicago Alliance Against Racism and Political Repression, tied the fight for justice for Odeh to justice for victims of police crimes and for all political prisoners.

“It’s not our country that is in a world of trouble; it’s the people who rule our country who are in trouble. Troubled times for them, momentous times for us. In Chicago, we are in the streets almost everyday demanding justice, fighting for a Civilian Police Accountability Council, and continuing to demand justice for Rasmea Odeh. No matter what it takes…we are going to get justice for Rasmea Odeh and for all political prisoners.”

Odeh’s prosecution has led to support from many immigrant groups who see her case as another example of an oppressed minority being persecuted for organizing for their rights. Nerissa Allegretti from the National Alliance for Filipino Concerns (NAFCON) stressed this point.

“Many Filipino and immigrant people and targets of the war on terror are fighting against the war machine. Like Rasmea, we try to fight and say the truth and there is repression. We are all Rasmea.”

Many Detroit organizations came out to show their support. Tawana Petty, from the James and Grace Lee Boggs Center, reiterated Nerissa Allegretti’s concerns for oppressed minorities connecting Odeh’s case to her own community.

“As a domestic violence survivor, I stand here on behalf of Rasmea and on behalf of my community to say that Rasmea is welcome here. As a Black community and as Detroiters, we need to stand up for other oppressed communities…We have to stand up for equality, justice and democracy for all communities. We can’t let what happened in Florida to go from homophobia to Islamophobia.”

Kristian Baily, from BYP 100 in Detroit, drew the connections between the experiences of the Black community and the Palestinians under occupation.

“Today we stand in solidarity with Rasmea and Palestine. Detroit is doubly occupied land, it was stolen from the Anishinabeg people and is currently being stolen from the majority Black population in the city…Black women and families are being evicted and kicked out of their homes every day. Palestinians are being kicked out of their homes by people who should have no authority over them. Water is under attack in Flint, in Detroit, and in Palestine. They are trying to control our resources in order to police our lives. Both here and in Palestine there are systems of incarceration to police and control our communities; to make us afraid to resist.”

Nadine Darwish from Students for Justice in Palestine described the widespread support Odeh has gotten on campuses across the country and how that support has led to solidarity between different student groups as well as with professors.

“Rasmea has been able to bridge the gap between campuses and communities for years…On campuses across the country, there have been actions large and small in support of Rasmea, bringing students from all different backgrounds and organizations together…On the day of Rasmea’s guilty verdict came at the same time as Darren Wilson’s non-indictment [killer of Michael Brown in Ferguson]…We saw that system that let the killer of an unarmed black teenager roam free while it jailed a community organizer…At Loyola, Black and Palestinian students joined together and organized a huge demonstration against the flaws in the justice system…This is not about unlawful procurement of naturalization. This is an attack on Arabs, on Palestinians organizing in their communities. This is an attack on sexual assault survivors. We will keep organizing until Rasmea gets the justice she deserves.” 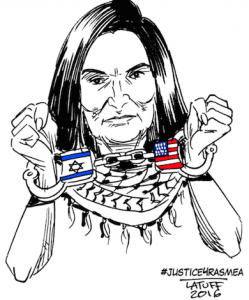 reason for the US government and Israeli intelligence to bring the case against Odeh other than “to criminalize activism and most importantly to terrorize Rasmea’s community.” He echoed Hatem Abudayyeh’s comments earlier when he described how Odeh’s case in on the front line in the struggle for Palestinian rights. “The last thing that the US government or the Israeli government would want is an open and fair trial in which the long record of torture in the Israeli prison system would come to light.”

Some of the other groups represented at the rally were the Cincinnati Palestine Solidarity Committee, and the Anti-War Committees from Chicago and Minneapolis.

When Rasmea Odeh’s defense team spoke to her supporters after the hearing, they said there was an entirely new prosecution team who appeared much more reasonable in their arguments. Jonathan Tukel, the prosecutor at the original trial was conspicuously absent and appears to be no longer involved. Assistant U.S. Attorney Jonathan Tukel had often emphasized Odeh being a “terrorist” in his comments during the trial and in prosecution papers had referred to Odeh’s supporters as a “protesting mob” in requesting additional security measures for the jury members. It’s highly likely his removal from the case was a rebuke for his handing of the original trial leading to the appeals court sending the case back.

At a press conference after the hearing, Defense attorney Michael Deutsch announced, “There is a tentative date for a new trial on January 10 of next year…but first a hearing is scheduled for November 29 and we will argue for the PTSD experts to give testimony in a new trial. The government will argue against the PTSD expert testimony being allowed…My reading of the judge is that he seems to lean to the fact that he is going to have to let her expert testify.”  Deutsch indicated that the prosecution appears to be looking for a detailed evidentiary hearing, but he is hopeful that the next hearing will be more of a quick decision by the judge to approve the PTSD expert and move on to the new trial. A new trial will mean a new jury and the presentation of all the evidence from both the prosecution and, this time, the defense. Rasmea Odeh is still free to return to her community until her next hearing.

The Rasmea Defense Committee indicated that they will continue to organize support on her behalf and are prepared to mobilize her supporters once again for the November hearing.