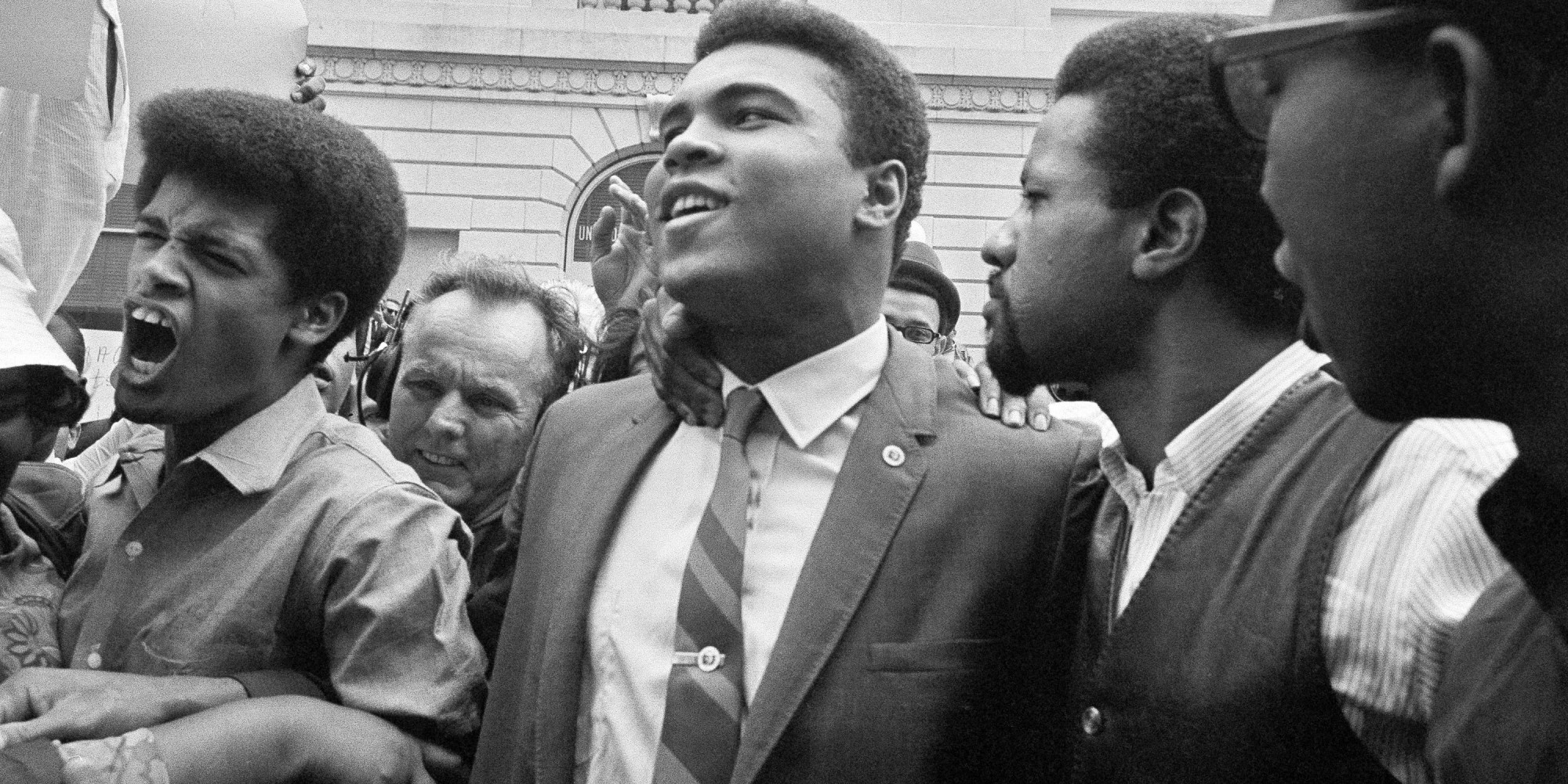 I saw a contemporary of my father, Adnan Askar, at a funeral a few weeks before the passing of one of the most important people of the 20th century, Muhammad Ali. Askar is a good man, a retired worker whom I’ve always liked and respected. He is from my parents’ home village of El Jib, considered part of the Jerusalem municipality prior to 1967, but redistricted into the Ramallah area after that year’s war and the beginning of the Israeli occupation of the West Bank, Gaza Strip, Jerusalem, the Egyptian Sinai Peninsula, and the Syrian Golan Heights.

My grandfather built a home for his family in Beit Hanina, a village in Jerusalem’s jurisdiction before the occupation, but nobody from the family ever lived in it. After 1967, they couldn’t get there because of the restrictions the Israelis placed on Palestinian travel from the West Bank to Jerusalem. So although almost everyone my age and younger in El Jib thinks of Ramallah as her markaz, the “center” of life, people like my father and Adnan Askar revere Jerusalem instead. And that generation of Palestinians also reveres Muhammad Ali.

He was the People’s Champion, of course, and that meant that he was our champion as well. No athlete ever commanded the fandom of Palestinians like Ali. Not Pele or Ronaldo, not Jordan, not anyone else. It didn’t matter how great his jab was, or how quick his feet; only that he was a Muslim, and that he believed in Black Liberation, as well as the liberation of all oppressed people everywhere. That included us, Palestinians.

Ever since Ali’s death on June 3rd, we have read hundreds of articles about his recruitment into the Nation of Islam; his political and ideological awakening brought about by months of conversation with and instruction from Malcolm X and others; and his bravery in the face of vicious jingoism and racism when he refused induction in the military draft that would have sent him to Vietnam, stating that his religion would not allow him to fight in a war. Those are the defining moments in his life, the decisions that made him one of the most famous humans on earth in the 60s, 70s, and 80s.

He became a legend because he represented the courage of all those millions of Africans and Latin Americans and Asians and Arabs who were fighting and winning anti-colonial wars of liberation across the globe.

He represented Black Liberation right here in the U.S. as well, and the Black Power movement it birthed, when a spectrum of organizations as different in beliefs as the Black Panthers, the Southern Christian Leadership Conference, the Nation of Islam, and the Student Nonviolent Coordinating Committee (SNCC) were all calling for freedom, justice, and equality for Black people.

He gave up almost everything when he uttered these classic lines in explanation for his decision to refuse induction:

“Why should they ask me to put on a uniform and go 10,000 miles from home and drop bombs and bullets on brown people in Vietnam while so-called Negro people in Louisville are treated like dogs and denied simple human rights? No, I’m not going 10,000 miles from home to help murder and burn another poor nation simply to continue the domination of white slave masters of the darker people the world over. This is the day when such evils must come to an end.”

“If I thought the war was going to bring freedom and equality to 22 million of my people they wouldn’t have to draft me, I’d join tomorrow. I have nothing to lose by standing up for my beliefs. So I’ll go to jail, so what? We’ve been in jail for 400 years.”

His championship titles were stripped from him; he lost millions of dollars in income; he wasn’t allowed to box for over three years; and he was threatened with prison time – all before he was finally exonerated by the U.S. Supreme Court, which did not quite uphold his “conscientious objector” status (the judges were not interested in setting a precedent for other Black Muslims), but ended his ordeal by reversing the criminal conviction on a technicality.

Ali returned to boxing, won his title back two more times (the first boxer ever to win the heavyweight championship three times), and continued his larger-than-life domination of sport and society.

But the most incredible aspect of the story is that he never would have carried a gun or fired a bullet if he had allowed himself to be drafted. Many famous athletes and entertainers in previous wars had participated only in exhibitions in front of their fellow soldiers overseas, and not in military operations. Ali could have made a similar deal, but he instead stood on principle and publicly excoriated his country’s racist, imperialist war in Vietnam. At a time in which the anti-war movement in the U.S. was huge and surging, he became the most popular anti-war activist around.

Now, I understand that Ali and his wife Lonnie had been planning his memorial for years, and they were the ones who chose ex-President Bill Clinton for the eulogy. But it is important to remember that Ali’s career and life were almost destroyed by his principled stance, and that he was ready and willing to go to prison for his beliefs. Clinton, on the other hand, who also opposed the Vietnam War, wrote a letter to a military officer when he was registering for the draft, stating that he would serve if selected only as a way “to maintain [his] political viability within the system.”

In addition, it has been difficult to read all the accolades from so many writers, like Clinton – who engineered and signed a crime bill that has been devastating to Black and Latino communities in this country – and other revisionist politicians, commentators, and journalists, who insist that Muhammad Ali “transcended race” and that he “belonged to everyone,” as Time.com headlined.

That is not acceptable. The same people who wanted to shut him up and throw him in jail do not get to claim him when he dies. Those who supported COINTELPRO, the demonization of Black Muslims and the Nation of Islam, and surveillance, infiltration, and assassination policies against the Black Panthers and many other Black Liberation organizations of the day, do not have the right to define him now.

Muhammad Ali was unapologetically Black, unapologetically Muslim, and unapologetically anti-exploitation, anti-racist, and anti-colonialist. The former Cassius Clay, who changed his name when he became a Muslim, forced those who rejected his conversion to call him Muhammad Ali. He was a freedom fighter. He stood up for an entire people and an entire religion, and demanded that others respect him and Black people as a whole, like he and they deserved. He was shouting #BlackLivesMatter to the whole world back then, and today, he would be marching with us to end racial profiling and entrapment, to #StopPoliceCrimes, and to demand #CPACNow – enact the Civilian Police Accountability Council (CPAC).

And that’s why I loved him and read almost every book and article published about his life. (Thomas Hauser’s Muhammad Ali: His Life and Times is highly recommended.) He became an international spokesperson for the Black Liberation Movement and for Islam in the U.S.  On this Eid al-Fitr, this end of the holy month of Ramadan, when Muslims learn and teach sacrifice, empathy, and unity, we should all remember this hero and his contributions to U.S. society and the world. He made Palestinians proud, because we too were striving for our people’s liberation. And he made people proud to be Muslim, just as I imagine he made tens of millions in the U.S., and hundreds of millions around the world, proud to be Black.

For years, I would often think about Ali’s illness, because my grandfather (the one who built our home in Beit Hanina, Jerusalem, Palestine) had Parkinson’s Disease, and I believe he died of it. A close friend of mine is one of the foremost researchers in the country on Parkinson’s, and she is not so sure that is what afflicted Ali. She thinks it was dementia pugilistica, which is a form of chronic brain damage that pugilists (from the Latin for “boxers”) suffer from, because of the hundreds and even thousands of blows they take to the head. Ali was no different, especially in a boxing career that lasted 22 years.

I remember one of his last bouts; the beating he took from his former sparring partner Larry Holmes, who was also a great champion. I remember crying my eyes out that night, because Ali was so soundly defeated. He had nothing left, and the fight was so one-sided that Holmes was almost too embarrassed to continue punching his idol and friend. Muhammad Ali lived an incredible life, but I have always wondered how much more he would have given society if he had not suffered from brain damage for fighting way beyond his prime.

And now back to Adnan Askar. When I saw him at the aforementioned funeral, my daughter was standing next to me. I introduced her to him, and he gave her a grandfatherly hug. After he walked away, I couldn’t help but tell her the story I love telling more than any other.

The Palestinians reading this remember the days when the entire village would celebrate someone visiting from the U.S. Well, in the 70s and 80s, the opposite would happen too. If someone from the village was visiting the U.S. from Palestine, everyone would go to O’Hare Airport. Not just the immediate family or the extended clan, but everyone. So, even though I can’t remember who exactly was visiting the States in this memory of mine, the Askars were there at the airport, plus my mother’s family, my father’s family, and maybe two or three others.

It was the late 70s, a few years before that fateful match with Holmes, and we were all waiting at the international terminal for this visitor to get through customs, when I spotted the magnificent Muhammad Ali about 30 yards away. I couldn’t believe it, and began chanting and yelling his name at anyone who would listen. Askar told me to quiet down a dozen times. “That’s not him,” he said in Arabic, “stop making a scene.”

I couldn’t stop, because I knew it was him. Ali didn’t have a huge entourage, but had attracted dozens of fans by the time he finally reached us. Of course Askar was shocked that the man was standing right in front of him, and looked over at me with a shrug of his shoulders.  Ali shook hands with each and every member of the entire El Jib contingent, responded to all of our As-Salaam-Alaikums with Wa-Alaykom-as-Salaam, and for some reason, chose me out of all the other children to put on a slap boxing exhibition with.

Ali was famous for his magic tricks and the enjoyment he had with children, but no magic this time; just 20 or so slaps to my face. He wouldn’t even let me get one slap of my own onto his cheek. “How do you think I stayed so pretty all these years?” he asked.