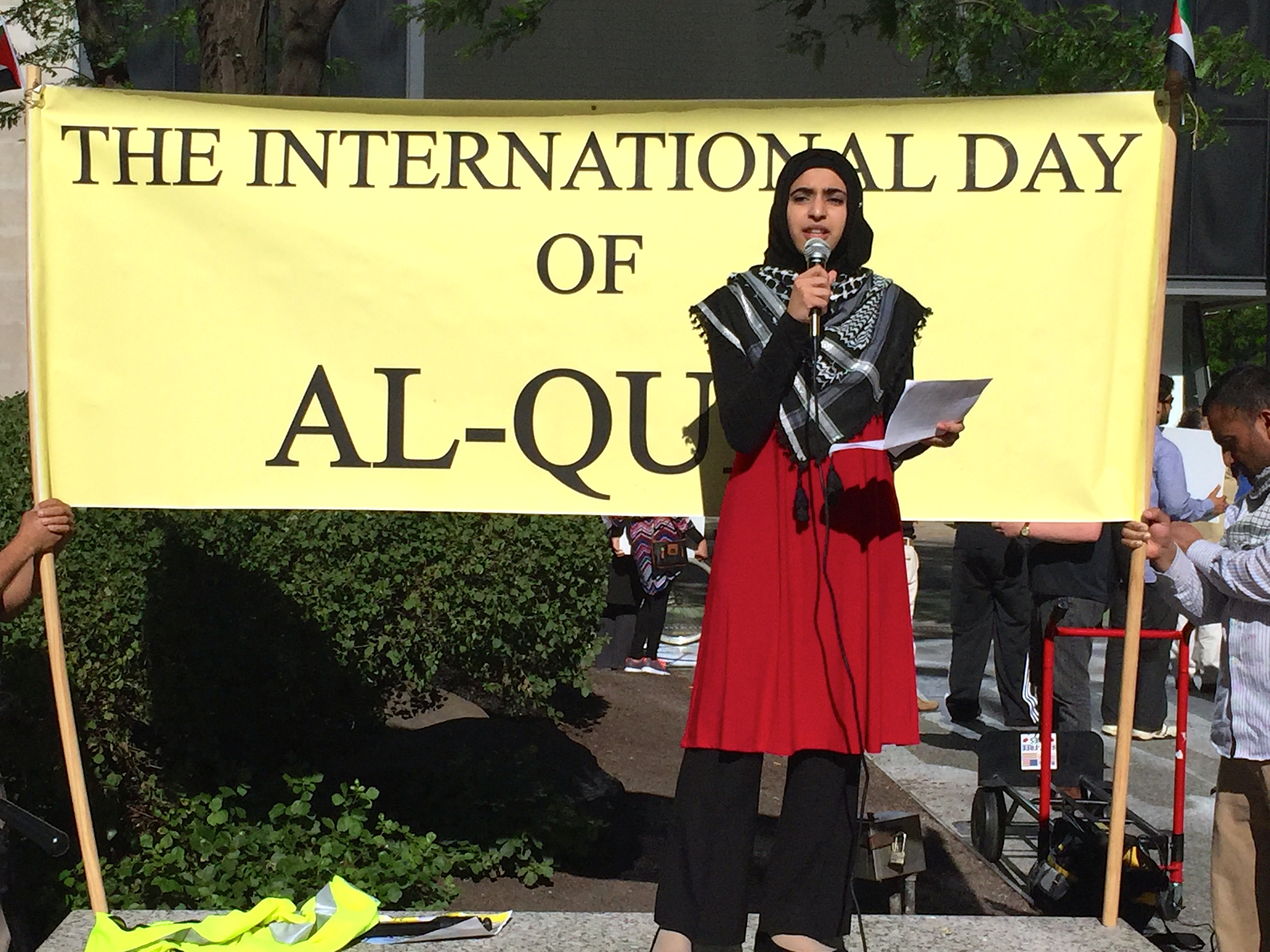 Facebook
Twitter
Pinterest
WhatsApp
Email
Print
July 1st marked the last Friday of Ramadan and International Al-Quds Day. At Daley Plaza in downtown Chicago, hundreds of protesters of all ages and religions turned out to stand with the people of Palestine and in opposition to the Israeli Occupation. The interfaith aspect of the day was apparent, as Hasidic Jews, Christians, and atheists turned up to support the mostly Muslim Al-Quds protesters. There was also a wide range of ages represented, from young children to teenagers to adults, and all of them had thoughts to share on the day.

The term Quds comes from the Arabic name for Jerusalem which has been the center of conflict between Israelis and Palestinians for many years.  As John Beacham, a protester and coordinator of the Answer Coalition in Chicago explained, Jerusalem, and specifically the Al-Aqsa mosque, is the center of Muslim worship. Beacham stressed the importance of people being able to worship where they choose to, stating, “The Israeli government is trying to not just take over Jerusalem but prohibit Palestinian Muslims and honestly Palestinian Christians from really utilizing those places of worship as a basic human right.”

The Islamic Republic of Iran first established al-Quds day in 1979 for Muslims to show solidarity with the Palestinians and oppose Israel’s occupation of the Masjid al-Aqsa and the Dome of the Rock.  It has become an international day of support for Palestinian human rights open to all. Al-Quds Day focuses on supporting a just peace for Palestine and opposing Israel’s control of Jerusalem. Every year since 1979, protests have occurred annually on the last Friday of Ramadan. The day is especially significant to Muslims because it is a day in which Muslims renew their faith and their devotion to God for the coming year.

Masooma Haider, a Chicago high school student, emphasized that the occupation and the denial of Palestinian rights is everyone’s problem.

“Lands of Palestinians have been stolen, homes destroyed, families torn

part…Despite the UN targeting Israel in 77 resolutions for its violations of human rights, attacks on Palestinians, and illegal settlements, no action has been taken to protect Palestinians from further harm. This isn’t just a Palestinian problem or an Arab problem, or a Muslim problem, now it’s everybody’s problem. Not a matter of Christianity, Judaism, or Islam. In fact, there are a large number of our Jewish allies standing here and across the world in solidarity with Palestine. They know and we know this is simply a matter of humanity.”

Andleeb Naqvi, a protester and host of the program Subh e Velayat, spoke to the importance of Quds day. She said, “We go and stand with the oppressed against the oppressor, against the tyrants, against everyone who is cruel and unjust.”  Naqvi emphasized that Palestinians have been deceived and “crucified for years and years” but also that the oppression of people is happening in places such as Yemen and Syria.

A counter-protest of five people was also present, some of who were members of the Jewish Defense League (JDL).

One counter-protester said that this was not an attempt to “incite” anything, they simply wanted to ensure that both voices were heard and that they are “very concerned about the sanctity of Israel and the safety of [Israel].”

Another counter-protester said that he felt that the timing of the protest was inappropriate, despite it being an annual event, because it was the day after a 13-year-old Israeli girl was murdered by a Palestinian in the occupied West Bank.

Naqvi, however, said that the protestors did not have any malintent, saying:

Her words truly captured the spirit of the event in that there was a strong desire to stand up for oppressed people around the world. As Naqvi put it, “regardless of where we are, we stand with them.”