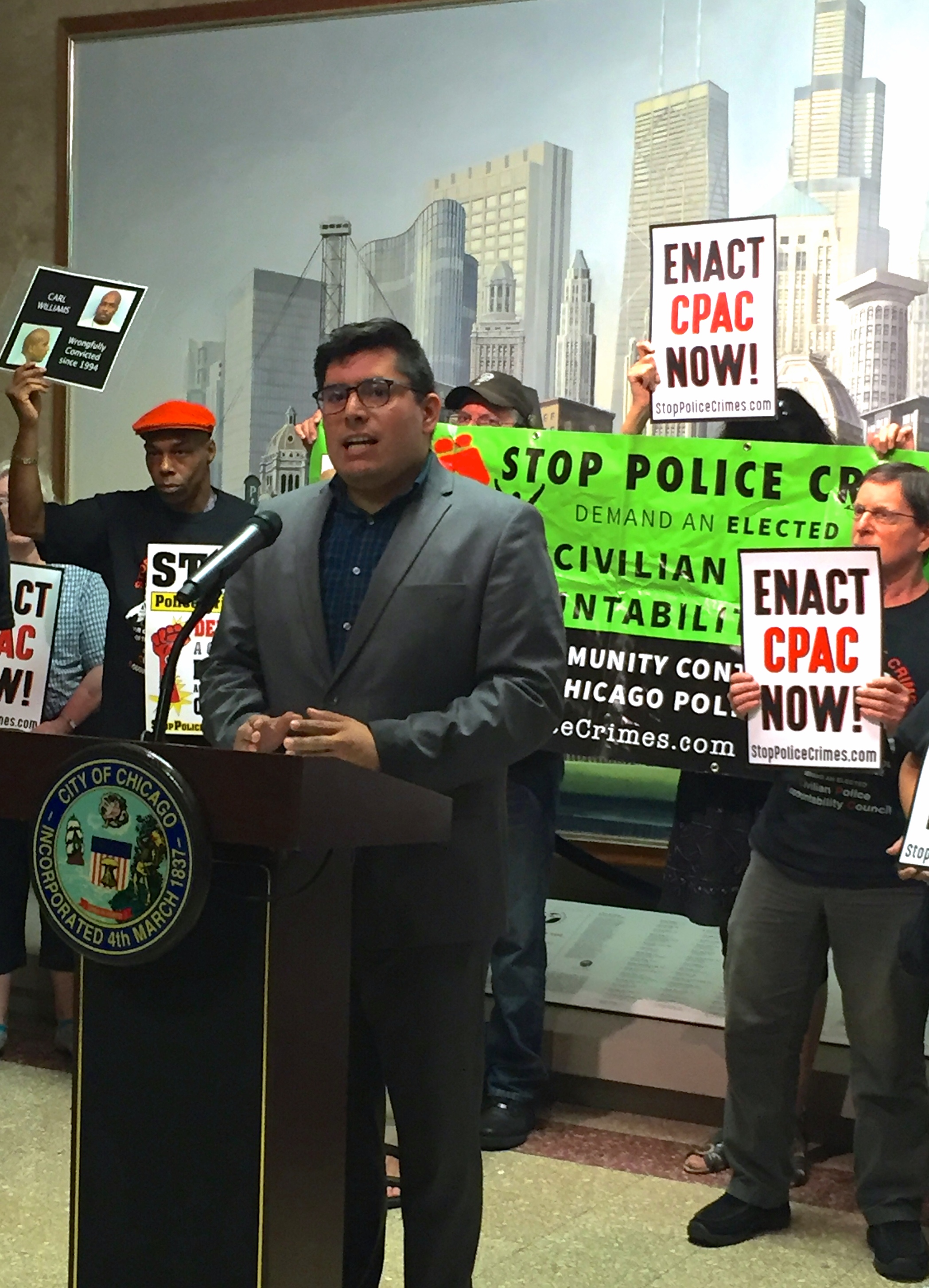 At a press conference at City Hall yesterday morning, Chicago Alderman Carlos Ramirez-Rosa (35th) announced that he plans to introduce a resolution to provide elected community control of the police at today’s City Council meeting. The resolution is for a Civilian Police Accountability Council (CPAC) that would be the first of its kind in the country. As Alderman Rosa said at the very beginning, “This isn’t my ordinance, it’s the community’s ordinance.” Standing behind him were representatives from the Chicago Alliance Against Racism and Political Repression (CAARPR), Trinity United Church of Christ, and members from SEIU Healthcare – one of the unions endorsing CPAC.

In August of last year, 3,000 marchers representing the Black, Latino, Arab, Muslim, and many more communities impacted by a history of Chicago Police shootings, torture, profiling, harassment and surveillance demanded the implementation of an elected Civilian Police Accountability Council (CPAC). The march was initiated by the CAARPR who have been fighting for community control of the police, in Frank Chapman’s words today, for “over 40 years.”  Last year’s march clearly demonstrated that the demand for civilian control over the Chicago Police had grown into a mass movement of solidarity between community organizations in the city. Now after countless rallies, marches, protests, occupation of City Hall, endorsements by the Chicago Teachers Union and SEIU Healthcare, and lobbying by the coalition, the CPAC ordinance will be introduced at the City Council meeting with endorsements by nine aldermen.

Alderman Rosa said he would formally propose the CPAC ordinance that will have twenty-two elected members, one from each of the Chicago police districts, serving for a four year term.

“Organizations from across the city have come together because they believe in police reform…It projects democracy into the system. No one should ever fear democracy. I’ve read this ordinance. I’ve helped make amendments to this ordinance. It is well thought out policy. While it hasn’t been done before, it could be a model for true police accountability reform across the country…Talked to experts across the country who say we have to look at the data; we have to look at models that have worked in other places. But the truth is in the current crisis no other model has worked.”

Frank Chapman, field organizer for the CAARPR, reminded everyone that the fight for community control of the Chicago police started long ago.

“We started with the Black Panther Party back in the late 60s. Fred Hampton and Mark Clark were the first martyrs in this campaign. Since then we’ve seen many other martyrs – Rekia Boyd, Flint Farmer, Laquan McDonald – all those who have died by the unwarranted force of the police…We want to pay tribute to them today.”

This press conference was not only addressed to the communities of Chicago who had organized for many years for this moment, but also to all those in the City Council who would eventually vote on the CPAC ordinance. Reverend Catherine Brown, herself and her family victims of Chicago police violence, appealed to the aldermen.

“I say to all the aldermen – it’s your constituents who put you there. You know the right thing to do, do the right thing for us all. Put an end to these protests. We need real rules, regulations, and programs to get results. We don’t want fake accountability. People have lost their lives.”

Jaquie Algee, VP and Director of External Relations for SEIU Healthcare of Illinois/Indiana, representing one of the largest unions who have endorsed CPAC spoke of the support of their 92,000 members for community control of the police.

In answer to a question of why CPAC had not been covered by the local media until recently and why it has been resisted for so long by the Mayor, Alderman Rosa said he couldn’t speak for the media, but his own interest came from his constituents handing him a flyer and his seeing the overwhelming support in his Ward for elected community control of the police.

The coalition has obtained the support of nine aldermen for the CPAC ordinance.  The movement for community control of the police can no longer be ignored by local media or by the Mayor. Getting CPAC approved and not watered down by the City Council will be a long fight. But getting past the Mayor’s resistance to any solution that takes Chicago policing out of his control, that will be the real battle.