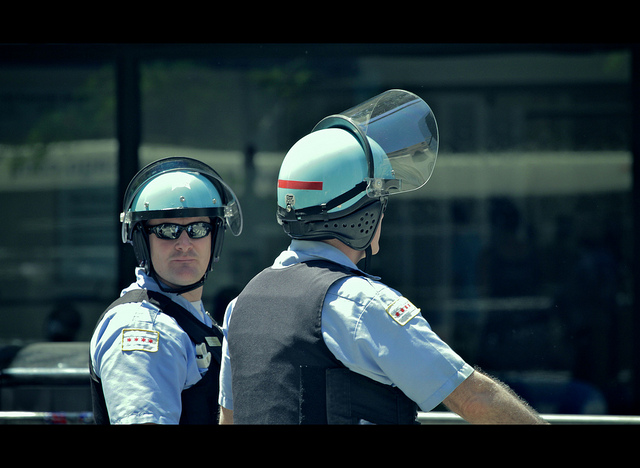 Facebook
Twitter
Pinterest
WhatsApp
Email
Print
The release of the Laquan McDonald video and the ensuing cover-up by the city of Chicago have revealed a part of the sordid political workings of the Rahm Emmanuel administration. In his attempt to maintain the status quo, Rahm ignored the recommendations of the Police Board he appointed, and installed Eddie Johnson as the Superintendent of Police, the same Eddie Johnson who on March 29, 2016, claimed to never have seen police misconduct during his 27-year career with the Chicago Police Department (CPD). Rahm clearly picked the right man for the job of continuing the cover-up.

The problem is, not all of us were falling for the scam. That’s when the blitz began. On June 20, 2016, Eddie was on a panel at the City Club of Chicago along with Democratic Party nominee for Cook County State’s Attorney, Kim Foxx, Father Michael Pfleger, and Cleopatra Pendleton, mother of murder victim Hadiya Pendleton. Initially, it looked as if Eddie’s presentation would be the pabulum one would expect from a puppet. That’s when he dropped a bombshell. He announced that he had established within the department a Bureau of Professional Standards (BPS).

Now, at first blush, this might seem harmless enough. But here is the back-story. On June 6, 2016, Police Accountability Coalition (PAC) members met with the Corporation Counsel for the City of Chicago, Steven Patton. The purpose of the meeting was to provide Patton with some of the ideas that the PAC had come up with in order that they are included in Rahm’s proposed ordinance for police reform. That proposed ordinance was to have been announced on June 22, 2016. During that meeting, the issue arose as to who was in the best position and best trained to investigate police misconduct. That’s when Patton floated the notion that police detectives are the answer. They are the best trained, and they know the CPD system inside out, Patton asserted. Naturally, a hush fell over the room. That’s when Patton dropped the other shoe: the Office of Professional Standards (OPS) should be resurrected. OPS was discredited in 2004, and replaced by the Independent Police Review Authority (IPRA). Patton was told in no uncertain terms that resurrecting OPS was a bad idea. However, fast-forward two weeks, and Eddie announces at the City Club of Chicago that he has established the BPS. OPS has re-arisen. And who will do the investigating of police misconduct? In all likelihood, it will be CPD detectives.

But the whitewashing isn’t done. On Friday, September 23, 2016, Eddie is due to be the keynote speaker at the Federal Bar Association Annual Installation Luncheon. No doubt he will extol the virtues of the many changes he is making which include peace circles, hiring more Black cops, more training, addressing Rahm’s task force recommendations as well as the recommendations of the Department of Justice, now conducting an investigation into CPD practices. But underneath it all, there is the BPS, brazen, stark and ugly.

Rahm Emmanuel’s gall appears to be boundless. Not only has he no contrition for the Laquan McDonald cover-up, but also his solution to the problem of police accountability is to resurrect within the CPD the very office so roundly discredited years ago. His plan for reform is clear. There will be none.