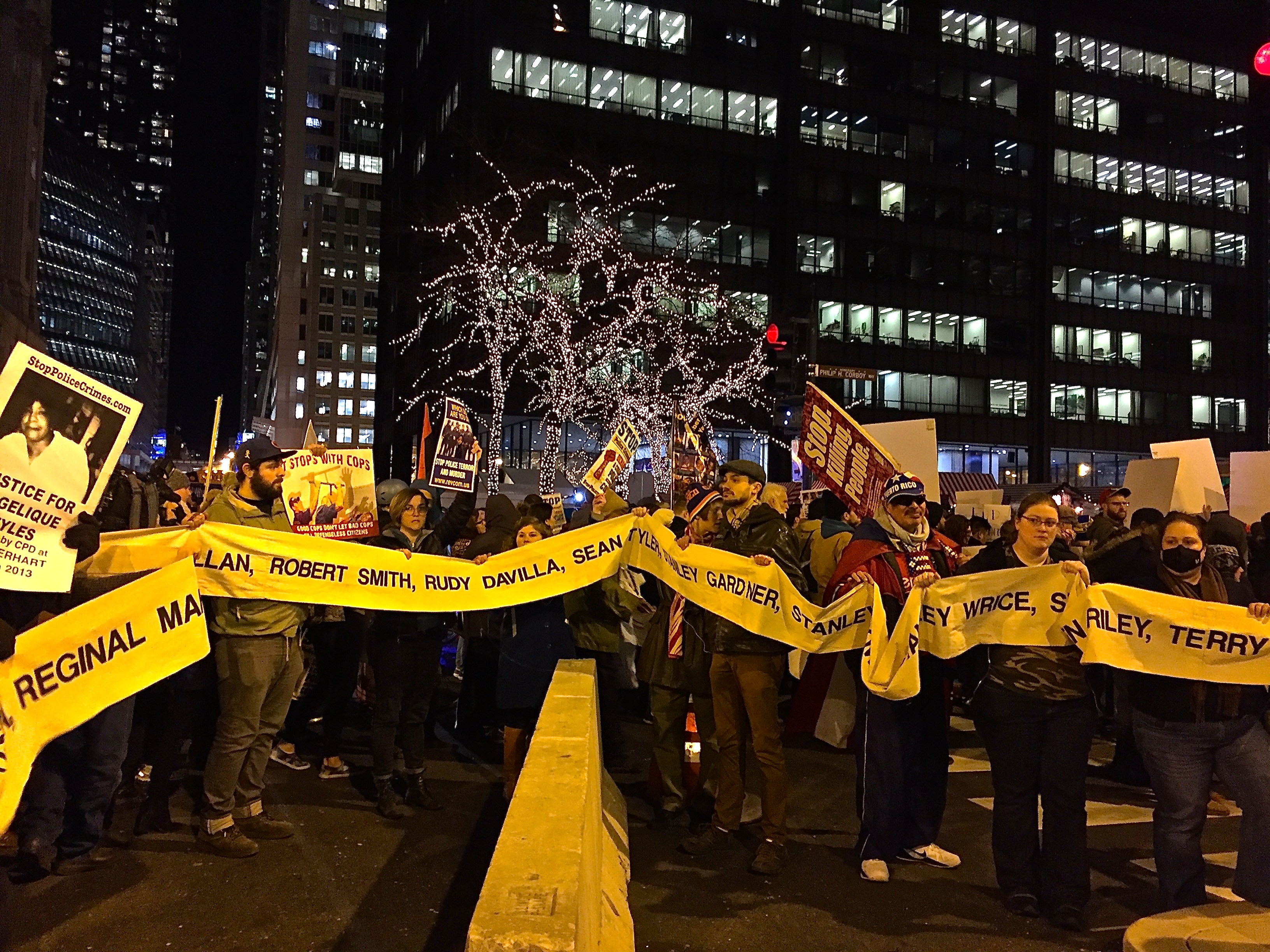 In October, President Obama traveled to Chicago to deliver a speech before the International Association of Chiefs of Police (IACP).

“Right here in Chicago, Mayor Emanuel and the Chicago PD have spent the past few years working to build on this philosophy, forming new partnerships with ministers, putting more officers on bikes and on foot so they can talk with residents.”

It would be safe to say that “putting more officers on bikes and on foot so they can talk to residents” has done nothing to stop police shootings in Black and Latino neighborhoods and has done even less to make sure that police officers who commit unjustified killings are held accountable. Chicago’s Independent Police Review Authority (IPRA) has investigated nearly 400 police shootings (fatal and non-fatal) since 2007 and found only one to be unjustified. In that time there have been zero police officers in Chicago that have lost their job, been convicted of a crime, or served time in jail. 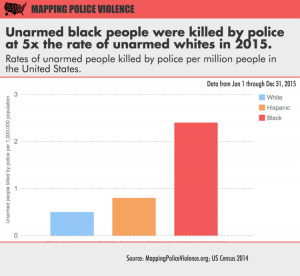 Over the last four days, there have been three Black men killed – Alton Sterling in Baton Rouge, Philando Castile in St. Paul, and “Lone wolf” Dallas police shooter Micah Xavier Johnson. Five Dallas Officers have been killed – Brent Thompson, Patrick Zamarripa, Michael Krol, Lorne Ahrens, and Michael Smith. The only killings where the shooter has been held “accountable” are the five Dallas officers when Micah Xavier Johnson was killed by the Dallas Police using a bomb equipped robot.

Just considering last year when there has been greater attention paid to police violence with the killing of Michael Brown by the Ferguson Police in August of 2014, these are the statistics:

It’s clear that whatever solutions are being tried, they are failing to address the problem. And, there is little to no police accountability for these shootings.

A Washington Post database that tracks fatal shootings by police shows a 6 percent increase in the number of such deaths during the first six months of 2016, compared with the same period last year.

Fatal encounters are strikingly similar to last year’s shootings: Blacks continued to be shot at 2.5 times the rate of whites. About half of those killed were white, and about half were minorities.

Minorities do not make up half the population.

The one solution that has not been tried is an elected community police accountability council that will rapidly review all accusations of police misconduct and shootings.

At the start of City of Chicago hearings on July 6, forces pushing for an elected Community Police Accountability Council (CPAC) blasted the city for ignoring a solution that had been available to them for three years. The Chicago Alliance Against Racism and Political Repression (CAARPR) has sent copies of the proposed CPAC ordinance to the Mayor and aldermen several times over the past 3 years.  Over 35,000 signatures have been gathered throughout Chicago in support of the ordinance, and the offices of many aldermen have been inundated with postcards urging them to support it.

Over 3,000 people from communities across Chicago marched on City Hall last August demanding passage of this ordinance. This is what The Chicago Monitor wrote at the time when the local media ignored any reference to CPAC in the march.

“Marchers represented the Black, Latino, Arab, Muslim, and many more communities who had been impacted by a history of Chicago Police shootings, torture, profiling, harassment and surveillance. The march was initiated by the CAARPR who have been fighting for a Civilian Police Accountability Council (CPAC) for many years. Now with the momentum built by CAARPR, Black Lives Matter Movement, We Change Genocide, Fearless Leading by the Youth (F.L.Y.), Black Youth Project 100 (BYP 100), and many other organizations, Saturday’s march clearly demonstrated that the demand for civilian control over the Chicago Police has grown into a mass movement of solidarity between community organizations in the city.”

Since then the Mayor rejected all three nominees from his appointed IPRA to replace Chicago Police Superintendent Garry McCarthy and named Commander Eddie Johnson from within the Chicago Police Department (CPD); a Task Force appointed by the Mayor severely criticized the CPD for their procedures and lack of accountability; the Mayor has recommended abolishing the ineffective IPRA and proposed that the old equally ineffective Office of Professional Standards (OPS) be resurrected so police review would once again be conducted by the CPD itself.

“We don’t need hearings on a structure that doesn’t exist,” declared Frank Chapman. “There is no police accountability structure in Chicago.” Chapman is Field Organizer for CAARPR and Chairman of the Stop Police Crimes Organizing Committee (SPCOC). “We need hearings on the proposal for community control of the police, on the bill creating an all-elected all-Civilian Police Accountability Council, CPAC,” Chapman said.

The CAARPR and Black Lives Matter – Chicago are calling for a mass demonstration at the Federal Building in Chicago at 4:30 Monday demanding that the Department of Justice prosecute police officers who have murdered Black and Latino people.

“The Chicago Alliance Against Racist and Political Repression condemns the shooting attack on Dallas police which will some will use as a provocation aimed at turning the tide against the movement for police accountability…We reject any effort to hold the movement for justice – which has always been a non-violent mass movement – in any way responsible for this crime.”

important than ever before stating, “It is the only path toward ending the violence of a policing system that has institutionalized racism and is killing an average of 1,000 people nationwide every year. Black and brown people are disproportionally victims of this police violence.”

Larry Redmond, general counsel for CAARPR, put the demand for CPAC in Chicago in the context of the shootings in Baton Rouge, St. Paul, and Dallas.

“After the killings of Alton Sterling, Philando Castle and five policemen in Dallas, a lot of attention has begun to focus on the concept of policing reform across America. It is a shame that it took these deaths in order to focus that attention. However, if genuine reform results from them, they won’t have been in vain. To be certain, they will serve as a catalyst for the CAARPR to double-down on its effort for community control of the Police Department in Chicago.”

After 3,000 Chicagoans marched last August for CPAC; after 102 unarmed black people were killed by police in 2015; after 491 police shootings so far in this year; after Alton Sterling, Philando Castle and five policemen were killed in the last four days; and after the refusal of Mayor Rahm Emanuel to make any real changes to police accountability in Chicago – it’s far beyond the time for the Chicago City Council to pass the resolution for an elected Civilian Police Accountability Council.

The mass movement of Black, Latino, Arab, Muslim, and many more communities in Chicago will once again be out at the Federal Building on Monday to demand CPAC be implemented now – hoping this time Mayor Rahm Emanuel and the City Council will listen.